Change is Good, but Soul is Better 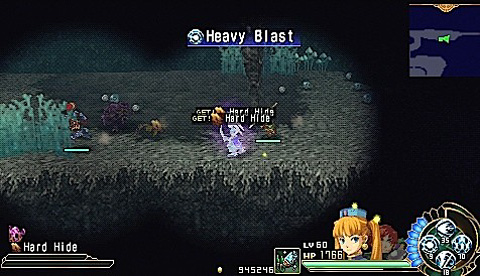 HIGH The pulse-pounding boss fights are some of the best in the series.

LOW The story is easily one of the worst.

WTF Sanitized or not, I never thought I'd see a torture scene in an Ys game.

Ys is not a series known for pushing the envelope. Each new installment comfortably reiterates those that came before. The series didn't even have an "attack" button until until its fifth entry, demonstrating Falcom's steadfast commitment to the series's roots.

In gaming, stagnancy frequently foreshadows decline and doom, but the right series with the right developer can occasionally break this rule. Ys is one of those rule-breakers, owing largely to Falcom's clear understanding of what makes the world of Ys compelling.

With Ys Seven it's obvious that Falcom questioned that understanding and decided some big changes were in order. It's a shame that many of those changes are for the worse.

As Mike mentioned in his review, the most obvious revisions are to the combat, and these changes are pretty positive. Dodge rolling, special attacks, and additional party members add nuance to the very standard gameplay the series has been rocking for some time now, and effectively complement the hyperactive pace that has set Ys apart from its genre peers. In particular, some of the boss battles have a measured insanity that feels more akin to combo crazy actioners than to a top-down action-RPG.

The addition of party members has benefits that extend beyond combat mechanics. Since his earliest adventures, Adol has befriended a broad cast of characters, many of whom are characterized as perfectly capable fighters. Until now, Ys games have invented excuse after excuse as to why these warriors couldn't accompany their dear friend on his most dangerous trials. Ys Seven dispenses with all of that. Unlike so many other legendary heroes of gaming, Adol has never been much of a loner, so the sight of him charging into battle with his allies at his side is both welcome and long overdue.

Unfortunately, that about sums up the positives. While I was glad to see Adol fight alongside his companions, I was less enthused to hear them talk, and talk, and talk. Ys Seven frequently puts the brakes on the fun to stuff players with exposition, whereupon each party member feels the desire to reiterate the obvious in their own words. This is an experience that does not grow more charming with time. 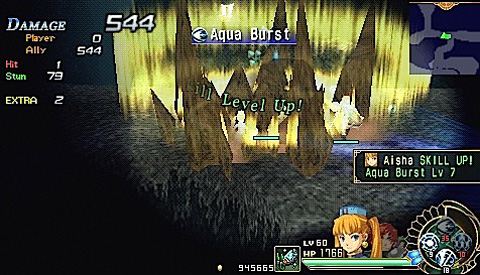 In general, Ys Seven is way too proud of its story. The series has never been known to have a mind-blowing narrative, but its simple, unobtrusive tales worked well as a kind of gaming comfort food. Not only does the story of Ys Seven fail in this regard, it is trotted out and given center stage far too often, and for far too long. In a nutshell, Adol and co. must visit five dragon shrines (representing the elements, natch!) to restore balance to the increasingly chaotic land of Altago, and that's it. With such a basic premise there is no reason to force players to spend a half-hour just walking around and talking to people. Occasionally I'd find myself with a snatch of time to kill, and thought I might spend them playing a portable game on my portable game system. Foolish me, as these sessions were frequently devoted to reading inane jabber.

The uninspired storyline has repercussions for the gameplay as well. Running the gamut through elementally-themed dungeons is one of the oldest and most insipid ideas in game design since as far back as I can remember, and to see it practically celebrated here is disappointing. Ys Seven is so in love with elemental dungeons that it forces players to go through a second circuit of them immediately after completing the first set. While these are technically new dungeons, it's hard to get excited about a cave full of magma after you've already seen a temple brimming of the stuff. In the first round, Ys Seven's settings are serviceable, if uninspired. In the second, they're flat out boring, and I was eager to see them end.

Another misstep is the unnecessary inclusion of a crafting system. If said system were interesting or in any way unique that would be one thing, but its so elementary I have to wonder why it was included at all. At its greatest depth, crafting only requires the player to find X number of Y components and take them to a local shop. The developers must have realized this wasn't exactly groundbreaking design, so in addition to getting drops from defeated monsters and designated farming points, the field is littered with treasure chests that contain ten monster spines or twenty moon stones. They may as well have scrapped the crafting and filled those chests with cold hard cash or better yet, actual equipment.

The reason the crafting system (and its associated "treasure" chests) earns so much of my ire is because it exchanges the simple-yet-charming way Ys used to handle equipment for something utterly soulless. In previous installments, Adol had a very hard limit on his equipment and accessories. The menu consisted of a few rows of empty boxes, each one silently urging players to seek out the wondrous treasures that would make them whole. Opening chests was a near-monumental experience, because they were guaranteed to have something special inside. By contrast,  Ys Seven has scads of items for all of its characters. These items are bought or crafted or found in chests, and no sooner are they equipped than exchanged for something incrementally better. The Menu of Implied Destiny has been traded for a charmless loot machine that never stops grinding.

If it isn't obvious by now, a lot of my time with the game was spent reminiscing for the old days. While doing so, I discovered a small distinction between this title and the rest that perfectly encapsulates their fundamental difference. Every single one of the previous entries carried a subtitle: Ancient Ys Vanished; Wanderers from Ys; Dawn of Ys; Kefin; The Lost City of Sand; The Ark of Napishtim. This game is simply Ys Seven, and that really says it all. Rating: 6.0 out of 10.

Disclosures: This game was received via retail purchase and approximately 23 hours were devoted to the single-player storyline (completed 1 time).