Not so Massively Multiplayer 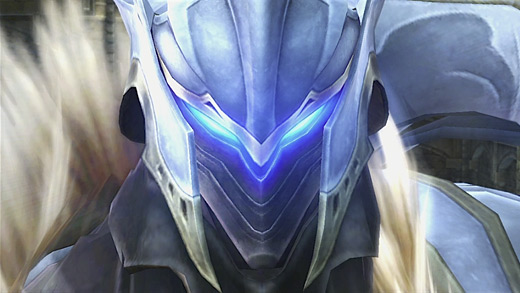 LOW Some of the most obtuse menus I've ever seen. Whoever was in charge must be a maze fetishist.

White Knight Chronicles is a game in the midst of an identity crisis. Confronted with a project that included both a full length single-player storyline and a robust online component, it seems Level-5 was unable to make tough decisions on where to direct their focus during development. The result is an oddly blended game, with its two primary gametypes inseparably intertwined yet jarringly distinct at the same time. Chronicles awkwardly welds the two modes, but punts on presenting either one as the primary experience.

Before even watching the opening cinematic, I was tasked with designing an avatar (via a surprisingly detailed character creation tool) who would act as an envoy to the online world. Strangely, this avatar silently accompanies Leonard, the story mode's hero, and his party throughout the offline journey, never being acknowledged by the characters or world that surround him. In an almost literal sense, the specter of online play haunts a single-player campaign that doesn't believe in ghosts.

Both modes share the same gameplay which, surprisingly, is not action RPG. In keeping with the overall sense of schizophrenia, the action is explicitly geared towards online play. Chronicles can be described as a massively-multiplayer online RPG, or MMORPG, minus the "massively" part. Instead of having scores of players occupying persistent worlds, Chronicles smashes that format down to a fraction of its usual scope.

While it might take thousands of hours to see all the content in an average MMORPG, Chronicles can be reasonably explored in about 60, and online excursions are limited to a modest four participants. Further borrowing from the MMORPG playbook, battles are optimized for minimal lag, so quick, dexterous button mashing is tossed in favor of preset actions which are measured against variables to produce consistent results. Even offline, attacks initiated from within combat range will still connect if the target has since moved miles away. Besides a couple neat wrinkles that save the game from being completely derivative, such as a universal cooldown time and the ability to create custom combos, I found myself doing the typical MMO business of setting skills to the action bar, waiting for cooldowns, and occasionally scrounging in the bushes for crafting materials.

Level-5 wisely recognized that MMORPG combat couldn't carry a single player campaign, so the difficulty of the game is dialed way down. In a word, Chronicles is easy. My party fumbled through most of the game completely under-equipped, since I spent most of my money and resources on my online town and personal avatar (more on that later), and I still steamrolled all comers, scrubs and bosses alike. The titular White Knight stands as a brilliant punctuation mark to this design, acting as an on-demand godmode for whenever things get too dicey. This isn't a criticism. It's to Level-5's credit that they opted for a painless experience instead of catering to an imagined obligation to challenge (read: frustrate) the player. The result is a relaxed campaign that might not stand up on its own, but functions well as a complement and (very) extended tutorial to the greater online component. 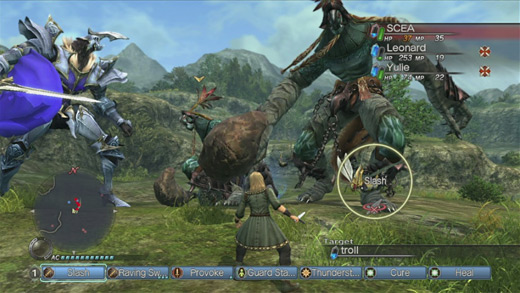 Online, players can design personal towns which can be uploaded to serve as a user-generated lobby for others to shop and organize quests. I spent an embarrassing amount of time playing musical buildings in an effort to create the perfect hometown, and the (expensive) desire to expand and improve on it only became more consuming over time.

The quests, which are the bread and butter of the online mode, are significantly more challenging than anything the main story has to offer (no White Knight here!) and gave purpose to the mute protagonist I had created at the start of the game. The act of keeping his mouth shut made my avatar ten times more charismatic than the cliche sideshow that made up the rest of the party, and the opportunity to see a character I liked get some much-deserved stage time did not go unappreciated. Between the steep cost of developing my hometown, the relative challenge of the online quests, and the lure of investing in my own avatar, the multiplayer arrested my attention in a way the storyline could only dream to. My insatiable appetite for more multiplayer goodness gave rise to an interesting dynamic where Leonard and co. were stagehands charged with collecting materials and progressing the storyline until the the real hero—my avatar—could once again return to the stage.

While I definitely favored the online portion, the symbiosis of each mode providing a time-out from the other was critical to my enjoyment of Chronicles and defined my experience. Unfortunately, this arrangement isn't without flaws. Online progress is governed by Guild Rank, which controls everything from access to hometown and equipment upgrades, to which quests my character could participate in. As time wore on, the cost of promotion skyrocketed while the game continued to mete out new quests via IV drip—only two or three for every five hours of story. Essentially, I was stuck repeating the same couple of quests if I ever hoped to move up the later ranks.

Additionally, the more intimately interwoven my on- and offline experiences became, the harder it was to ignore the disconnect between them. Similarly to how my avatar was a non-entity in the storyline, the rest of the story mode's party is nowhere to be seen in the online features. Questing offline without other real players is a solo experience, and Chronicles never even attempts to explain why my silent adventurer would periodically vanish to engage in online expeditions or try his hand at city planning. How does someone even come about having their own personal town? Given the incredible leaps of logic Level-5 goes through to make their offline story happen, it's puzzling that they gave no effort to even a cursory explanation of the online features.

Thankfully, with their powers combined, the sister modes of the game conspire to lift it above its shortcomings and transform it into a worthwhile, if scatterbrained, experience. In my world,  Chronicles as an offline-only experience doesn't even exist. The two modes of the game are so utterly co-dependent that, despite my enthusiasm for it, I would actually recommend against playing this game without an internet connection. I'm tempted to use the old chocolate-in-my-peanut-butter metaphor to summarize White Knight Chronicles, but that doesn't really tell the whole story. It's more like chalk-in-my-gruel, except the result is magically delicious. Rating: 7.0 out of 10.

Disclosures: This game was obtained via retail store and reviewed on the PS3. Approximately 30 hours of play was devoted to single-player modes (completed 1 times) and 25 hours of play in multiplayer modes.

Parents: According to the ESRB, this game contains mild language, use of alcohol and violence. Aside from an errant "damn" here and there, there's not much to be worried about. The violence is typical bloodless video game fare, and WKC isn't overflowing with sloppy drunks or anything.

Deaf & Hard of Hearing: All significant information is presented clearly on screen, and there are no significant audio cues. The game does have headset support, so hard of hearing gamers may have issues with people using voice chat to communicate online.