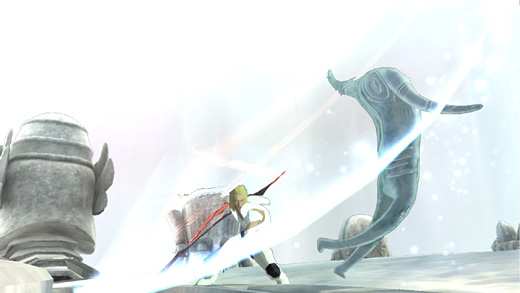 In my early teens I was a devout Southern Baptist. You could find me at church every Sunday morning, evening, and on Wednesday night. Back then I knew with unshakable certainty that I was destined to lead my own congregation someday. Times change though, and I did too. Now 25, I have been comfortably Agnostic for years, but my departure from Christianity hasn't erased the experience of having practiced it. I couldn't deny the influence my time within the church has had on me, and wouldn't; to do so would be to deny a fundamental piece of myself. From this perspective, I can't help but wonder if Western developers are doing themselves, gamers, and culture as a whole a disservice by continually minimizing and ignoring the role of religion in Western society.

To contextualize Western attitudes toward religion in games, it's helpful to cast an eye to the East. Hagane, a Japanese-produced game for the Super NES, opens with a cinematic of the titular robot ninja coming to life. One shot focuses on his internal workings, where figures of the ancient Japanese dieties Fukurokuju and Ebisu sit atop the pistons churning inside of him. In a more modern example, Yakuza 4, released this year, associates each of the four principle characters with the four celestial beasts. While Japan is generally considered to be an agnostic nation, the symbology of the nation's faiths pervade the design of their games. One would need to look much harder to find comparable examples in Western gaming. The casual relationship between video games and spirituality found in Japan is almost entirely absent here on the opposite side of the globe.

I broached this subject on the E3 podcast, and regular commenter Decabo suggested that the reason for this difference is homogeny. Japan is more culturally homogeneous than many Western countries, and therefore it is easier for Japanese developers to play with religious concepts. This explanation might work, if Western game development weren't an incredibly homogeneous environment itself. A demographic study released by the IGDA in 2005 reported that the community was 88.5% white, 83.3% male, and 92% heterosexual. Presented with these figures, the absence of religious content in Western games seems less like cultural sensitivity and more like willful avoidance. 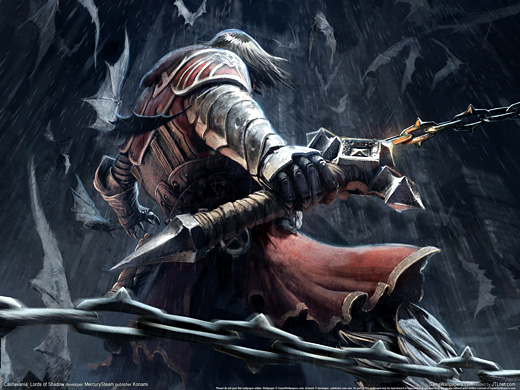 The problem here is that religion is an integral part of a cultural identity. While individuals within a society may not practice the same beliefs, society itself been shaped by the ebb and flow of spiritual tides. As a media form hungry for legitimacy, video games have a duty to demonstrate this undeniable influence.

There are rare occasions where the specter of religion can be seen in mainstream games, but these titles usually view faith with a jaundiced eye. When not presented as a cold tool of mass manipulation, it is assumed to be morally compromised. 2K Marin's BioShock 2 is a good example of the former. The principle antagonist, Sofia Lamb, uses faith as a tool to solidify control over her followers. Notably, Father Wales, the leader of this faith, is the only one of Lamb's lieutenants that the player is required to kill.

The latter attitude can be seen in Bioware's Dragon Age series. In the game world, individuals are born with the capacity for magic, and those who are discovered to possess such abilities are taken by the ubiquitous Chantry to be confined in the Circle of Magi. Mages who refuse to comply are hunted by the Chantry's army of Templars. While players are free to align themselves with the Chantry, it is regularly insinuated in-game that their dogmatic policy of capture-or-kill is outdated and overbearing.

Sniping at organized religion from behind cynical euphemisms falls far short of the considered treatment merited by such enduring human ideas. Religion is more than a system of beliefs separating us from them; each theology contains a wealth of tales, characters, and imagery brimming with cultural and historical significance. These are resources that Western developers could and should be drawing upon.

Games don't need to evangelize. In fact, of the few available examples of Western video games with a positive Judeo-Christian influence, most have been pointedly evangelical, and quite poorly received at that. Wisdom Tree's Spiritual Warfare, an unlicensed NES release distributed via Christian bookstores, is an unabashed Legend of Zelda clone, and is often derided for its low-quality gameplay and heavy-handed portrayal of Christianity. Inspired Media's Left Behind: Eternal Forces, a real-time strategy game released on PC in 2006, has its own problems, having been accused of everything from misogyny and bigotry to espousing a "convert-or-kill" mentality.

Abandoning religiously-influenced video games to be the exclusive domain of orthodox ideologies has the recursive side-effect of defining their role as only such. It also legitimizes the knee-jerk reaction many Western gamers have when the topic of religion in game comes up, namely that no one wants to be preached to while playing video games.

A good example of how to utilize these resources without proselytizing can be found in the UTV Ignition's upcoming El Shaddai: Ascension of the Metatron. Based on the apocryphal Book of Enoch, it possesses a spare, abstract art style that is both dreamily biblical and distinctly game-like. Rather than being buried under the weight of religious myth, El Shaddai is informed by it, and consequently its unique identity flourishes. There's only one problem with El Shaddai: it was developed in Japan. Tellingly and embarrassingly, Eastern developers not only embrace their own spiritual heritage, but are also more adept at handling the religious heritage of the West than well…the West.

Encouraging examples from Western developers do exist. Titles like Visceral's Dante's Inferno, Vigil's Darksiders, and particularly MercurySteam's Castlevania: Lords of Shadow all take steps in the right direction. Each of these games confidently explore religious themes, originate from respected Western development houses and have received some degree of mainstream critical acclaim. All, too, are testosterone-fueled, gory romps that focus exclusively on the familiar conflict between Heaven and Hell. Judeo-Christian myth is home to much more content than that well-trodden struggle, and developers still have a long way to go before fully representing the breadth of those narrative reserves.

In an unlikely future where video games were the only means by which the descendants of humanity could learn about their forebears, video games would teach them that the Western world was 80% white, 85% male and that our only unifying belief was an unremitting paranoia about alien invasion. If the gaming community hopes for video games to reach the holy grail of respect-parity with other media, games must become the the same mirror to society that these other forms have embodied for years.

It’s too big to ignore? But gaming has been successfully ignoring religion for decades. Your argument for religion in gaming seems to simply be that it needs to happen and that other entertainment mediums do it regularly. Neither of those reasons resonate with me at all.

I suspect it’s less to do with cultural homogeny and more to do with the fact that the United States has a high percentage of very active, easily offended believers. Western developers would rather skirt the issue by not referencing religion than draw the ire of a very vocal demographic. It’s my impression that Japan, on the other hand, has a pretty low percentage of Christians and other monotheistic religions; and Buddhism and Shintoism don’t have quite the same hangups. Certainly this seems to have been why religion was such an anemic, flavorless mechanic in Civilization IV – they simply… Read more »

Decabo: A lot of people dislike the banks that were Too Big To Fail. In a similar way, a lot of people might dislike religion, but it is Too Big To Ignore. If people disagree with religion, that’s fine too. I’d love to see a game that forthrightly confronts organized religion as much as I’d like to see more games like El Shaddai. They just need more confidence, and less insinuation. Zolbrod: Thanks for the kind words. Here’s hoping I like El Shaddai better than you did. 😛 Richard: She might, but I uh…accidentally discouraged her from ever joining my… Read more »

You forgot to mention Bayonetta in your article. I think more than any other game in recent memory, that one has religion more at it’s core than anything else, though it accesses it through the idea of deviancy. I could go on, but i think it’s worth a mention. Maybe my atheism makes me more open to it’s Nietzschean protagonist.

There’s one other thing I wanted to touch on: [quote]I broached this subject on the E3 podcast, and regular commenter Decabo suggested that the reason for this difference is homogeny. Japan is more culturally homogeneous than many Western countries, and therefore it is easier for Japanese developers to play with religious concepts. This explanation might work, if Western game development weren’t an incredibly homogeneous environment itself. A demographic study released by the IGDA in 2005 reported that the community was 88.5% white, 83.3% male, and 92% heterosexual. Presented with these figures, the absence of religious content in Western games seems… Read more »

Wouldn’t Leliana represent a portrayal of positive Judeo-Christian themes? Her character hardly comes off as “sniping at organized religion from behind cynical euphemisms”, instead being a positive reflection of her own faith, even if the Chantry itself is portrayed rather negatively.

Leliana is someone who, to use the cliche, practices what she preaches, and her shady past makes her discovery of faith all the more believable.

Having already finished (and disliked) the Japanese version of El Shaddai, I appreciate the fact that it uses Christian themes solely as a setting for a (quite mediocre) action game. El Shaddai features (fallen) Angels and an implied presence of God, but it is in no way about ACTUAL religion. It’s a setting inspired by the bible, no more, no less. It’s basically the same as God of War: it uses a popular mythology as background for its action, but it never questions/glorifies/judges God or belief in Him. And I don’t see what’s wrong with that. Like Decabo, I’m an… Read more »

This is a pretty bold article, and I give you credit for posting it. I also appreciate you mentioning me by name, rather than giving some vague reference. I having a differing opinion, though. [quote]Sniping at organized religion from behind cynical euphemisms falls far short of the considered treatment merited by such enduring human ideas. Religion is more than a system of beliefs separating us from them; each theology contains a wealth of tales, characters, and imagery brimming with cultural and historical significance. These are resources that Western developers could and should be drawing upon. [/quote] I think this is… Read more »