From Blueprint to Bible and Back Again 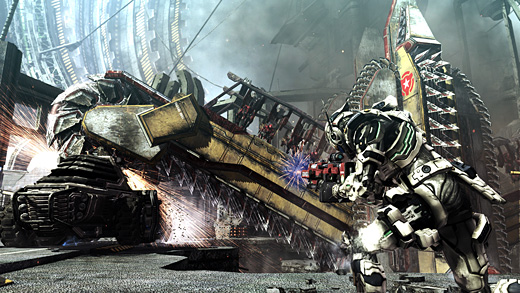 HIGH Every time I backflipped off of a gorgie, slowed time in midair and blew the heads off of three others before touching the ground. This happened often.

LOW Restarting a stage and getting blown away by a starship-class laser before the chapter title had even faded from the screen.

WTF A tie between the dancing gorgies, and the fact that not one of them was doing the robot.

When he directed Resident Evil 4, Shinji Mikami not only redefined his own series, but also third-person shooters themselves. Since that seminal game, nearly every high-profile entry in the genre has treated it as a blueprint. At the very least, they borrow its over-the-shoulder camera, and often owe it a much greater debt besides.

However, evolution is a constant process and time and technology has put significant distance between Resident Evil 4 and the third-person shooters of today. Now they have settled into a more cover-centric identity, where opposing forces trade shots at each other from behind the safety of indestructible, chest-high walls. The genre may have departed from the framework Mikami laid out back in 2005, but his latest project, Vanquish

, shows that he can keep raising the bar for as long as other developers are willing to reach for it.

Despite an increased emphasis on mobility, Vanquish is still a cover-shooter at its core. What sets the game apart from its genre cousins is in unique handling of those ubiquitous chest-high walls. For Vanquish these concrete havens are, in a word, transient. Cover works well enough as a temporary respite from battle, but those who are accustomed to treating it like home base will have those views swiftly corrected. Giant robotic menaces will not hesitate to smash into it, blow it to smithereens, or even fire directly through it, frying the protagonist a crispy golden-brown. The 'bots that lack these powers will instead swarm Sam's hiding place and vault over to punish him for his wimpiness. In the game's final act, cover becomes even less reliable, dropping in and out of existence at random intervals, frequently leaving the player standing dumbly out in the open.

Vanquish has transformed cover into a resource, both valuable and limited. Rather than being a source of frustration, the impermanence of cover acts as an invitation for players to explore their arsenal, which includes the considerable abilities of the ARS suit. 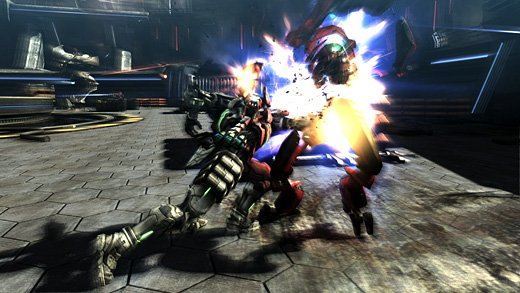 In Vanquish, no enemy is more fearsome than Sam himself. Gorgie footsoldiers can have their heads popped off like so many soda can lids, hulking Romanovs can be pummeled into submission with a volley of close range shotgun blasts, and heavily-armored tanks are defanged once their turrets are destroyed. Even the final bosses of the game are vulnerable to the mighty EMP grenade, which renders all mechanical foes temporarily paralyzed. In disallowing cowardice, Vanquish encourages players to take the offensive. At the same time, it empowers them with the tools to do so, and rewards them with victory each time that charge is embraced.

While Vanquish is comfortably at the top of its class, I didn't find it to be quite as flawless as Brad did. Weapon upgrades turned out to be pretty damn intrusive once I fully understood how they worked. The primary way way to enhance equipment is to pick up duplicates of weapons Sam already has on-hand and said weapons must also have full ammo. Most weapons can be used regularly and still be fully upgraded by the time the credits roll, but there's no way of knowing this without having beaten the game. On my first playthrough there was a strong temptation to keep—but not use—my favored weapons to ensure they would reach their maximum potential, which lead to some moments of frustration.

I also have to disagree with Brad on the quality of the story. What he saw as a perfect mix came off to me as an overcrowded mess.

Vanquish reanimates the specter of the Cold War in an effort to say something about the current economic climate, but fails to use that juxtaposition to make a statement of any value. Just because a character uses the words "Economic Stimulus Package" as the all-American hero attempts to take down Big Red means nothing, other than perhaps the writers were trying too hard.

The story's attempts at satire fare better but are still hit-and-miss; effective scenes like the death of a certain principal character are undercut by the constant upskirt shots of the mission coordinator. The game even tries to get philosophical, frequently referencing Leibnizian Optimism, but by the credits I wasn't sure if it was an indictment or endorsement. Suffice it to say much longer games have utterly failed to do justice to such an array of ideas and at such a short length, Vanquish never really had a chance.

With all that said, the incredibly insightful unification of ARS abilities under a single meter, the impeccable pacing, and the unforgettable setpieces are truly worthy of Brad's lavish praise. It's because of these massive strengths—and my respect for Shinji Mikami as one of gaming's most talented auteurs—that the comparably minor shortcomings stand out in in such great relief.

It's too early to say if Vanquish

will have the transformative effect that Resident Evil 4 had, but the potential is obviously there. If the cover-shooter remains unchanged, it will be due only to the obstinance of willfully inert developers. Creators would do well to take notes, however. The most important lesson Vanquish has to teach—in the context of its own gameplay as well as beyond it—is that blithely lingering in ones comfort zone is the surest path to destruction. Rating: 9.0 out of 10.

Disclosures:  This game was obtained via retail purchase and reviewed on the PS3. Approximately 14 hours of play were devoted to the single-player mode, and the game was completed twice. There are no multiplayer modes.

Although the game isn’t perfect, I don’t have any complaints but one, and that’s that we don’t get to play on the Red side, which I’m actually far more fond of as an army and nation to aid. Because of this, I didn’t feel very motivated to win, as much as to just figh for my own enjoyment.

then as your attorney I strongly advise taking a day off to watch North by northwest and then play RE4.

I agree on the point of pacing, which is why I mentioned in the review that the length of Vanquish itself wasn’t conducive to fully justifying the ideological burden it was carrying. I wouldn’t want Vanquish to be any more talky (I think it’s a little too talky as is), rather I would have preferred it to settle on a single narrative goal and stick to making that one work. And I’ll take your urgings to expand on my thoughts as a compliment, but I don’t think I’ll be doing that any time soon. I’m not confident enough in my… Read more »

whatever is such a bad word, and I came off like I didn’t care about what you said, and I didn’t mean to do that. I felt that if they’d added any more detail in the way of fleshing out the characters or situations, it would have slowed the game down from being a headlong rush, and I think they didn’t want to do that. I get that from the game. Let the environment and action speak for itself, and keep it hot. I think you could definitely expand your observations about Mikami’s craft into a larger post, maybe compare… Read more »

My disappointment with the story rests solely on the back of Mikami. Were it any other developer, I too would’ve cared less. In a development environment where the only “artistic” directors are people like Kojima, Suda 51, or Johnathan Blow who smash you in the face with the “art” of their game, Mikami occupies a unique space as someone who actually utilizes subtlety, to the point that I think most gamers don’t even think of him as an “artistic” director at all. Resident Evil 4 is my go to example for this. While it, like Vanquish, is a gonzo parody… Read more »

Vanquish is a hot contender for my personal game of the year. The only thing I’m a bit sad about is the ham handedness with which the story was told. Some story elements I don’t want to spoil here delivered quite big “wtf?”-moments. But its just so much fun to play that I completely ignored the b-movie storyline after some point. I didn’t find the weapon upgrade system intrusive, since I never felt that my weapons would have lacked punch. Therefore I actually didn’t think much about it and still had my main weapons machine gun, assault rifle, sniper rifle… Read more »

I could care less about Vanquish’s story, which is good because the developers seemed to sense that reaction. The only weak thing for me is the McGruff the crimedog voice for the big Sergeant. When the character’s mouth is yelling, the actor makes his voice deeper- it doesnt click. But, story:you can’t fault a pseudo Cold War evil soviet superbadguy story for not being realistic or creating compelling characters can you? I just viewed it as a nod to Reagan era American action films and moved on. With regard to weapon upgrade, I think it’s a useless feature put in… Read more »