Cry havoc, and let fly the pigs of war 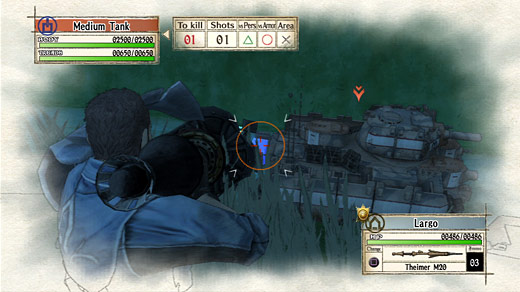 HIGH Capturing the enemy flag with a single scout running and gunning within the first turn.

LOW Leaving my own base totally unguarded allowing a lone enemy Lancer to lumber over and capture it unhindered, 10 turns into a battle.

WTF We definitely needed a cutesy flying piglet in our reimagining of WWII, right guys?

It seems like lately gaming has entered it's own Cold War. E3 was a stark reminder that developers seem intent on escalating their respective hype machines, which each year generate more shock and awe than the last. Those games who don't have the undeniable power of hype pushing them forward can rarely hope to attain the reviews, sales and reception of their more fortunate counterparts. Ironic, then, that Valkyria Chronicles, a game about a different war in which a tiny nation fends off an empire, is the one to turn this convention on its head.

Originally released in the fall of '08 to modest success, Valkyria Chronicles has maintained a steady momentum thanks almost entirely to word of mouth, prompting Sega themselves to recognize fans of the game for fighting the good fight. But what about this game drives people to take up the cause this way?

The game has style in spades. CANVAS, the clever name Sega uses to describe the visuals used in Valkyria Chronicles, makes the entire game look like it was hand drawn on parchment, and every part of the game is consistent with this style. The between battle menus are handled in the form of pages in a book about the war, and when selecting units in battle, the camera will zoom high above the action displaying the entire battlefield as if it were a topographical map.

Fortunately, there is more than enough substance to match, and Sega has a word for that too: BLiTZ. Unlike your typical tactical RPG, Valkyria Chronicles isn't entirely turn based. The militia and empire forces do take turns moving units, but both can also attack any enemy units which move into their field of view during the opponents turn. What this means is that the player can't just run into a base and capture a flag in one turn as they'll get torn to shreds by enemy gunfire. This system combined with a variety of units, a tank or two, and quite a spread of upgrades to make to the troops easily sees the game through its 30-hour length. 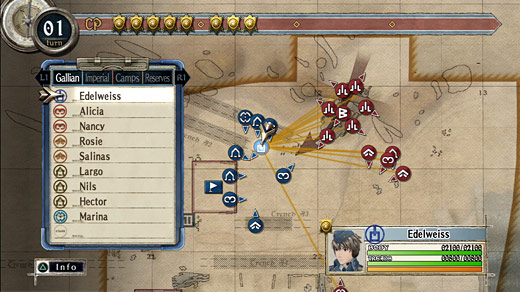 If that weren't enough, the troops themselves have enough charm to choke a horse. There are plenty of recruits in Squad 7, and each one has their own name, backstory, friendships and unique skills and weaknesses that set them apart from all other units of the same class. I found myself falling back on a crotchety old shocktrooper with a bad back named Coby for much of the game. There's a feeling that comes from seeing this bald 50-something take out an enemy APC all by himself that just can't be replicated by Unit #342 fresh off of the production lines. On the flipside, there were characters like the dopey, scatterbrained Ramsey that I loathed using, and would only deploy in moments of dire necessity. Between Coby and Ramsey existed a spectrum of faces and personalities with which I had wildly varying degrees of love/hate for, and the affinities I built with the various members of Squad 7 through the game only served to enrich the entire experience.

However, like the individual units that make up Squad 7, Valkyria Chronicles has a few flaws of its own. The story, while basically a retelling of WWII, has several heaping helpings of irritating anime conventions common in RPGs. Despite the horrors of war going on around them, characters frequently find time to be sickeningly twee, coming up with cute strategies based on bugs, rambling about delicious baked goods and "aw!"-ing at winged piglets. Furthermore, the squad as a whole has probably one of the most unconsciously hypocritical moralities I've seen since God of War.

Without spoiling much, our intrepid heroes are assisted by a super-powered being in an extremely critical battle. It is obvious both to the player and to the in-game characters that this battle would not have been winnable without such extreme assistance, and the game emphasizes this fact. Immediately afterward, the characters then agree that the use of this power was a "very bad thing" for no real reason, and vow to never use it again. The power is used again, however, and its use inarguably sets the groundwork for yet another victory. In essence, the game has its moral cake and eats it too, using "very bad" power when it is necessary to move the story forward, meanwhile constantly reminding the player that the power is indeed "very bad."

Another point of contention is that despite the general robustness of the BLiTZ system, the game periodically thrusts the player into gimmick missions which are rarely as fun as a straight battle. In one, the player is faced against an opponent on a high wall who wields a machine gun with the power and accuracy of a sniper rifle, that can and will annihilate a unit before they've moved five steps from cover. In another the squad is faced against a tank that is as big as a building, and many turns are spent simply waiting for it to expose its radiators, which are the only weak spot it has.

These battles and the anime contrivances in the storyline stand out starkly as small but significant blemishes on an otherwise fantastic game. Even with these, Valkyria Chronicles, with its refreshing take on the tactical RPG genre, its creative angle on a war that's been done-to-death in the games industry, and its beautiful presentation is an easy game to recommend (again and again, more than half a year out from release) to almost any gamer. Rating: 8.5 out of 10.

Disclosures: This game was obtained via purchase and reviewed on the PS3. Approximately 30 hours of play were devoted to the single-player mode, and the game was completed one time.

Parents: According to the ESRB, this game contains animated blood, mild language, mild suggestive themes, use of tobacco, violence. While this list is mostly accurate, I do remember the game being largely blood free, with gunfire causing little more than sparks of impact, and the most suggestive theme I can recall is one enemy officer's particularly ample bosom. Even an issue as serious as concentration camps are handled with kid gloves firmly on hand. I would say there is little to nothing for parents to worry about here.

Deaf & Hard of Hearing: All voiced dialogue is presented through subtitles, with the exception of small quips during battle, which aren't significant to gameplay. There are also no serious audio cues to speak of.