Everything Old is… Still Old 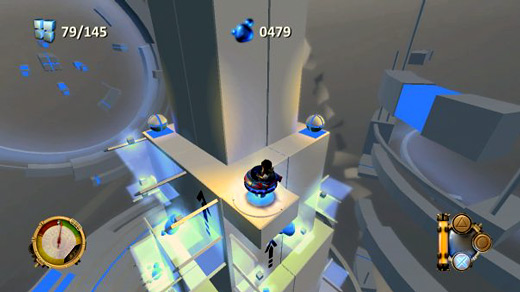 HIGH Blasting through the last stages with the upgraded push ability.

LOW Labyrinth taught us that rolling balls into holes with real life physics is never, ever fun so why is it still in so many games?

WTF The hero is struck mute after the opening cinematic.

Region-specific releases on the PlayStation Network (PSN) always generate a kind of passive curiosity for me, at least when that specific region isn't North America. Like a window shopper, I log into my fancypants overseas PSN accounts (easy to set up) and read over the names and descriptions, but never actually feel bothered enough to jump through the necessary hoops to actually purchase any of them. Topatoi: The Great Tree Story was one of the more interesting examples of this phenomenon until it covertly crossed the pond well after I had stopped holding a torch for it. One five dollar discount later, and passive curiosity gave way to active download.

Of all the genre mutations I've seen fall by the wayside over the course of my gaming career, the PS1 platformer is one I never expected to see revisited. Seeing actual three-dimensional characters scramble about collecting fruits and crystals and anything else that wasn't nailed down was nifty when it first made the scene, but it isn't a concept that has aged well. These games were often limited to small rooms and narrow pathways due to hardware restraints, and frequently did little more than marry the cheap deaths of 2D gaming with the now-horrendous and angular graphics of early 3D. Once the PS2 arrived on the scene, the technical limitations vanished and PS1-era platforming died an unceremonious death.

Fast forward to Topatoi, and it's 1996 all over again, except someone just discovered how to implement in-game physics! The idea is a familiar one to anyone who owned the original PlayStation: navigate linear pathways while collecting assorted Somethings while progressing to the goal. The twist here is that the protagonist pilots a neat little hover machine that has the ability to push and pull items around the stage. It's a concept that has some potential, but Boolat Games's hovercraft never really makes it off the ground.

The way the physics are utilized here deserves some praise. Progression is usually reliant on pushing or holding switches to open doors and move platforms, and it seems Boolat was smart enough to realize that any physics engine is finicky by nature; each scenario in which physics plays a role thankfully includes enough wiggle room to preempt frustration. The push and pull of the hovercraft is pretty powerful, so I rarely had to worry about a ball getting away from me while making quick turns. When it did happen, losing an object off of a cliff never required much more than a couple jumps back to get another. It's a very restrained experience, and in a game that makes physics its central mechanic, restraint is a good thing.

It's unfortunate that this restraint bleeds over into the way the episode is structured. Each of the game's seven stages introduces a new mechanic, which isn't unheard of, but these concepts just aren't enough to sustain full stages. We're talking really basic stuff; one level teaches the player to use a double jump, another focuses on the ability of the hover to push objects. The result is that the first episode is essentially a tutorial for a game that doesn't even exist yet. I understand the concept of episodic delivery, but for it to work each episode should feel at least somewhat like a complete experience, and that's just not the case here. It isn't until the final stage that Topatoi blossoms into what could be a decent little platformer, but instead of being a nice start, it was an unfulfilling end.

Topatoi: The Great Tree Story delays its payoff for too long, and in the end exists mostly as a suggestion of a game that might be good to play when (and if) it makes its way to the PSN store. Add the fact that the characters of Topatoi lack any of the charm or personality of your typical platformer cast—their in game models look a little revolting even—and it's a hard game to recommend. Those jonesing for a return to the days of the PS1 (all three of you!) can easily turn to the PS1 classics already available on the PlayStation Network for comparable prices, and there's no need to wait for later episodes to get to the good stuff. Rating: 4.5 out of 10.

Disclosures: This game was obtained via paid download and reviewed on the PS3. Approximately 4 hours of play was devoted to single-player modes (completed 1 time).

Parents: According to the ESRB, this game contains comic mischief. There's nothing to be concerned with here. Enemies are defeated by pushing them off the edges of the stage, at which point they disappear in an orange poof.

Deaf & Hard of Hearing: Audio cues are used to denote that an object has appeared, usually upon pressing a switch. While it's possible to simply search around after activating a switch to see what effect it had, it should be noted that these sometimes take place off-screen, necessitating a bit of searching.