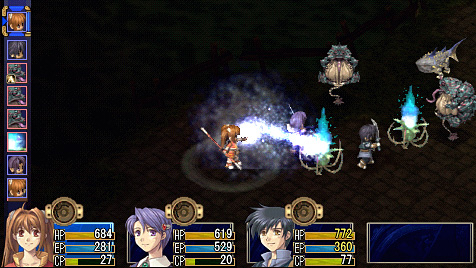 HIGH Configuring my Orbment to get access to a powerful area-effect spell in the first chapter of the game.

LOW At least half of the game's playtime is spent with only two party members of a potential four.

WTF The budding relationship between Estelle and her adopted brother Joshua is weird enough, but was it necessary for nearly every NPC to peer-pressure them into it?

One thing I enjoy about a new role-playing game (RPG) is being introduced to a new world. RPG settings are themselves characters as important as any party member, and their development continues long after the heroes have been fully fleshed out. The Legend of Heroes: Trails in the Sky

is no exception to this trend. The world is emphasized to such a degree that it could be argued that the game's nation of Liberl is itself the star of the adventure. Considering this emphasis on setting, it's a shame that Liberl is so boring.

Trails in the Sky centers on the travels of Estelle and Joshua, ambitious new members of The Bracer Guild—a friendly neighborhood mercenary outfit—who are tripping across Liberl in an effort to reach the organization's senior ranks. With the game's primary conflict almost invisible for the lion's share of the game, the primary focus of Trails in the Sky is on this Liberlian grand tour.

Falcom desperately wants players to believe that Liberl is a wonderful place full of beauty and history. When arriving in each new region, party members will fawn over extraordinary new landmarks such as a drawbridge or an escalator, as if encouraging me to join in their excitement. Unfortunately, I've played so many RPGs that if I didn't see another character gasp at the sight of an airship it would be too soon. It doesn't help matters that aside from some central buildings—in one case a communal market, in another a high-tech factory—the regions of Liberl feel identical. The same cobblestone houses populate small-town Rolent and the industrial center of Zeiss. It's not enough for the game to tell me these places are culturally diverse; I need to see it.

Although Falcom didn't succeed in creating a unique setting, there was one aspect of world-building that I appreciated. In Trails in the Sky almost every NPC, no matter how unimportant, has a name and established relationships. If one looked hard enough, it is possible to recognize minor characters from the early game putting in appearances much later on. What made this more impressive is that if the party had interacted with these individuals, they would remember. I'd often take on a new assignment from the Bracer Guild, and be surprised the client recognized me from a chat on the street. It's a small touch that imparts a genuine feel of consistency. Considering how seriously RPGs take their settings, I'm surprised—pleasantly—that Trails in the Sky was the first I've played to make this effort. 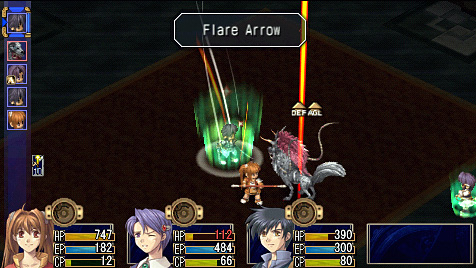 Apart from Liberl itself, Trails in the Sky still has plenty of attention to give to its human characters. However, it's unfortunate that even cloaked in clever writing, these characters are naked cliches. The spunky tomboy, the badass with a heart of gold, and—spoiler!—the princess in disguise are all accounted for, and most of the supporting cast (with one exception) isn't any better.

A strong story could have gone a long way toward covering for these deficiencies, and the tale in Trails in the Sky seemed promising enough early on. The problem is that the game continuously delays the payoff until its final chapter. For example, in any encounter where a mysterious foe might impart some narrative illumination, the boss unfailingly escapes. The inevitable egression of these bosses became so routine that I felt no more excited for critical battles than I did for random fights. The final chapter denouement is satisfying even considering the cliffhanger ending, but there is no reason all of this narrative momentum had to be reserved for the last few hours.

As indulgent as Trails in the Sky is regarding its world and characters, it is unexpectedly conscientious with its battle and skill development systems. Trails in the Sky strikes an excellent balance between combat and conversation, and yet Falcom still gave players almost full discretion on how much fighting will take place. In an increasingly popular (and welcome) RPG trend, every encounter is visible on the field and thus can be avoided, and once joined nearly every fight can be fled immediately. Being bogged down with endless encounters never happened in this game because I could literally pick my battles. In a bizarre reversal for RPGs, I found myself hunting the next encounter, instead of dreading it.

When combat does take place it's standard RPG fare, but with just a whisper of strategy to keep it fresh. Characters are free to move about the field, and many attacks have an area of effect. The difficulty is far from that of a proper strategy game; grinding out levels and snoozing on the X button can work, but it's much more fun to utilize movement and positioning to prevail. Trails in the Sky hits a finely-tuned sweet spot where basic tactical thinking yields obvious benefits, but new obstacles never feel overwhelming or tiresome.

The skill customization system has a similarly perfect level of depth. Each character has a unique orbment (a skill layout) and combining quartz in different ratios on these orbments decides what skills can be accessed. It's not necessary to spend 30 minutes calibrating quartz every time a new party member arrives, but it's certainly entertaining. The modest difficulty of Trails in the Sky is once again a boon; well-constructed setups had its incentives, but I never felt railroaded into using specific quartz or skills.

As the first entry in a planned trilogy, The Legend of Heroes: Trails in the Sky

has technically done its job. The game has built my anticipation for the next installment, in spite of itself. Granting that, I'm not interested in a rerun. A clever battle system can distract for only so long, and the value of semi-persistent society is limited by the appeal of the world in which it exists. I'm sure that it's hard for creators to not fall in love with the product of their labor, but navel-gazing is only entertaining for the owner of said navel. For the sequel to succeed, Falcom must deliver the narrative meat that was mostly hinted at in this introductory installment. Rating: 6.0 out of 10.


Disclosures: This game was obtained via publisher and reviewed on the PSP. Approximately 46 hours of play was devoted to single-player mode (completed 1 time).

Parents: According to the ESRB, this game contains animated blood, drug reference, fantasy violence, language, suggestive themes, use of alcohol and is rated T for Teen. It might look like a lot, but all of these are present in very small quantities. The most common of these is probably the suggestive themes, but most of the double entendre will likely fly right over the heads of younger players.

Deaf & Hard of Hearing: There are no significant auditory cues, and the only spoken dialog exists in the form of short battle cries ("Let's go!") during combat, and even those are often subtitled.

So I’ve never played this game and read this review to see if I wanted to pick it up. Since I’ve never played it, I would appreciate it if you wouldn’t flippantly include spoilers for no reason. Even if it is the case that the princess in disguise is a cliche, I’d still rather find out that important plot reveal from the game than some review. Also, saying “SPOILER”! in the same sentence of the actual spoiler does not deter you from reading the sentence as I the spoiler literally immediately followed your warning. I hate it when review sites… Read more »