Strong Enough for a Man, Made for a Woman 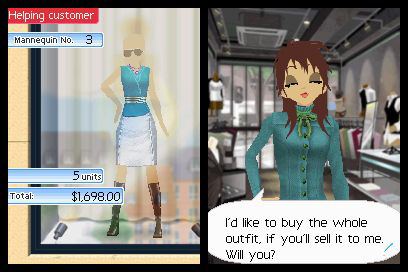 HIGH Witnessing customer after customer go gaga over my ensembles.

LOW Realizing that their taste was dictated almost exclusively by brand.

WTF There are two men in the whole game: One is the store owner/love interest, the other is his butler.

When browsing through DS games in any brick-and-mortar store, I often find myself lost in a fog of so-called "girl games." These titles encompass stereotypical girl interests: babies, weddings, and yes, fashion. While someone is obviously buying these games—a lot of them, given their ubiquity—they are almost entirely disregarded by the enthusiast community as shovelware. Anyone reckless enough to actually try one of these games would be flying blind; there's almost no critical feedback on which to base an informed decision.

When I bought my DS, I felt a bit of that recklessness. Since there's such a dearth of criticism for these games, I decided to base my purchase on which game had the most compelling cover art. That's where Style Savvy

comes in. I admit, the words "published by Nintendo" make for some pretty compelling cover art. Given my absolute lack of knowledge of the game itself as well as the entire subgenre of titles to which it belongs, Style Savvy turned out to be equal parts pleasant surprise and sorry disappointment.

The first surprise hit me as soon as I turned the game on for the first time. The production values in Style Savvy are impressive. The opening video showcases a bright, airy aesthetic set to digital DS pop tunes. This pitch-perfect aesthetic permeates the entire game, from the menus to the sales floor. Far from being a hack job, Style Savvy had some real talent behind it.

This level of care was apparent in the core gameplay as well. The bulk of the game revolves around manning a register and accommodating customer requests. Each patron is unique, with different preferences for styles, brands, colors, and so on. Their requests are equally varied, with some girls looking for the perfect anytime top while others seek an ensemble built from the ground up. Small tells like what a girl wore into the store or their hobbies and professions can be helpful in figuring out just the right piece for the occasion. Learning to read these signs and pair them with individual tastes to make the perfect sale produced a real sense of accomplishment.

It's not as simple as being able to understand clientele. The layout of the sales floor, the mannequins on display, and seasonal trends—which can followed via the in-game style magazine, Nuances—all effect what kind of demand will hit the store. However, the storeroom is limited, so predictive choices about what to carry are a necessity. The tension of limited inventory vs. diverse demand was one I enjoyed, and it kept me micromanaging my inventory in pursuit of the perfect balance. 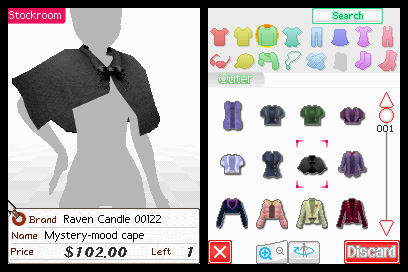 Eventually all of these fun little touches are eroded away by a single, easily exploited fact. In my experience, the most important factor in a customer's purchasing decision is brand. Don't have the sweater they requested, or even any sweaters at all? Toss a pair of boots from their favorite designer across the counter, and watch another happy customer readily lay down some cash. While there's some realism to this—everyone has fallen under the spell of an impulse purchase—it's too consistent, and therefore easy to abuse. As I familiarized myself with each girl's brand preferences, actual requests became irrelevant. I would push items I knew they would buy, and send them out of the door looking like uncoordinated clowns.

These easily manipulated purchasing habits—in tandem with the fact that every client had the same body, mannerisms, and shared lines of dialog—engendered a sense of catering not to individuals, but to a legion of fashion obsessed androids. If Style Savvy were intentionally trying to make a clever statement, this would be golden. The game isn't that clever, though, so the only result was my waning interest in dealing with customers.

It's for this reason that creating whole outfits became my favorite activity in the game. While the same principle of preferred brands still applied, it was rare to have a complete outfit—with accessories—from a single label, so some creativity necessarily came into play. Even better were the occasional fashion contests, where the goal was not to sell, but to create the most impressive ensemble. It wasn't that these were particularly challenging; competing designers would make laughable mistakes like throwing a pair of gothic-lolita clodhoppers on a model for an activewear competition. It was that they offered a greater level of player agency than the matching game the store had devolved into.

Equally entertaining was dressing up my own avatar. All clothes purchased for the store were also sent to my personal collection. Aside from having the world's biggest wardrobe, there were also makeup and hair stylists to patronize, and I did so with abandon. There was never much incentive to do these things, but being able to customize avatars in detail has always been fun for its own sake, and Style Savvy is no exception.

Aside from these frivolous personal items for myself and stock for the store, there is nothing else to spend money on in the game. It seems as though syn Sophia took the term "management sim" a bit too literally. Store expansions, remodeling, and even new ambient music all came as rewards for meeting certain sales goals. I was a manager rather than an owner, and all important decisions took place over my head.

The actual owner was Dominic, a rich, handsome charmer and one of only two men in the entire game. This struck my as overtly misogynist. In a world where every inhabitant is female—my avatar, the customers, stylists, reporters, and so on—it seems like syn Sophia was making a pretty pointed statement by casting the owner and primary decision maker as male. What's worse is that Dominic is also positioned as the player's love interest, which added another layer of ick to the proceedings. Considering how neglected female gamers have been, it's unfortunate that a well produced game like Style Savvy is trafficking in a bit of Gender Enforcement 101.

As it is, Style Savvy

seems like a dry run at a great sim. A later installment—where initial depth isn't undermined by a brand-zombie customer base, where I actually own my own store completely, and where I'm not reminded that no matter how successful my avatar becomes there will still be a man lording over her—would be a home run. The blueprint is set, all that's left now is to hope syn Sophia can fashion something truly special from it. Rating: 5.0 out of 10.

Disclosures: This game was obtained via retail store and reviewed on the Nintendo DS. Approximately 15 hours of play was devoted to single-player modes (completed 1 time) and no time was spent in multiplayer modes.

Parents: According to the ESRB, this game contains no descriptors and is rated E for Everyone. This is perhaps the first game I have ever played that actual has no descriptors whatsoever, and that's pretty accurate. With that said, the game's handling of gender might be something to at least be mindful of, if you're picking this one up for a young girl.

Deaf & Hard of Hearing: There are no significant auditory cues or dialogue. All important information is represented visually.