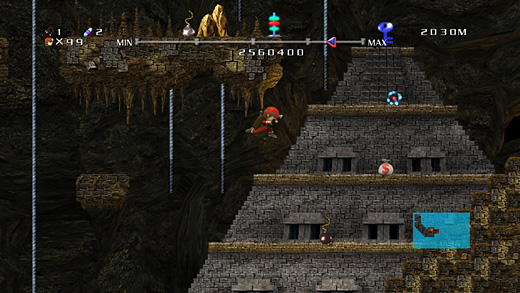 HIGH Completing all ten stages of a new area on the first attempt.

WTF How is the spelunker supposed to get back to the surface?

The only things I knew about Spelunker HD before downloading it were its reputation for merciless difficulty and its status in Japan as a cultural phenomenon. The curiosity sparked by those factors along with the ten dollar price point made it an easy impulse buy. Now, after having spent upward of 30 hours with this unassuming platformer, I'm left with one unanswered question: Why isn't this game a cultural phenomenon here?

Spelunker HD is the most finely tuned and compulsively enjoyable game I've played this year, and easily among the best I've played since first picking up a controller.

It's not that the game introduces wild innovations or heart-rending narrative into the medium of video games. In fact, the fundamental mechanics are identical to the dusty old NES incarnation, as is the premise. A remarkably tender treasure hunter enters a perilous cavern in search of undiscovered riches, where he spends less time finding said riches and more being killed by ghosts, snakes, boulders, steam and, above all things, his own ineptitude.

The rudest awakening of Spelunker HD arrives in the form of the inevitable first death of the game. The titular adventurer takes a step off of the edge of his elevator, mere inches off of the ground, and immediately dies. The second rudest awaking arrives when he falls through seemingly sturdy ground into a shallow pit and dies. The third might be when he blows himself up with his own bomb, or is reduced to white ash by a descending flare, or is defeated by raining bat guano. Eventually the repeated echoes of the death jingle begin to elicit the same psychological response as the sound of a cracking whip.

There have been plenty of difficult platformers, and the list keeps growing as indie developers compete to make the hardest one yet, but Spelunker HD stands apart in the way it presents its challenges. The game never asked me to nail an unbelievable series of jumps or memorize an elaborate enemy attack pattern. My most tenacious adversary was the humble steam vent, and the same modest chasms killed me from the first stages to the last. The obstacles placed before the spelunker are nothing if not surmountable; the challenge lies where the density of these obstacles intersects with the single-minded vigilance required to consistently negotiate them. 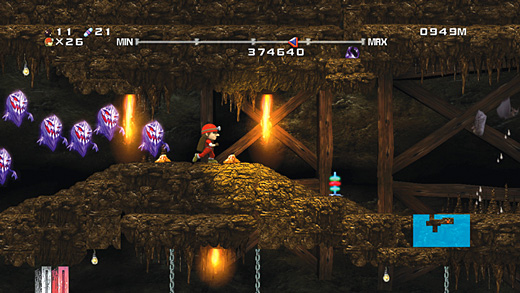 The immutable laws of Spelunker HD are apparent after the first few pathetic level 1 game overs, and from there to floor 100 it's all down to execution. The parameters are set with such crystalline definition that the distance between my current performance and my full potential was always clearly visible. A particularly disappointing session only inspired me to try harder, and even my successes felt like clumsy estimations of what I might ultimately be capable of.

This fastidious adherence to its own rules is paired with a welcome dose of player-friendly wisdom. As strict as the game may be, it veers broadly around the pitfall of spitefulness. The denizens of the caves can all be evaded with some careful footwork; snakes can be leapt over, and bats periodically pause their bombardment to allow safe passage. Even so, bombs and flares—which can be used to drive these creatures into hiding—can be found before their every occurrence without exception. Spelunker HD takes no joy in needless frustration.

The exquisite gameplay is reason enough for overflowing praise, but it is only one virtue among many. Considering the game's elegant simplicity, I was surprised at how many discoveries there were to be made in those subterranean depths. I'm loathe to spoil them in this review, but suffice it to say that the fauna of the caverns come in far more threatening varieties than the incontinent bats that populate the early levels.

Spelunker HD would be a no-brainer recommendation based on the single-player alone, but the multiplayer modes are just as excellent. In cooperative play a group of up to six explorers tackle the caves together. Lives are shared, so there's a vested interest in working as a team. Losing all lives doesn't equal game over either; players can revive one another by walking over the deceased. in one particularly intense run, I and five others successfully—and literally—dragged our collective corpses through the last few levels of the zone. The competitive mode suffers from a lack of players, but when opponents can be found it's surprising how much nuanced strategy can be developed from the spelunker's limited toolset.

The closest thing to a complaint I can muster up for Spelunker HD is that it has a sparse online community, but that's almost like criticizing a masterful painting because it hasn't been seen by enough people. Privately, I tell people that there is nothing wrong with this game. I know better than to make such hyperbolic assertions in a serious review, so instead I'll just say that I'm sure there are some problems in here somewhere, but I'll be damned if I can find them. Irem has wrapped a tight focus with superb execution, and the result is—barring some December miracle—my hands down pick for game of the year. Rating: 10 out of 10.


p>Disclosures: This game was obtained via retail download and reviewed on the PS3. Approximately 30 hours of play was devoted, approximately evenly, to single and multiplayer modes.

Parents: According to the ESRB, this game contains comic mischief. There's no objectionable content to be found in this game, though it might be a touch difficult for the younger set.

Deaf & Hard of Hearing: There are no significant auditory cues excepting the song that accompanies an appearance of the dark spelunker—a malicious rival who periodically harries the player—but these appearances are rare and do not reoccur.

Great review Trent which is why i decided to take the plunge and buy the game. It’s so unforgiving.

I started playing it without playing the Tutorial first. I thought that the game was broken. I died when i fell from a height of 1 inch!

Then i played the Tutorial and started following the rules of the game. It’s gooood but brutal.

Still in Area 1 and the controller’s safety is in some danger..But i am going to persevere for the time being and see how it goes.