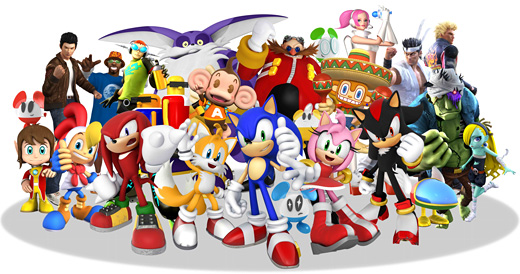 LOW The rage-inducing mission 41, thankfully the only one of its kind.

If it walks like a duck and quacks like a duck, it must be a duck, right? If there is one thing I've learned about axioms like these, it's that they're pretty much wrong as often as they are right. Sonic & Sega All-Stars Racing walks and quacks just like a kart racer (yes, they quack), but turns out to be the love child of Sega's own OutRun and F-Zero GX in a pretty convincing duck outfit.

Sumo Digital's previous title, the excellent Sega Superstars Tennis, saw some of Sega's biggest icons (and a few nobodies) going head-to-head on the court. All-Stars Racing carries some definite stylistic echoes from that title, to the point that I found myself referring it as a sequel. This is a plus; Sumo's most impressive achievement in Superstars Tennis was how they managed to take characters and locales from such disparate genres and have them coalesce under a unified, attractive art direction. By miracle or black magic, seeing Ulala from the rhythm series Space Channel 5 hover alongside deposed Sega mascot Alex Kidd in a track right out Jet Set Radio Future feels perfectly natural. Even more realistic characters—Ryo of the ill-fated Shenmue series, for example—behave with enough exaggeration to fit right in.

Throwing these characters together on the track and calling it a day would have probably been good enough for plenty of nostalgic gamers. There's a certain unique appeal to seeing a gaggle of gaming icons jammed together under the banner of a single title, and time and again this draw has proven lucrative absent any significant innovations. Sumo Digital thankfully vaults over this low bar, imparting All-Stars Racing with solid racing mechanics that easily shine without any help from Sonic and his cohorts.

The cornerstone of these mechanics is the concept of drift. Drifting, as it pertains to motorsports, is defined by Wikipedia as "a driving technique…where the driver intentionally oversteers, causing loss of traction in the rear wheels through turns, while maintaining vehicle control and a high exit speed." It might sound complicated (and probably is) but in the context of the game it just means pressing the drift button while going around a turn. It's as simple as it is crucial; negotiating the chicanery of the tracks is nigh impossible without liberal use of drift. 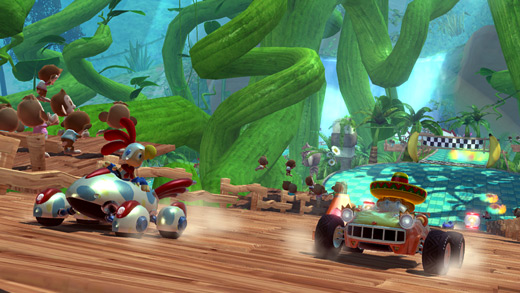 While All-Stars Racing requires a certain mastery of drifting, it also rewards effective drifts with temporary bursts of speed. The longer the drift, the higher the charge. Naturally, boosting around the track is the best way to win races, so this dynamic is constantly goading players to evaluate their surroundings for more and better drift opportunities. After playing for a while, I found myself spending more and more time sliding sideways down straightaways or boosting through obstacles (or both at once!) until each race was a cacophony of squealing tires and ignited boosts, ending with the Bonanza Bros.—my racers of choice—howling across the finish line with a 20 second lead on the second place contender.

These dramatic victories were intensified by the surprising aural and visual flourishes on display. Instead of the humble puttering normally associated with kart races, the cars here growl off of their starting positions and screech around the track, each boost firing off with the force of a sonic boom (pun entirely intended). On default settings the sound effects are much louder than anything else, and I can't imagine that as anything other than intentional.

For each of these auditory crescendos, there are impressive visuals to match. On one course I found myself zooming atop an oversized craps table in one of the game's casino themed stages, glittering lights decorating every inch of the track. On another, a highly stylized Latin pueblo gave way to a stretch of psychedelic meltdown, where the giant disembodied head of Samba de Amigo's titular character could be seen spinning and grinning above the jockeying racers. The characters themselves are party to this exaggerated style, animatedly taunting one another as they fight for position, their cars trailed by colorful streaks as they boost towards the finish line.

My only wish is that All-Stars Racing more confidently embraced its racing credentials and spent less time worrying with its thin karting veneer.  As required by the kart racing rulebook that is apparently issued to all developers, items are littered about the tracks to be picked up and used on opponents for increased chaos and/or hilarity. These items felt out of place for a couple of reasons. Aside from simply looking tacked on (what does a flying green boxing glove have to do with any Sega series?) they rarely did little more than act as an abrupt brick wall to the technical thrills of carving a perfect line around the track. Its true that they can be turned off, but their inclusion damages the integrity of an otherwise consistent and impressive racing experience.

Aside from the items and some minor technical hitches (I've fallen through the track a handful of times), All-Stars Racing is a slick and exciting racer with appeal that transcends nostalgia and corporate iconography. I actually hurt myself playing this game. During one online race I was gesticulating wildly with the controller, desperate to place first. I got my desired position, but I also twisted my wrist in the process. The fact that this game could transform me from a stony-faced, veteran gamer into someone's over-enthusiastic, flailing uncle who doesn't understand how controllers work is itself proof of how Sumo Digital's synthesis of sight, sound and play has resulted in a uniquely intense and compulsively playable experience. Rating: 8.5 out of 10.

Disclosures: This game was obtained via retail store and reviewed on the PS3. Approximately 10 hours of play was devoted to single-player modes (completed 1 time) and 4 hours of play in multiplayer modes.

Parents: According to the ESRB, this game contains cartoon violence, comic mischief, mild suggestive themes. There's nothing to worry about here, though Knuckles shouting "Shut up!" every time he passes someone seems overly rude.

Deaf & Hard of Hearing: Approach with caution. While boost levels are denoted by the color of flame coming from the backs of the racers, it was hard to tell when certain characters went from yellow to red. So much so that I found myself relying on sound cues almost exclusively. Not a game killer, but worth noting.

I’ve read a couple of reviews that make me want to pick this game up (well written review by the by!), now if only I had the money to do so. Sounds like a great little run on the racetrack. I find it interesting you bring up the weapons/power-ups issue. The Mario Kart franchise has gotten more and more ridiculous due to some of the power-ups, when the original game was more about the racing. Even the N64 version, blue shell and all, was more focused on tight racing than silly/stupid weapons. Again, well written review. Maybe I will get… Read more »