A summer blockbuster in more ways than one 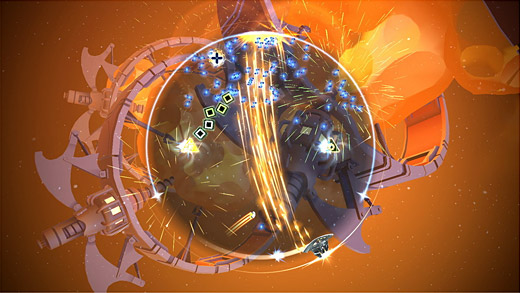 HIGH It was a feast for the eyes and ears all the way to the end.

LOW When it's over, it's really over.

WTF The "storyline" piqued my curiosity more than it probably should have.

Don't get me wrong, Shatter is a fun game. I sat down and completed the game from start to finish and at no point did I feel like I was struggling against boredom. On the contrary, as I blew through its final sequences I found myself wondering what else the game had in store for me. Therein lies the rub. Upon being dumped back to the title screen I was dismayed to see that the only noteworthy addition to the game was a boss rush, which hardly had me chomping at the bit.

Perhaps it's my fault for bringing my preconceived notions to the table when playing Shatter, but I always expect these types of arcade games to have some kind of endless or challenge mode to give the player some added value beyond the main game. I was shocked to find that Shatter had neither of these. The game's mechanics, with its weighted, magnetic, vacuuming and multiplying blocks, practically beg for some kind of insidiously designed extra levels.

I'm not saying that just because any game has potential for a robust challenge mode that developers are required to include one, but Shatter in particular underutilizes these mechanics so much that it feels like a necessity. Despite the unique characteristics of the various block types, it was very easy to just smash my way to success with little consideration for their properties. Shatter is very player-friendly, and the result is that once it was over I felt like I had just finished an extended tutorial for a game that hasn't even been made.

I don't regret the time I spent with the game and Sidhe has definitely demonstrated some serious chops here, but that doesn't stop Shatter from being a Michael Bay movie in game form. Flashy, fun, forgettable, and over in a couple of hours. Rating: 6.5 out of 10.

Disclosures: This game was obtained via retail store (PSN) and reviewed on the PS3. Approximately 2 hours of play was devoted to single-player mode (completed 1 times).

Deaf & Hard of Hearing: Totally accessible. There are no necessary auditory cues or un-subtitled cut-scenes to be found here.