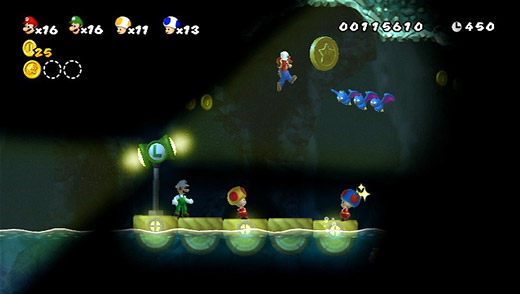 HIGH Watching rivalries and alliances unfurl and collapse over the course of a single stage.

LOW With four players, the final stage was filled with nothing but weeping, wailing, and the gnashing of teeth.

I hold no grudges against the blue-collar emperor of platforming. As one of the few who managed to squeeze a decent amount of enjoyment from Super Mario Sunshine, it would take a special kind of nakedness to compel me to call him out. As it so happens, Nintendo has tailored exactly that in New Super Mario Bros. Wii. Mario is no stranger to cynical cash grabs (see Mario Party 1-8), but this is the first instance in memory where those greedy hands have stretched directly into Mushroom Kingdom.

Right out if the gate, the title itself, replete with attention-catching sunburst behind the word "new," doth protest too much. A very faithful revival of the bros. two-dimensional outings, there is little new to see here. Aside from could've-been-great multiplayer and some inelegantly implemented motion controls, the only contribution this installment brings to the series is an absolutely slavish dedication to plucking every nostalgic heartstring at the expense of gameplay. The basic structure of hopping and bopping from left to right remains unchanged and nearly every element of the game—from the backgrounds to the enemies to Mario and co.'s available moves—references some prior outing. Mario can triple jump (like in Super Mario 64!), and spin jump (just like Super Mario Galaxy!), the koopalings are back pulling boss duty (Super Mario 3 and World!) And those guys that spit out the rocks and throw them at you from SMB 2 even make an appearance (remember them?! Me neither.) Appeals to nostalgia aren't inherently bad, or even unwelcome, but the densely-packed winks and nods of NSMBW exist in lieu of substance, instead of as a complement to it.

Yoshi could be the poster child for this philosophy. When he was first unveiled a cheer went up from Nintendo fans across the net, and the lovable green dinosaur was heavily promoted as a feature in the run up to NSMBW's release. Turns out he's only available in about three stages. What's more, he serves less utility now than he ever has, having been reduced to the dubious position of power-up dispenser. It's clear that this was a classic bait-and-switch: the inclusion was made to serve the advertising, and the implementation was an afterthought. The aforementioned spin jump and triple jump seem similarly out of place, existing for their own sake rather than enhancing the gameplay in any meaningful way.

This kind of lazy implementation is hardly limited to the game's self-referential moments. Far from it, NSMBW practically makes it a theme. Each of the new powerups are basically rejiggered old ones, excepting the game-breaking propeller hat, which allows the player to effortlessly fly over any and all obstacles, no momentum required. The motion controls don't fare much better. It seems that Nintendo themselves still can't come up with an interesting way to use their own technology, with waggle mostly covering for actions that could be better served by a simple button press, such as spin jumping or carrying items. Occasionally, players are instructed to tilt the Wiimote to make a platform lean or to direct a spotlight, but that's about as fresh at it gets. 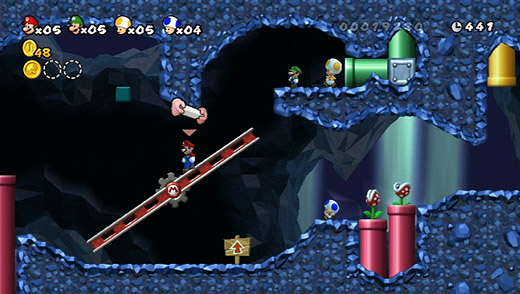 Crummy powerups and shoehorned waggle would be easy to forgive if the game lived up to the the series's pedigree, but  even the time-tested Mario action runs into snags. The basic platforming is still intact, but the intensity of the older games is almost entirely absent. Each stage is punctuated by safe spaces that keep the pace of the game hovering somewhere between tame and tepid. Mario even runs slower, controlling more like an actual overweight plumber than the nimble Jumpman of games past. Only in the final stages does NSMBW approach the frantic heights of his earlier outings. Still, on the rare occasions that my inner jaded gamer retired to his angrydome, I admit that I found myself enjoying the runs and jumps, and found satisfaction in getting yet another 1up even though I already had 33 lives.

I suspect that the spare level design can be explained as a concession to the much touted multiplayer, especially since the multiplayer is where the game really comes alive. It's less about cooperation than the dynamic chaos that precipitates when four people are stealing power-ups and throwing each other down pits. In the case of my family, if someone started dying less than the others, the casualty prone players would hunt them down until we all shared the same embarrassingly high number of continues, which the game thoughtfully tracked for us. Many a brutal jihad was waged over something as little as a mid-air bump, but there was something about the wild free-for-all that kept us coming back even though each session ended with proclamations of never playing with Carl again.

Unfortunately, even this bright spot comes with an asterisk. Up until the midgame, the (sometimes-not-so) friendly competition stayed within reasonable distance of actual anger and hurt feelings. The later stages are another story. These stages—the ones which actually presented some challenge in a single-player game—are horrendously unfriendly to games of four players. If all four players lose their last life in a single stage, the entire group is sent back to the last save point, and this did happen to us. Total buzz-kill. Our run reached its nadir in the final level, where, after many, many, many failed attempts, I raced ahead of everyone, abandoning them to their fates in a reckless dash to put an end to our collective suffering. Instead of a feeling of accomplishment, my only rewards were grumbles of relief, and being sarcastically christened "Big Hero" by my girlfriend.

NSMBW isn't unfun. It's uninspired. Like the games that came before it, New Super Mario Bros. Wii evokes concepts and imagery presented in its predecessors. Unlike those games, it makes no effort to expand upon any of those ideas. It falls short of their legacy of great platforming with the exception of the endgame, and in that same endgame the multiplayer—its greatest success—crumbles. In an effort to capture the imagination (and $50) of gamers, Nintendo has created a sales pitch with a game wrapped around it, and their cynicism has resulted in a hodgepodge of nostalgia without identity or imagination. Rating: 6.0 out of 10.

Disclosures: This game was obtained via retail store and reviewed on the Wii. Approximately 9 hours of play was devoted to single- and multiplayer modes and the game was completed two times.

Parents: According to the ESRB, this game contains comic mischief. I'm not sure what that even means here, but the game is totally safe unless you or your children are sensitive to the banshee-like screaming that will occur during multiplayer sessions.

Deaf & Hard of Hearing: There are no significant auditory cues here, and the extremely basic narration of the game is delivered through on-screen text.

Matt: Thanks for the thoughtful response, and coming from a rhetorician, the compliment means a lot. I can see where you might get that idea from, but my single and multi-player plays actually ran sort of parallel to each other. While I did complete my solo run after the multiplayer session had finished, my first sessions with the game was by myself, with a little 2 player thrown in, and I still found myself underwhelmed. That initial experience is what motivated me to corral up the loved ones and force them to play the game with me, Clockwork Orange style,… Read more »

By the way, I should also note that I really enjoyed *reading* your review. Even if I disagree with your eventual take on the game and your score, I think it was a beautifully written review.

(Not enough people take time to acknowledge how well written some reviews are, I think. Review writing is an art!) 🙂

Well, that’s sort of what I was getting at: separating the game’s marketing from its actual gameplay. Neither one of us can truly gauge whether most will play it alone or with others, but since both you and I completed the game alone, I would venture to say it’s quite possible that the game performs well enough as a solo endeavor. I didn’t skip over the parts of your review talking about level design, etc., but I DID suggest that your frustration with the multiplayer somehow tainted your reaction to the levels. I certainly didn’t notice the “safe zones” you… Read more »

I thought I addressed this in the review, but in addition to playing through the game with four players, I actually did complete it by myself. I can see how the game would be less frustrating with only 2 players, but lessened frustration didn’t equate to increased enjoyment. When playing by myself, I couldn’t shake the feeling that a lot of concessions were made re: level design to ensure that the levels weren’t unplayable with more than one person. In the Marios of yore, I would often overcome one obstacle only to be immediately presented with another one that required… Read more »

Trent, if the game had been 1-2 players only, would you have enjoyed it more? I think multiplayer, even 4-player “party” games, are an important component of any game that advertises it as a key feature, but your experience of the level design, or even the game as a whole, seems to be tinted with the frustration of playing with three others. While I agree that multiplayer in NSMB can be a frustrating experience (and I never got to play with more than 2 others), I don’t think it’s necessarily the most indicative experience of how people will go through… Read more »

Anonymous: You must really have it out for that reviewer 😛

Crofto: That LittleBigPlanet comparison is right on the money. Kudos.

Mario Kart is a good example of a game that did it right, but I felt the series got slightly more complicated until it no longer hit that sweet spot.

Part of me wonders if side-scrolling platformers could ever be truly multiplayer friendly.

Although I wasn’t as disappointed with the game as you (I always knew what to expect with it) I do fully agree about the multiplayer; it makes the game worth buying, but some of the levels (especially later ones as you pointed out) are obviously not meant for 2-4 players, but rather 1. In this sense I level the same criticism towards it that I do with LittleBigPlanet in that the game fails to work as a socially enjoyable gaming experience. If you want friends and family to enjoy something then it needs to be balanced and scaled properly; challenge… Read more »