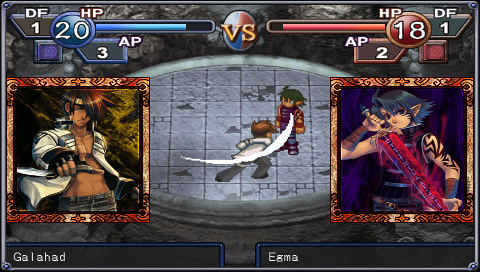 LOW Rebuilding my deck from scratch to pass one particular battle.

I'll be honest, I only bought Neverland Card Battles because it had Yuke's logo on the cover. I've never been into their yearly WWE or UFC titles, but something about their less gladiatorial offerings has always charmed me. Released once every few years—usually in the form of an unremarkable hack-and-slash—these games somehow have me falling in love with them despite their obvious technical shortcomings. I even modded my PS2 to import their Berserk game, less for the license and more because it was another chance to experience Yuke's special brand of mediocrity. I only found out later that Neverland Card Battles was just published by Yuke's, but as a game with lackluster production that still kept me coming back for more, it fits their MO perfectly.

In Neverland Card Battles players assume the role of Galahad, a wandering gambler, who is summoned to a mysterious shrine for unexplained reasons and granted the powers of a Dominator. Dominators can use Spectral Cards to do battle with one another in the shrine of Cardinal Arc, and it falls to Galahad to journey to the shrine's lowest level and halt the advent of an evil(ish) god. Along the way he'll encounter a handful of anime archetypes, all of whom want to put an end to his quest, but not before first spewing some of the most awkward dialog I've seen in a game since the original PlayStation.

The story is just a catalyst to get the proceedings underway. Battles play out on grids of differing shapes and sizes. Before using any cards, Dominators must first claim territory by walking over it. The squares then assume the color of the respective Dominator, and on each subsequent turn they confer a number of "earn" equal to the amount of claimed territory. Each card comes with an earn cost, and it is through the utilization of these cards that the player must defeat enemy Dominators. Basic strategy involves balancing the costs of the cards in one's deck with their earn-per-turn rate (hey, I didn't name it).

One of the most enduring shortcomings of digital card games is lackluster AI. If a human player and an AI opponent face off with identical decks, nine times out of ten the player will mop the floor with the poor computer. Neverland Card Battles does little to buck this trend.

Where Neverland Card Battles does differ, though, is in how it strictly limits players' access to new cards. Rather than being able to purchase or find cards freely, five to ten cards are doled out upon each successful encounter. That's not a lot of cards, and feels like even less when duplicates keep popping up. Meanwhile, each new opponent faced has a whole deck of solid cards that are assembled specifically to work together as a whole. 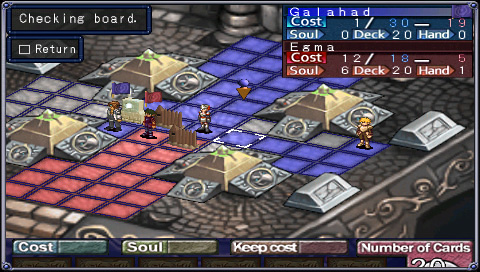 By itself this might sound intimidating, but it gets worse. Galahad's stats are static; 25 HP and 3 attack for the entire game. Not so for opposing Dominators, with HP and attack values that are nearly double Galahad's by the final battle. With unit cards possessing only a small fraction of Galahad's increasingly outclassed powers, it wasn't uncommon to witness my entire army ripped apart unaided by a single enemy Dominator.

If this sounds like sloppy, unfriendly design, that's because it is, but a funny thing happens when overwhelming advantages are placed in the hands of incompetent AI; a legitimate challenge arises. Assembling a decent deck from the meager card selection I had was taxing enough, but once the battle was joined I had to be constantly mindful of the movement and positioning of every unit on the board. At times the mismanagement of a single unit could spell the difference between glorious triumph and abject defeat.

As the difficulty ramped up I found myself developing ever more nuanced strategies, and integrating cards into my deck that I had at first dismissed as useless. Micromanaging my play style to overcome incredible obstacles with a deck of total scrubs gave a real sense of accomplishment that grew right along with the power of my foes.

Still, this masterful learning curve seems unintentional, the result of gameplay so imbalanced that it circles the spectrum back to being fun again. While I certainly enjoyed the challenge, my enjoyment felt almost self-made. In order to overcome Neverland Card Battles' successive brick walls of difficulty I was forced get creative.

It's not just the imbalanced gameplay that leads me to suspect that most of the game's good qualities were accidental. Nearly every aspect of the game seems totally amateurish; the graphics resemble a B-grade Super NES title with music to match, and the story (in tandem with an incredibly literal translation) is laughable. Even while being so technically undemanding, the game still has to take a second to load the stilted two frame animations of every attack.

The production values are pretty abysmal, and it's far too unforgiving for anyone new to the genre, but Neverland Card Battles occupies a unique space as far as digital card games go. Until game AI can match the human mind, maybe more card games should actively undercut our natural advantages. For card game vets seeking an unconventional challenge, Neverland Card Battles is a great (and it might be the only) place to look. Rating: 6.5 out of 10.

Disclosures: This game was obtained via retail store and reviewed on the  PSP. Approximately 7 hours of play was devoted to single-player modes (completed 1 time). No time was devoted to the multiplayer.

Parents: According to the ESRB, this game contains mild blood, mild fantasy violence, partial nudity, and use of tobacco. I didn't see any nudity, partial or otherwise, and to be honest I feel like the T rating might be a bit harsh for the game. I'd give it an E10+ at most.

Deaf & Hard of Hearing: All relevant data is presented on screen via text. No problems here.