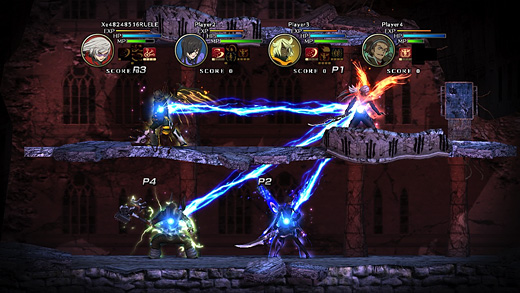 HIGH Starting the first stage and being greeted by a screen full of faceless baddies and an earful of cheesy, pulse-pounding electronic music.

WTF Do we really need to see the same unskippable cut-scene every time a spell is cast?

Evolution is a process fraught with failures. For every species currently flourishing on Earth, there are untold numbers of genetic mistakes that didn't survive a single generation. Despite of the success of their ancestors, these failed species were imparted with mutations that only disadvantaged them, leading to their demise. Video games may not be creatures of flesh, but their evolutionary course is similar. Many genres share common ancestry, the evidence of which remains visible in modern iterations. As with biological evolution, high profile hits are the exception, while forgotten non-starters crowd the fossil record. Feelplus's latest effort, Moon Diver

, is destined for the second category.

Moon Diver certainly has strong genes. The director, Kouichi Yotsui, is the father of Strider, an action-platformer so significant that acquiring a faithful console port is considered one of the Sega Genesis's greatest victories. This heredity is obvious. The acrobatic ninjas of Moon Diver flip across the screen, cling to ceilings, scale walls, and bisect foes with crescent-bladed sabers. The abilities unique to Moon Diver are natural additions: A double-jump that pulls double duty as an aerial attack, an automatic swipe when mounting or dismounting a platform, and a charged slash that can clear a dozen enemies with a single execution.

I love when action games marry combat utility to basic movement, and doing so makes particular sense in a descendant of Strider, where the titular hero's defining characteristic was his incredible mobility. If these had been the only new inclusions in Moon Diver, I would have happily accepted it as a conservative successor. However, the ecosystem of gaming has changed quite a bit since the advent of Strider, so Feelplus has gone well beyond these welcome tweaks; online multiplayer, a level-up system, and collectibles are all in attendance. These features are intended to modernize a legacy, but each one detracts from what could have been an excellent arcade throwback.

The most glaring issue with Moon Diver is that while it is designed to accommodate both on- and offline play with the same set of stages, it's never comfortable doing either. The game is hard, often cheaply so, with off-screen lasers that can vaporize a player upon contact. The stages are also unusually lengthy for a game of this type—culminating in a final stage that is no less than four times as long the rest—and when a single death means returning to the start, aggravation sets in quickly. I could farm enemies and amass experience to level my way through difficult obstacles, but the idea of grinding in a game of this nature (or any nature, to be honest) irritates me on principle. 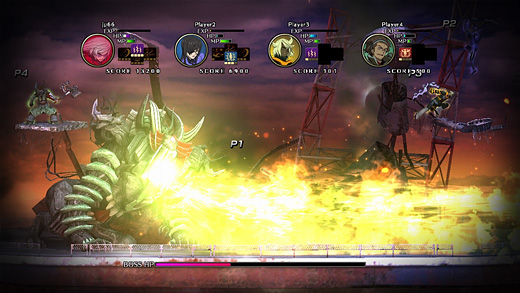 Multiplayer offers a seeming solution to this by allowing surviving players to revive a downed ally, but playing with others entails a bevy of unique annoyances. The camera concedes only the smallest amount of extra real estate when players spread out across the screen, often resulting in some players being "dragged" by the field of play while others race recklessly ahead. Another issue is that Moon Diver's difficulty does not scale with the number of players. Even two players, with their ability to infinitely revive one another, can feel like overkill in situations that are almost impossible for a lone ninja.

Moon Diver's primary collectible, Moonsault Combinations (or MCs), awkwardly straddle this single-player/multiplayer fence in a similarly unflattering way. These items are spells that are at their most potent when used in combination with other players, but attempting to gather them with a group is almost sisyphean. Each MC can only be gathered by a single player per session, meaning that every player invariably races towards these glowing orange treasures any time they appear onscreen. Even if a teammate already has a specific MC, there is nothing to stop them from dashing for it on sight anyway.

Moon Diver isn't a complete bust. The level design occasionally echoes its venerated predecessor; quickly flitting across a series of crooked, crumbling platforms while fending off monsters and simultaneously evading airborne mines, contrasted with the cruel penalty for failure, can generate a nostalgic sense of excited tension. I can also appreciate Moon Diver's silly narrative. Stages are bookended by low-fi cut-scenes that gesture towards an ephemeral, nonsense conflict reminiscent of vintage Capcom arcade titles. It's too bad, then, that repeatedly failing those tense challenges and being forced to rewatch those vague cinematics quickly robs both of their familiar charms.

For years I've hoped for a modern follow-up to Strider and it looks like I'll be waiting for some time yet. Most of the enjoyment I gleaned from Moon Diver

seemed to come in spite of the game, and each bit of fun was inextricably attached to a sense of resentment toward the misguided elements that denied its potential. Efforts to align Moon Diver's classic gameplay with an environment 20 years removed from its progenitor have only done it harm. The greatest shame is that the game did not fall victim to the caprice of an indifferent natural order; Moon Diver is betrayed by the deliberate adaptations of rational designers. Rating: 5.0 out of 10.

Disclosures: This game was obtained via paid download and reviewed on the PS3. Approximately 3 hours of play was devoted to single-player modes (completed 1 time) and 5 hours of play in multiplayer modes.

Parents: According to the ESRB, this game contains animated violence.The violence here is comparable to that of a Saturday morning action cartoon. There's not much to be concerned about here.

Deaf & Hard of Hearing: In the review, I mentioned off-screen instant-kill lasers. The only way to reliably defend against these menaces is to hear them activating first. For this reason alone, I cannot recommend this game to hard of hearing gamers, unless they have a high tolerance for frustration.

Isn’t it always the way, Usually I read the platform the game is for before I read the review.

I got myself all worked up, it looks really good, only to then read PS3, and Xbox.. 🙁

Not for my trusty PC…