Making a Case for Stagnation 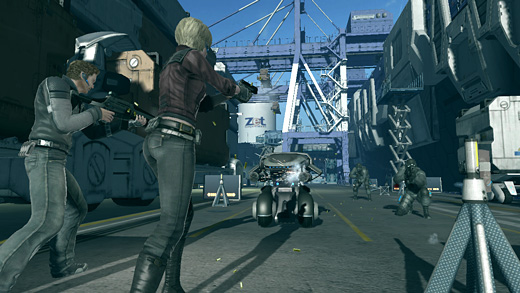 HIGH Pinning down a hostile invader with a small army of machine gun equipped robo-monkeys.

LOW Having to take out entire waves of enemies solo because my entourage was intent on trying to shoot through walls.

has everything going for it. It bills itself as an intense cover shooter where players can mentally enslave weakened enemies and freely jump into and control almost any mobile entity on the battlefield. Given the rapid stagnation of the cover shooter genre, that description alone is enough to draw my interest. Not content to stop there, the game also includes a seamless multiplayer component that allows players to pop into a host's single-player campaign unannounced, either to help or hinder their progress. How these ideas manifest in the real world is another matter, and Mindjack is long on ideas and painfully short on execution.

The protagonist of Mindjack is Jim Corbijn, a special agent in the fictional FIA on a secret mission—the details of which are left unexplained for the entire game. More significantly, the protagonist is not the entity the player controls. Instead, players control a "Wanderer," a kind of digital ghost, that can exert its will over both humans and AI. Players are free to hop around encounters, posessing and enslaving to their hearts content, but they must always be mindful of Jim's status. Jim serves as a home vessel for the player's Wanderer—as with his mission, his relationship with the Wanderer is never illuminated—and if he dies, the game ends.

From the start, Mindjack fails to explain its most basic conflicts and relationships, and these bone-headed omissions foreshadow the kind of egregious mistakes that taint the game's every aspect at even the most basic levels.

Strip away all of the nifty concepts, and all that's left of Mindjack is a run-of-the-mill cover shooter, or at least it would be run-of-the-mill if it wasn't so fundamentally flawed. Even for video games, the AI here is particularly bad. Enemies love to pop their heads out of cover and then do nothing, a habit that allowed me to beat most of the game with the standard starting pistol, effortlessly headshotting "highly trained" soldiers from the first encounter to the last.

When not being targets for headshots, enemies often leap completely into the open, run in circles, and block each other's lines of fire. The AI isn't the only problem. Sprinting and sticking to cover are tied to the same button, but going into cover seems to take priority in every case. Attempts to close the gap between myself and the opposition were punctuated by Jim desperately latching to every waist-high piece of concrete that passed within a 4-foot radius. On the occasions that I was actually in cover on purpose, my bullets would regularly be eaten by some mysterious chunk of invisible cover, even if the line-of-sight between myself and my intended target was clear. 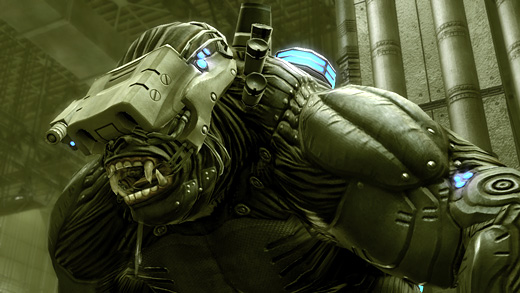 I've been able to forgive worse sins in games that have a decent hook—a compelling narrative, an evocative atmosphere, or a nifty mechanic—which makes it especially disappointing that Mindjack's "hooks" are as flawed as its foundation.

Mindslaved enemies are unbelievably dumber than enemy forces. They are insistent on shooting through solid surfaces, and when not doing that, they can be expected to run headlong into the deadly embrace of their former comrades without firing a single shot. The only practical use of these unwilling allies was as spastic decoys.

Direct possession was similarly fraught. Aside from being able to assume control of enslaved foes, each encounter is sprinkled with a handful of civilians and mechs that can be possessed. The game itself suggests using possession as a flanking technique, but this is completely undercut by the telepathy of enemy AI, which causes them to instantly fire on any freshly animated body regardless of position. Also, while one might assume otherwise, non-humans are almost completely worthless. Mechanical and cybernetic units can't mindslave weakened enemies, and more critically, they can't heal allies. Any second spent outside of Jim is a second he will probably spend trying to catch rockets with his face, so a healing ability is a necessity. They also have other frustrating limitations, like not being able to travel up inclines—even when airborne—and some can't even adjust the height of their aim.

With so many problems, it would be impossible for a good multiplayer component to redeem Mindjack, and the one included in the game falls short of even that adjective. Benevolent players joining in add nothing to the experience, serving only to make an easy game even easier. On the other hand, malevolent Wanderers are a serious pain.

The game is organized into chapters that are broken up by encounters, and each encounter is treated as a discrete match between opposing players. If the host wins, all players continue on to the next encounter. If the invader wins, the host is sent back to the beginning of the entire chapter. Given that enemy soldiers are slightly more competent than allied AI, and that they typically far outnumber the good guys, invading Wanderers have every advantage. Opposing Wanderers can add some desperately needed spice to Mindjack's permeating blandness, but more often than not they only add the frustration of repeated trips through familiar zones. I don't doubt that the intention was for sizable teams of opposing Wanderers to go head-to-head through the game's entire story, but the online environment is already a ghost town (no pun intended) only two months from release.

The cover shooter genre has plenty of untapped potential. Vanquish hinted at this by kicking up the pace a few (hundred) notches, but Mindjack is perhaps the first to actively introduce truly new kinds of gameplay, and I had my fingers crossed for its success. Unfortunately, the finished product is about as botched as a game can get. If Mindjack

makes a case for anything, it would be that maybe the standard stop-n-pop cover shooter isn't so bad after all. Rating: 3.0 out of 10.

Disclosures: This game was obtained via publisher and reviewed on the Xbox 360. Approximately 7 hours of play was devoted to single and multiplayer modes, which are unified.

Parents: According to the ESRB, this game contains blood, violence and language. While all of these are definitely present, Mindjack didn't impress me as any gorier or foul-mouthed than a prime-time television show.

Deaf & Hard of Hearing: Mindjack gets things right here. All text is subtitled, the status of Jim and his partner is always displayed onscreen, and the direction of incoming enemy fire is displayed via a damage ring common to these kinds of shooters. While many shooters have a running datalog of who killed who during online play, Mindjack has this datalog running at all times, and it tracks every participant, AI or otherwise. It's a convenient way to keep track of allies without having to listen for death cries.