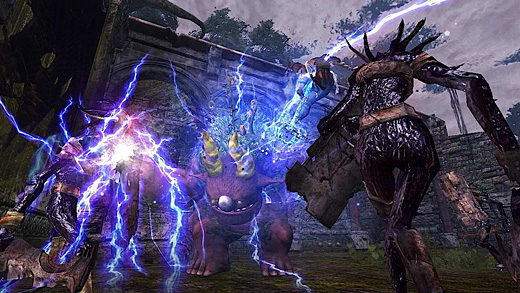 LOW The early hours with the game, where each uneventful hour felt like an eternity.

WTF I still can't figure out how to say "this game feels like a 10 dollar downloadable" without it coming off like an insult.

as a game with an identity crisis. In my first couple of hours with the title, I found myself likewise confused about what kind of game I was dealing with. It had elements from Zelda-style puzzle solving to Tenchu-esque stealth combat, and the narrative vacillated between epic and fable. Where Sparky and I part ways is that when I finally penetrated the fog of ideas, the game that emerged wasn't a garbled mess but an enjoyable (if unambitious) little ride.

When I began Majin, my expectations were grander in scale, and the game itself did little to contradict that. Tepeu, the human half of the protagonistic duo, was an orphan raised by animals after the rest of the human inhabitants had long fled the malevolent Darkness. These friendly animals imply that their wild kingdom had experienced great prosperity since the arrival of the shadows, which geared me up for a clever little indictment of society guised as an innocent fairy tale. The first boss all but confirmed these suspicions when he bluntly stated that the shadowy foes that populated the forsaken kingdom were once its human citizens, now twisted beyond recognition.

This concept was a promise never fulfilled. From then on, Majin drops any promise of moral ambiguity—along with most evidence of any narrative whatsoever—and the too-neat ending referenced by Sparky sees the Darkness utterly defeated, the humans peacefully returned, and the mighty Majin lulled to a well-deserved rest. The fate of the thriving animal kingdom that had been Tepeu's only family is never mentioned.

The early gameplay sections are similarly misrepresentative, though the gulf between first impressions and reality isn't quite as great. The opening of the game takes place in an ancient castle where Tepeu and the Majin solve puzzles in search of the exit. After reaching daylight, the pair realize that they need to defeat four lieutenants before being able to reenter the castle and face their decisive foe. The parallels were so similar to Zelda that I expected to be faced with a sprawling overworld, each corner pinned to the earth by a fiendish dungeon inhabited by one of these guardians. It didn't take much time spent outdoors to realize that the "sprawling overworld" had the same structure as that dilapidated castle–puzzle rooms linked by hallways in what might as well have been a straight line. 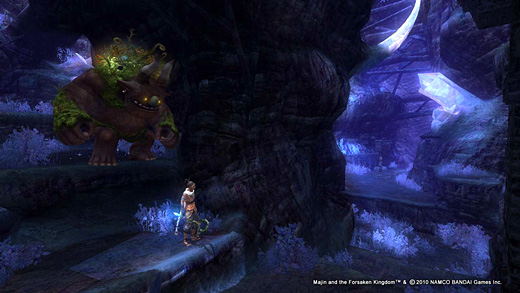 It wasn't until I had defeated Majin's second boss that I stopped resenting the game for misleading me and began to view (and accept it) on its own obfuscated terms. Largely without a storyline, the game was neither epic nor fable, and its structure was far too one-note to be a Zelda-clone. Majin was a series of mental challenges that, while festooned with the trappings of a (once?) living world, were transparently game-like.

Whether located indoors or outside, each "room" was a square of roughly identical dimension, and the man-made structures that littered them had no plausible purpose apart from being components in a player-targeted gauntlet: free-swinging gondolas amidst mazes of rickety plywood, catapults fenced in on all sides by high stone walls, and metal switches jutting out of rocky soil are just a few examples.

I'm confident that if Majin had abandoned its narrative aspirations in favor of a sterile game world of numbered challenges, it not only would have found a broader audience, but it would have also have achieved greater critical success. Indeed, once I began to view the game as a hollow series of team-centric challenges, I extracted exponentially more enjoyment from it. A dutiful slog blossomed into a joyful, uninterrupted dash through the game's second half, and I reached the finish with every optional doodad in tow.

With all that said, I don't view Majin's attempted atmosphere as a complete failure. While Sparky may not have been sold on the relationship between the two stars, I bought it readily. Tepeu came off to me as less of a dudebro and more of Disney's Aladdin, and I found his interactions with the Majin, particularly their victory dance after solving a tough puzzle, charming. In one noteworthy instance, Tepeu voiced his worry that the Majin, who had been absorbing the essence of every defeated shadow, might be in danger, and his delivery is imbued with the inhibited concern of a young man masking legitimate anxiety behind cool curiosity. Their interplay felt genuine, and was a secondary reason for my disappointment in Majin's thin plot.

In other respects, though, Sparky and I are on the same page. I, too, experienced the Majin's empty reassurances that he was going to get on that lightning, sometime, without a flicker of electricity to be seen. I, too, resorted to thinning the herd with Tepeu before inviting the Majin to join the fray. Still, I saw this as deliberate choice rather than inept AI, engineered to illustrate the heroes' mutual reliance. The Majin's empty elemental chanting was just an unfortunate side effect of that design.

The opening movie of Majin and the Forsaken Kingdom

only plays after one waits at the title screen for a set period time, which means many players have probably never seen it. This cinematic should've played upon booting the game up, because it is laced with hints concerning Majin's true nature. In the FMV, scenes of high-flying adventure are interspersed with brief sequences of two medallions rolling through a maze. Of these two contrasting images, it is the two medallions, imprinted with the images of Tepeu and the Majin, and the mechanical simplicity of their journey through a Rube Goldberg device that is the more honest about what kind of game Majin is. Rating: 7.0 out of 10.

Disclosures: This game was obtained via retail store and reviewed on the PS3. Approximately 11 hours of play was devoted to single-player mode (completed 1 time). There are no multiplayer modes.

I kinda feel sorry for this game because what it aims for is ever-more commendable in modern gaming. Playing the demo I was aware that its quality wasn’t of the highest degree, as your review suggests, but I still enjoy what the game can give.

I haven’t actually bought it yet, which further adds to my guilt, but I think a 7/10 is a good score for the game.