Let's See who the Craziest is 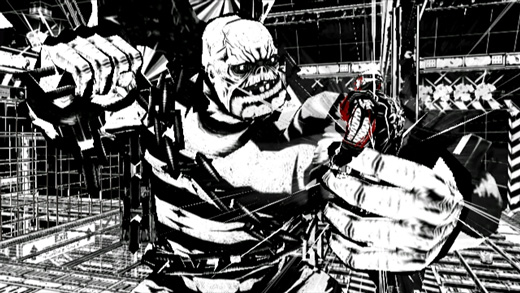 HIGH De-fleshing Jude the Dude with his own guns, then blowing apart his naked skeleton for good measure.

LOW The distinct lack of unlockables. Platinum is the reincarnation of Clover Studios, after all.

If asked to name the one aspect of video games that has generated criticism over all others, my answer would come without hesitation: violence. Gaming journalists often see and abundance of gore as a sufficient reason to run a multi-page spread on a title, and a quick glance at a list of bestsellers provides yet more evidence of the industry's enthusiasm for giblets. Even the most innocent sidescrollers usually involve the snuffing out of lives, albeit in a sanitized form.

What elevates the genre above interactive snuff is the fact that violence is only a veneer. High-octane third-person action games such as Bayonetta reward style rather than body count, and even the bloodiest shooters typically carry a whisper-thin life bar and an abundance of cover; strategy takes prominence over slaughter. Despite their apparent viciousness, video games are seldom about unrestrained violence. This isn't a review about those games though… This is a review of MadWorld. If violence is the style that disguises so much gaming substance, MadWorld is all style.

Surprisingly, that's not a bad thing.

The setup is a familiar one: The DeathWatch games—a free-for-all tournament of murder funded by the wealthy and powerful for their own entertainment—suddenly erupt on the island metropolis of Varrigan City. Bridges are destroyed, communications are jammed, and every resident is infected with a deadly virus. The vaccine is reserved solely for those who demonstrate a will to kill. The game's mysterious protagonist, Jack Cayman, appears on the island chainsaw-on-hand, seemingly intent on stopping the games. In true video game fashion, the only way he can stop the games is to enthusiastically participate in them, bisecting enough warm bodies to become DeathWatch's number one contestant. Cue bloody mayhem.

In each stage of MadWorld, the player must reach a target score within thirty minutes, and points are awarded for killing everything that moves. After achieving the required score, players can challenge the boss and move up a few (dozen) ranks. Jack is equipped with a few basic moves to do this with incredible ease, and the environments are littered with tools to make this job even easier.

With the camera locked tightly behind the protagonist, MadWorld communicates in a visual language similar to many third-person action games. It even even has a combo system that suggests a deeper similarity. Jamming a lamppost through someone's head and then holding them against a perilously exposed sawblade is worth more points than simply punching them until their skull explodes. It's all an illusion, however, as MadWorld lacks the considered gameplay of its action brethren. These combos don't multiply score, they simply stack it; killing one enemy with a lamppost and another with the sawblade would actually net more points. What's more, every level is so densely populated with the infinitely respawning soon-to-be-dead that running wild with the chainsaw can easily unlock the boss before time runs out. 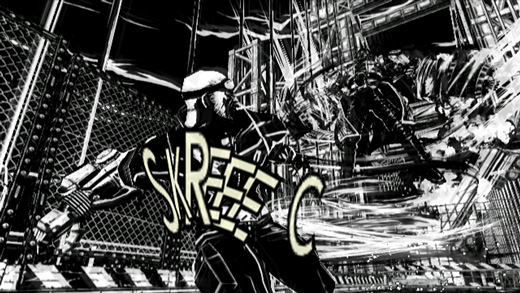 What sounds repetitive in text is actually incredibly visceral in execution, and each of the game's elements seems geared to maximize it. Consequently, MadWorld masterfully cultivates a feeling of being indiscriminately powerful. The bloody art direction and easily disposed of opponents are the most obvious pillars of this philosophy, but they are far from the only ones. The omnipresent announcers constantly banter about Jack's numerous victories being a foregone conclusion, and the lyrics of the (actually pretty great) rap soundtrack typically detail how the homicide veteran's opponents will be unrecognizably mangled. For once, I even appreciated the waggle. Miming the action of holding a man overhead and tearing him in half is infinitely more satisfying than pressing a button, and the detection is incredibly forgiving, so immersion was rarely broken by finicky inputs.

A game about rampant murder might raise some red flags, so it's to Platinum's credit that the violence in MadWorld is no more serious than a Tom and Jerry cartoon. Well, in a literal sense I suppose it gets a lot more serious, what with people dying by the score and everything, but it never feels that way. Even when Jack himself dies, the announcers drop some mocking one-liners and then it's back to the grindhouse without missing a beat. It's all presented in such an over-the-top, unbelievable fashion that the game remains firmly grounded in the realm of safe spectacle, rather than coming off as a crass endorsement of real-world violence.

As liberating as it is to play a game where violence truly does exist for its own sake, that sense of overwhelming power can only sustain a game for so long. This fact didn't escape Platinum Games —MadWorld is short. Assuming a player used all 30 minutes for each stage, that only adds up to five hours of play. Even with (infrequent) deaths and bosses inflating that number, MadWorld would still be hard-pressed to pass the 10 hour mark. This is absolutely the perfect length for the game. When a game relies so heavily on presentation, brevity is a virtue. Regardless of the strength of that presentation, I inevitably become accustomed (and then numb) to its effects. MadWorld never even gave me that chance.

Hand-in-hand with my praise for the game's economical playtime is my biggest complaint: there just is isn't enough game here. That's no contradiction because completion time and replay value are two different measures, and MadWorld goes (wisely) light on the former and has (sadly) none of the latter. The game teases with DeathWatch challenges—special objectives unique to each stage—but I quickly learned there was no reward, and thus no incentive, for completing these. Given Platinum Games's historic penchant for unlockables, and the oddly pointless DeathWatch challenges, I suspect that the game fell victim to some unfortunate last minute cuts. Be that as it may, I can't help but feeling like MadWorld was done with me before I was finished with it.

Though it might be light on content, MadWorld still works as a refreshing approach to some very old subject matter. It might seem bizarre to say that a game stands out because of its violence, but in an endless blizzard of video game violence, MadWorld is a unique, bloody little snowflake. Rating: 7.0 out of 10.

Disclosures: This game was obtained via retail store and reviewed on the Wii. Approximately 11 hours of play was devoted to single-player mode (completed 1 time). No time was devoted to the multiplayer.

Parents: According to the ESRB, this game contains blood and gore, drug reference, intense violence, mature humor, sexual themes, strong language and is rated M for Mature. The ESRB speaks the truth. The announcers' commentary alone would be enough to make many adults cringe. The on-screen gore is over-the-top, but it is still incredibly violent. Adults only.

Deaf & Hard of Hearing: All of the cut-scene dialogue is subtitled, but none of the announcer commentary is. It's not critical to gameplay, but it's something to be aware of. Something else worth noting is that some stages have something of a mini-boss character that appears intermittently. The game pauses to properly introduce them on their first appearance, but later appearances are only signified by a change in music.

I think you’re spot on about the cycle sections being both fun and stupid, but I don’t know if I agree that the whole game should’ve been like that. the cycle portions felt like there was very little player participation. Anything you did caused total carnage, and sometimes the thugs would just crash all by themselves, which still counted toward your score. I am glad you mentioned the ending though. I left it out of the review because I was afraid I was squinting too hard to see things that weren’t there. Still, it’s hard to dismiss the fact that… Read more »

I believe the easiest was to improve the game would have been to make it strictly linear. The cycle sections were fun, although quite equally stupid in design. But the flow was faster, the repetition was carried automatically forth not by standing on the spot and hack the enemies.

But!, if i remember the ending and the story correctly it was a comment on gaming, brutal games and its gamers. The stupidity of violence and how we are trapped in this or something. So it had to be that way.

I get what you’re saying Sparky, and my brother ultimately ended up putting the game down for that very reason. This is MadWorld’s biggest failure, IMO. MadWorld is much more enjoyable when you forget about scoring points and embrace the uh…madness. I think that might’ve been the point, but Platinum made a mistake when they decided to encourage players to maximize their scoring potential via combos and whatnot. It’s kind of the anti-DMC, where being crafty and stylish makes the game LESS fun. When I stopped trying to squeeze 200,000 points out of a single corpse in favor of running… Read more »

I agree with a lot of what you’re saying here, Trent, but I thought MadWorld overstayed its welcome despite its brevity. The problem for me was that in most levels there were only one or two clearly optimal strategies for scoring. That encouraged me to stay in one place until I ran out of fodder temporarily. Then I would wander around until I found another convenient high-score location with some mooks hanging around. The effect was to encourage aimless, repetitive play rather than using high score opportunities to draw the player forward. So, I was usually tired of the levels… Read more »