Ok, but just for a Little While 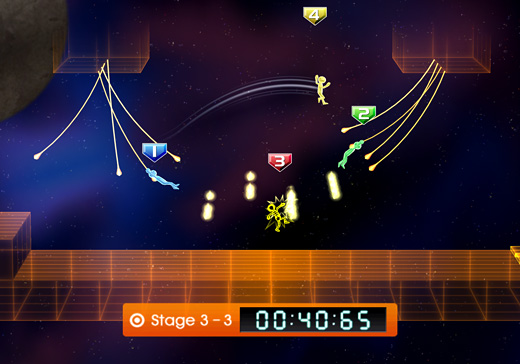 HIGH As with any mini-game collection, having a great time with my loved ones.

LOW Well that got boring quick.

WTF Does Sega really think us Americans are such trashy slobs that we have empty tissue boxes just piled up around the house?

For a long time now, the Wii has been characterized—with a healthy amount of derision—as the home of one genre in particular: the mini-game collection. In any given game retailer the Wii software shelves are lined with countless entries in the genre, with only a handful being worth the disc they're printed on. Perhaps this is the result of an industry uncertain of how to approach the new controller technology. Another possible explanation is that Nintendo set the pace themselves, considering the Wii still ships with not one, but two mini-game collections in the box, and the big N has hardly shied away from adding to that number in retail. Let's Tap! is Sega's attempt at cashing in on this runaway trend, and it stands simultaneously as one of the best and worst examples on the system.

As suggested by its title, Let's Tap! has a unique control method. Rather than waggling the Wiimote around or using the infrared pointer, players are instructed to lay their controllers button-side-down on an empty box. Let's Tap! insists that tissue boxes are ideal, but I found cereal boxes to be much more effective. Once appropriately situated, players interact with the game by lightly tapping the box, with the vibrations being picked up by the Wiimote, and that's all there is to it.

This has to be one of the most interesting utilizations of the Wiimote that I've seen so far. An out-of-the-box (pun unintended) controller deserves an equally out-of-the-box (I'm so sorry!) interpretation. While other developers repeatedly attempt the Wii's ability to track broad gestures and fail, Let's Tap! stands as an understated example of the controller's strengths. There's no risk of whapping other players with wild flailing, and no accidental trips to the menu from overzealous seven-year-olds accidentally mashing buttons during play. The most difficult thing about this control scheme is the simple matter of locating enough boxes to play on.

The collection's four games (well, five if we're counting the visualizer, but we're not) represent a pretty respectable spread of modes using this simple interface. Tap Runner is a race to the finish over a hazard-laden obstacle course; Rhythm Tap is a straightforward music game where players tap along to the beat; Silent Blocks is a sort of digital Jenga, where players must gently tap to extract blocks from an unstable tower; and Bubble Voyager comes in two flavors, with the single-player being a linear, star-collecting trip through a floating minefield and the multiplayer taking a top-down shooter approach, reminiscent of Asteroids. 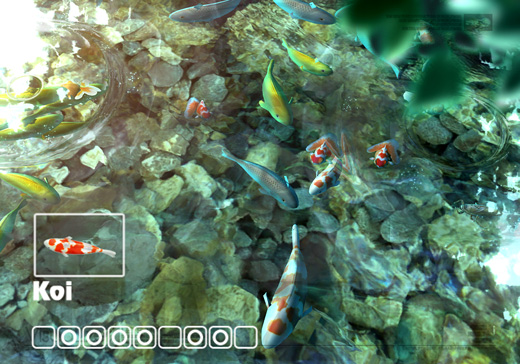 While there were some initial worries about the Wiimote correctly interpreting such indirect signals, after a bit of calibration—including wrapping our heads around the new interfaces—Let's Tap! presented a solid experience. The game's various modes just worked, and once that had been established there was plenty of fun to be had. On top of that, Let's Tap! gave incentives to keep playing, with more stages being unlocked as the available ones were completed.

After a few hours of merrily unlocking our way through the game's content, however, unfortunate cracks began to surface. Bubble Voyager failed to engage from the start; its simplistic multiplayer seemed to lack the polish and care of the other modes. Tap Runner had a decent number of stages, but varied little between them. Stage 10 might include a tightrope or a few boost pads that were absent in Stage 9, but overall they entire spread of stages felt incredibly similar. Rhythm Tap—which alleged that it differentiated between light, moderate and firm tapping—seemed to accept any inputs whatsoever. Gently bouncing a finger off of the box would register for a firm note just fine, while slamming it on light notes was also accepted without penalty. Silent Blocks escaped reproach for the longest, thanks to the addictive Alchemy mode wherein players removed some blocks in an effort to combine other, like-colored blocks into various precious metals. Its ultimate downfall was in the pure time investment a full round could take and, when a single mistake could cost an entire tower of work, seeing players hang it up before the game was complete was unfortunately common.

There were corporeal problems as well. Any new session of the game began with a calibration spree, as recombining the individual tapping strength of a group of people with a bevy of undiscarded boxes ensured that previous settings were never correct upon a later boot-up. Problems arose during play as well. As one might expect, setting the Wiimote on an empty box and tapping the hell out of it might cause it to move around a bit. In fact, it moved around a lot, and sometimes I'd find myself directly slapping the Wiimote itself and be forced to reposition it. Naturally, the three players who were suspended motionless, mid-jump as I paused the game to once again fix my setup grew ever more impatient with this problem.

Let's Tap!, with its bright, accessible aesthetic and peppy, J-pop soundtrack, has a lot of potential. In particular, I could easily imagine Tap Runner being fleshed out into a full-fledged platformer. As for the calibration issues, they could be easily resolved by shipping the game with standardized boxes—something Sega did for Japan and EU territories, but opted to cut for the North American release. Unfortunately, I can only evaluate the game as it exists, and Let's Tap! has a few shortcomings too many to wholeheartedly recommend. Be that as it may, if Sega ever wants to invite us to tap with them again some time, it would be a difficult invitation to decline. Rating: 5.0 out of 10.

Disclosures: This game was obtained via retail store and reviewed on the Wii. Approximately 1 hour of play was devoted to single-player modes and 5 hours of play in multiplayer modes. The game is not completable in the traditional sense.

Deaf & Hard of Hearing: It might go without saying, but the Rhythm Tap game will likely present difficulty for gamers who are hard of hearing, given its reliance on tapping along with the music. Aside from that one game, everything is presented clearly on-screen with no critical audio cues.