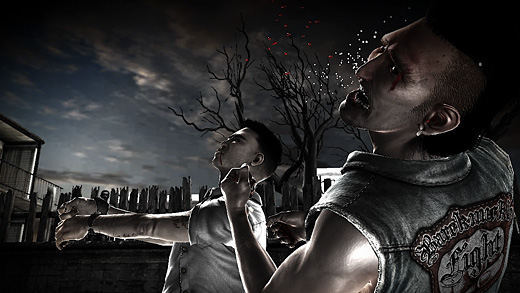 You may have not heard it by now, but I kinda love the PlayStation Move

. Sure it's derivative, but that's easy to forgive considering how effectively it fulfills the promise of motion controllers that was only hinted at with the Wii. I enjoyed it so much, in fact, that I went ahead and bought a second Move want in anticipation for The Fight: Lights Out

For those who don't know, The Fight puts players in the shoes of a filthy bare-knuckle brawler as he viciously punches a bunch of other similarly scummy dudes in various seedy urban locales. The selling point is that the game uses two Move wands—one held in each hand—to transfer real life punches into the game with 1-to-1 accuracy.

For the most part, these controls work…if you're right-handed anyway. For whatever reason, The Fight has no options for a southpaw fighting style. It automatically calibrates into a right-dominate stance every time. Well I'm left-handed, so this just would not do. I got around this for a time by assuming a "normal" stance during calibration, and the switching my footing when the fights started. This wasn't a good solution. While my hands would be in roughly the correct positions, it felt like there wasn't as much oomph behind my punches as there should have been. It seems that since the game was designed solely for the right-handed, there are invisible damage ratios attached to each hand. What this means is that a full-force left-hand punch won't ever do as much as an identical punch delivered with the right. Simply standing in a way that felt comfortable to me came at the expense of full damage output.

This is dumb design for a couple reasons. First of all, the southpaw stance has existed in pugilism since eternity. Secondly, in a game where the actual hand motions of the player are directly translated into the game, there is no excuse for an entire team of developers to forget that left-handed people exist. I mean, wasn't there a single lefty among them?

The Fight isn't alone in it's unfriendliness to left-handed gamers. Style Savvy, a fashion-store sim for the Nintendo DS, is designed to be played while the DS is held like an open book. All of the interaction takes place on the touch screen which, as anyone might have guessed, is on the right side. It would have been easy as pie to simply flip the images on both screens allowing left-handed players to hold the DS in a was that better suited them, but the developers didn't even bother. There is no good justification for this.

Another fun example is The Legend of Zelda: Twilight Princess. Link has always been left-handed, just like his famous creator, Shigeru Miyamoto. When Twilight Princess was ported to Wii, the entire world was flipped, including the hero, so that right-handed gamers would be more comfortable. Nevermind that players didn't actually swing the Wiimote like a sword (a little flick was all that was required), Nintendo apparently decided that simply holding a one-handed control device in the left hand was too great of a burden for right-handed gamers to bear. Also nevermind that in every game prior, the actions of Link's left hand were dictated by commands issued on the right side of every controller since the NES. While this particular game didn't present much of a control barrier to left-handed gamers, it's still interesting that once motion got involved gaming's most prominent (only?) lefty got the ax.

This might sound like a lot of whining over nothing. After all, I've been coping with right-biased control schemes for my entire gaming career. Besides, there are gamers with actual disabilities who have to overcome more onerous challenges than I have ever dealt with. If anything, that's exactly why this issue deserves attention. Accommodating left-handed gamers like myself is practically the smallest, easiest step developers can take to being just a tiny bit more inclusive. When—after decades of game development—designers still can't even be bothered with that, it doesn't bode well for anyone else.

With things like normal videogame controllers and regular mouse use, I’ve never had a problem. Using KBAM for games gives me fits though.

Do you have any troubles when playing with a normal controller? How about keyboard-mouse on a PC? Do you use your left hand for the mouse there?

I’m almost-ambidextrous, for me this is never an issue since the only thing I can’t do with my left hand is writing. The only reason for that is because I was told by my primary school teacher back then that its ‘normal’ to write with the right.

After reading this I actually started a small experiment and put my mouse on the left side of the keyboard, let’s see how that turns out…

I totally forgot about the Heavy Rain Move demo.

What’s most ridiculous about that situation is that the PS3 controller is identical on both sides. Why can’t left-handed players just use the face buttons for directional control instead? So many easy fixes, completely ignored.

This sort of thing really winds me up as in this day and age it should totally be a non-issue. I’ve also had issues with Heavy Rain, which does include a left handed mode but doesn’t cater for the fact you’re holding a dual shock controller in your right hand. It forces you to use the dpad side which is extremely uncomfortable when trying to hold and press triggers with your right hand in some sort of ‘death claw’ grasp. The block stacking game on PSN also has minor issues for me as it only accepts a counter-clockwise flick of… Read more »