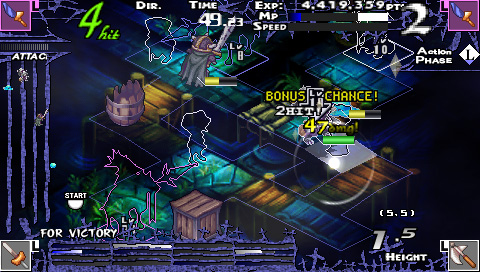 HIGH The first time I dominated an encounter after fully comprehending the battle system.

LOW Another last boss? Why can't this game just be over!

Back in my review of Hexyz Force, I expressed confusion that such a rote, stock-standard game could come from the developer responsible for such wildly offbeat titles as Riviera: The Promised Land and Yggdra Union. The majority of the games in Sting's catalog are infamous specifically for their unusual design and disregard for genre norms. After receiving Knights in the Nightmare—a game that attempts to fuse strategy-RPG with bullet-hell shooters—for review, this disconnect makes a lot more sense. For all of its innovations, Knights in the Nightmare utilizes a surprising amount of the conservative game design previously found in Hexyz Force.

I don't mean to imply that Knights in the Nightmare isn't an unique game. Thoroughly describing the battle system would take a thousand words of its own. To greatly summarize, Knights in the Nightmare is a game where the player takes control of a mouse cursor, and dodges bullets that fly across the desktop. Threats are dealt with by "clicking" on stationary units, charging them for a time, and then letting loose with powerful attacks. There is a lot more complexity to it than this; some unit types actually can move, all types have differently shaped ranges for their attacks, there are elemental affinities and weakness to wrangle with, and plenty more besides.

Sting includes a pretty robust tutorial on the main menu, but this is one situation where an in-game tutorial would've much better served the player. Learning the game means delving through an hour of training before even starting a new file, and even then there are several game concepts that aren't even mentioned, let alone explained. Players can attempt to fully learn the ins-and-outs of Knights in the Nightmare by reading a hefty amount of supplemental text included on the disc, but without being able to play the game at the same time a lot of the terms lack significance. It's completely possible to spend thirty minutes reading about mechanics only to forget them once in battle. It's also possible—for a very intelligent player—to read and comprehend every scrap of information out of the expansive tutorial section, and thus feel utterly unchallenged for the entirety of the game. 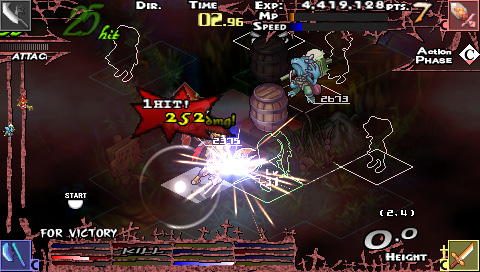 It's perhaps the height of irony that a battle system as esoteric as the one found in Knights of the Nightmare comes off as overly simplistic once understood. The game only features a handful of different enemy varieties, and each of these foes has a couple of standard bullet patterns. After encountering a new foe once or twice, their attacks become familiar and predictable. Even in a combined offensive with other enemies, these patterns continually become less threatening with each fight. Less than halfway through the game's 46 battles, encounters with standard enemies were essentially over before they had begun. Boss encounters, which pop up every two or three scenes, do present a unique challenge when compared to the regular fodder, but it isn't long before they fall into routines of their own. While no two bosses share the exact same moves, their giant, screen-covering attacks have enough in common that the same tactics can be reused again and again.

That's not to say the battle system is unfun, only that it's easily mastered, and couldn't support the game on its own. Fortunately it doesn't have to.

Between battles, Knights in the Nightmare is virtually indistinguishable from its Strategy-RPG brethren. The fusing and upgrading of weapons and units can be witnessed here in almost unaltered form. Knights in the Nightmare clings to genre-standard party management tropes with a devotion that easily matches the desire for innovation demonstrated by the battle system. The compulsion for micromanagement I experienced in Hexyz Force came back with a vengeance during my sessions with Knights in the Nightmare. I would often find myself spending more time and effort in the pre-battle setup than during actual encounters, and this imbalance became increasingly exaggerated as my mastery of the game's systems improved.

For the most part, Sting manages to ping-pong back and forth between the game's two modes in a way that kept my interest. It's only when the story begins to flounder that I found myself toughing it out just to see the credits roll. Initially the story is about the inexorable death march of an undead and immensely powerful king—the protagonist, no less!—as he is drawn to retake the castle he ruled in life. Along the way, he recruits the souls of his recently deceased loyal retainers and exterminates nearly every living thing that still remains. About two-thirds of the way through the game, on the cusp of the penultimate battle, Knights in the Nightmare abruptly directs players on the hunt for a MacGuffin, and introduces a spate of as-yet-unmentioned antagonists. This entire arc sacrifices a rich atmosphere—and my enthusiasm along with it—to simply pad the game's playtime. Up until this fetch quest, Knights in the Nightmare had cultivated a mood that was truly deserving of the game's title.

Knights in the Nightmare isn't the mind-blowing, avant-garde experience I had expected based on my familiarity with its developer, but it is a solid title and a frankly amazing port job from Sting. Knights in the Nightmare relied on the stylus and touchscreen of the Nintendo DS in its original incarnation, so bringing it to a system with much more conventional inputs is no small task. While writing this review, I frequently forgot that this game was a port at all, which is a testament to how naturally it controls on the PSP. Consequently, I was free to evaluate the quality of the game rather than the quality of the port. Aside from some serious endgame stumbles, Knights in the Nightmare does a good job of balancing the tried-and-tested with some legitimately interesting experimentation. Rating: 7.0 out of 10.

Disclosures: This game was obtained via publisher and reviewed on the PSP. Approximately 22 hours of play was devoted to single-player modes (completed 1 time).

Parents: According to the ESRB, this game contains alcohol and tobacco reference, mild fantasy violence, mild language and suggestive themes. Most of these descriptors aren't present in particularly offensive quantities, but parents should be aware that Knights in the Nightmare paints the picture of a pretty grim world.

Deaf & Hard of Hearing: There is a lot going on visually in battle, so there are times when listening is useful when trying to assess situations. In particular, some enemies will launch attacks that can be prevented by "mousing over" them a few times. These attacks are preceded by a chime, which I found myself relying on pretty heavily. They're not impossible to spot using only visual cues, and the attacks themselves are never serious enough that missing them would end one's game, but it's of obvious concern for hard of hearing gamers.