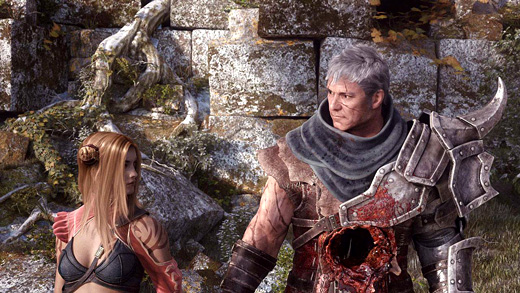 HIGH Ping-ponging a room full of enemies with a combination of spell and scythe, and watching them all meet their grisly fate simultaneously, tangled in the vines of Mag Mell's Rose.

LOW Getting knocked down a hole after failing a boss QTE 20 times.

WTF For being upset at having to execute all of her sisters, Gretchen sure seems to love making a graphic display of their demise.

Critics have not been kind to Knights Contract

. As of this writing, its average score on Metacritic is a paltry 49. In a critical culture where anything under a 70 is considered bad, a 49 is truly damning.

When playing through Game Republic's other recent release, Majin and The Forsaken Kingdom, I managed to discover a decent experience beneath the game's confused design, which caused me to wonder if Knights Contract had a similar "hidden goodness." As it turns out, the goodness in Knights Contract isn't hidden at all; the game displays its strengths early and often. The real problem with Knights Contract is that it is a good game trying its best to be a bad one.

Main character Heinrich Hofmann is immortal, meaning that the most an enemy can hope to do is dismember him. Even then, this situation is soon rectified with some frantic mashing of the X button. With death not a concern, players need only worry about the well-being of the other half of the duo, the witch Gretchen who is quite killable. Her death means game over.

Gretchen generally plays it safe by sticking close to Heinrich, but she can also be picked up and carried. In a bit of smart design, carting Gretchen around has no negative consequences. Heinrich still retains all of his mobility, and all damage is applied directly to him. On top of that, carrying Gretchen also restores her life. On the odd occasion that Gretchen decided to turn suicidal, I could just scoop her up and keep on rolling. While initiating any attacks would cause Heinrich to drop Gretchen, it was rarely much trouble to ensure I had transported her to a safe location before renewing my onslaught—and when I say onslaught, I mean onslaught. 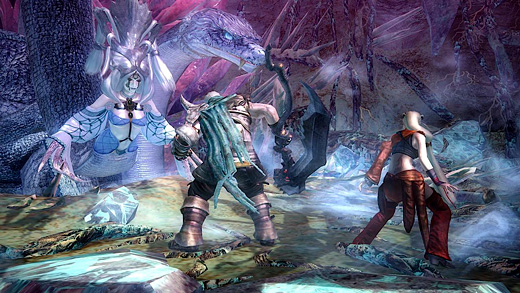 Heinrich's immortality-as-invulnerability means that he can wade into foes with abandon, eviscerating them with his gnarly (and oddly prismatic) switchblade-scythe.  Even more impressive are Gretchen's spells, which can be seamlessly integrated into Heinrich's combos. Among other things, she can summon blades from below, weights from above, and set nasty bear traps to ensnare foes. If an enemy is hit with one of her spells while near death, Heinrich can jump in with a finisher which results in a spectacular display of gibs and gore. The combat in Knights Contract isn't the deepest, but it benefits from the odd dance of dexterity required to fully employ it. Working the shoulder buttons to lock-on, switch to the spell menu, and cast—while simultaneously pressing the attack with Heinrich—created a unique sense of rhythm that kept fights interesting.

By the end of the game the team was dishing out a level of emasculating punishment that I haven't witnessed since last year's Dante's Inferno. When I killed a boss with a single throw of fully upgraded Maar's Lance, it felt less like an exploit and more like something perfectly in line with Knights Contract's philosophy of escalating power.

Like most combat-oriented action games, the environments in Knights Contract are little more than window dressing, but this is some excellent window dressing. The first chapters take place in a plague-stricken village, and the entire area looks pulpy and diseased, as if the town itself were infected. Later stages include a dilapidated castle tangled in webs of rain-soaked hair, and a mountain wreathed in the ethereal flames of magical energy. In an unfortunately common habit for action games, players are forced to revisit old areas, but on the second visit they are imbued with a look of ashy disintegration that keeps them from feeling entirely redundant. The graphics here aren't the most technically impressive, but there's a real heart to to the visuals that deserves recognition.

At this point Knights Contract sounds pretty great, and it would be if the game wasn't so intent on sabotaging itself. Frankly, this title possesses some of the most malicious Quicktime Events (QTEs) I've ever seen in a game. 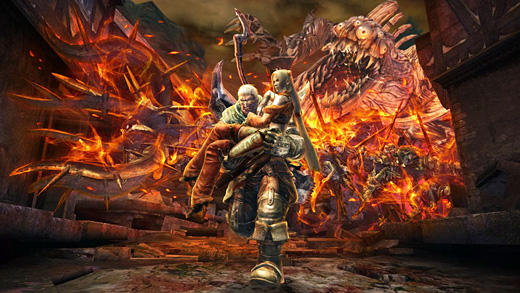 Each boss fight culminates with a series of button presses that must be executed perfectly to finish the encounter; one mistake revives the boss with a significant amount of health. Even after learning a QTE sequence by heart through repetition, I still found myself flubbing on them due to their strict timing, and I consider myself to have somewhat decent reflexes. I imagine there is a significant number of gamers who could simply never nail these required QTEs, and that's just bad design.

These QTEs are made even worse in the context of boss battles that include instant death. The sole exception to Heinrich's immortality is that all-too-familiar bane of video game heroes, falling down a hole. This isn't much of an issue during normal play, but boss fights are another matter. One particular mid-game boss took over twenty attempts due almost entirely to instant deaths.

The frustration from dying instantly becomes exponentially magnified when said instant death occurs immediately after failing one of the game's hateful QTEs. As bad as this sounds, it gets even worse in the game's final battles, where QTE failure itself becomes a cause of instant death. Of course, the deadly pits are still there too. It is no exaggeration when I say that several times I went from blithely enjoying the game to abhorring it.

Knights Contract reminds me of that friend from high school—I think maybe every guy might've had one like this growing up—who was way too into wrestling. For the most part he was a great guy, except for the times when he'd decide that a casual conversation was a perfect opportunity to throw me into an inescapable armbar, on which occasion I found myself wishing he was a dead person.

When I told people they would have to know him to understand why I remained his friend, they would nod knowingly, aware that human beings are complex and multifaceted, often possessing assets that redeem their flaws. Knights Contract

isn't a human being. It's data burned onto a disc. When I tell people that they need to get to know the game before understanding why I put up with profanity inducing bossfights, and all I get in return is a blank stare, I can't really blame them. Rating: 6.0 out of 10.


Disclosures: This game was obtained via retail store and reviewed on the PS3. Approximately 20 hours of play was devoted to single-player mode (completed 1 time). There are no multiplayer modes.

Parents: According to the ESRB, this game contains blood and gore, intense violence, language, and nudity. All of these are present and accounted for in copious amounts. The M rating is well-deserved.

Deaf & Hard of Hearing: The biggest problem for hard of hearing gamers will likely be keeping track of Gretchen when she's offscreen. I found myself listening for the audio cues of enemy attacks to tell if Gretchen was being harassed because—for whatever reason—I repeatedly failed to notice any changes in the health bar until it was almost too late. Otherwise, the game does a good job of displaying all relevant info, including those devilish QTEs. All dialogue is subtitled as well.