More Fun to Say than to Play 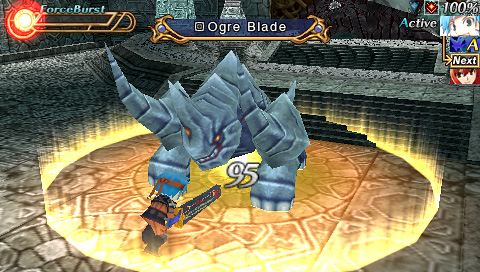 WTF Even with the game explicitly telling me that I could upgrade Ragnafacts, it took me two whole chapters to remember to do it.

Sting is an interesting developer. This is a studio that numbers their flagship series, Dept. Heaven, in order of originality in game design, rather than their sequential places in the story. Given that the first and least innovative of these is Riviera: The Promised Land—an RPG/dating/minigame/adventure—it's easy to see that the crew at Sting really like pushing boundaries. This pedigree makes the total lack of innovation in Hexyz Force a bitter pill to swallow.The game isn't technically part of the the Dept. Heaven series, so perhaps I'm judging it a bit too harshly, but even taken on its own Hexyz Force does little to set itself apart from dozens of RPGs that came before.

The battle system is a strictly turn-based affair. The only wrinkle is that each attack has a cooldown, with stronger attacks typically delaying a characters next turn longer than weak ones. Not exactly revolutionary stuff. Sting makes some small efforts to bring some spice to a mostly done-to-death system, but they're transparent disguises over things RPGs have been doing for years.

Ragnafacts—holy weapons that only the protagonists can use—and RP have taken the place of spells and MP. The other weapons, Spirifacts, work similarly to Ragnafacts, only they consume no RP and have limited uses before permanently breaking. The final methods of combat are Force Burst attacks, which are basically penalty-free super attacks that can be used once the Force Burst gauge fills. Fancy names aside, none of these are things that haven't been seen many, many times before.

The single, kinda-new feature that Hexyz Force brings to the table, the Hexyz Charge, falls completely flat due to thoughtless implementation. Every technique has one of three elemental affinities, and chaining together a series of attacks in the right way will increase the damage of the next attack. The problem is that enemies also benefit from the Hexyz Charge, meaning that if the party is stronger, so are the enemies. I ended up ignoring the Charge for most of the game because of this catch-22. Not utilizing the Hexyz Charge presented zero problems, largely because Hexyz Force has close to zero challenge. Embarrassingly, I forgot to upgrade any of my Ragnafacts for two entire chapters, and the only difficulty I encountered the entire time was staying awake. 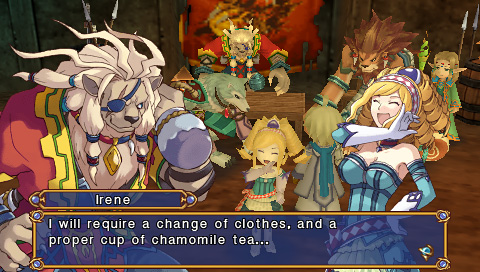 Staying awake is important, because Hexyz Force is not a short game. The narrative is split into the two stories of characters Cecilia and Levant, effectively doubling its length. These heroes mysteriously inherit Ragnafacts and are directed to restore balance to the world. Along the way they'll both pick up an entourage of similarly-destined buddies, travel to a lot of the same locations, and ultimately unite for the final push against the big bad.

Aside from the obvious intent of padding the game's length, splitting the tale into two seems like an odd choice. Regardless of which quest is chosen, the other party will pop in during critical moments and catch the player up on what's been happening. By the end of Levant's story I essentially knew the details of Cecilia's, which robbed me of any motivation to play her quest.

At this point Hexyz Force is probably sounding all bad, and I guess if one were reading the design docs rather than playing the game they could be forgiven for thinking so. Fortunately, there is something Hexyz Force gets right. Upgrading Ragnafacts (once I remembered to do so) had a sort of Pavlovian appeal, to the point that I found myself actively farming enemies to upgrade just one more level. Once I (finally) had four party members and a couple extra Ragnafacts, playing the game became almost compulsive, and I found myself eagerly returning to a game that was initially quite good as a sleep aid.

Unfortunately the game even trips up here by taking too long to bring new characters and Ragnafacts into the mix. Sting thought it would be a good idea to withhold the other five characters, along with the rest of the Ragnafacts, until the last dungeon. As compelling as it was, futzing around with the same three or four customizable weapons lost a lot of charm by the twentieth hour.

It's difficult to lavish praise on a game whose primary appeal is its ability to play upon my long-reinforced gamer conditioning. For those who thrive solely off of the thrills of putting points into stats and watching numbers go up, Hexyz Force leaves little to be desired. For the rest of us, Hexyz Force has equally little to offer. Rating: 5.0 out of 10.


Disclosures: This game was obtained via publisher and reviewed on the PSP. Approximately 22 hours of play was devoted to the single-player mode (not completed).

Parents: According to the ESRB, this game contains mild fantasy violence, mild language and suggestive themes. Aside from some cleavage and the errant "damn", there's actually not a lot to worry about in here. Kids who play should probably be out of of the single digit ages, but Teen seems excessive.

Deaf & Hard of Hearing: There are no significant auditory cues. The only problem I noticed is that the periodic animated cut-scenes, though rare, seemed to be unsubtitled. Very little major exposition is given during these scenes that isn't immediately reiterated through text though.

[quote=RandomRob]agreed… if a song, a movie, a story has a dismal first half, it’s not redeemed by a good second half. There is such a thing as respecting the audience. [/quote] Have to diagree here. There are a few high profile movies that have been exactly that for me. The Godfather, Fight Club and even Seven Samurai are all very slow starting films that are redeemed by the 2nd half to put them amongst the best movies ever made. Plus, The Usual Suspects just wouldn’t be the same film if you cut off just the last 5 minutes. But I… Read more »

I said ‘dismal’ not ‘slow’. I actually found the pacing of all the films you mentioned deliberate and in keeping with each of the narratives…

[quote=gamefreak666]The Godfather, Fight Club and even Seven Samurai are all very slow starting films that are redeemed by the 2nd half to put them amongst the best movies ever made.[/quote] Why do you equal ‘dismal’ with ‘slow’? Just because it seems normal these days that a movie has at least one murder victim or explosion within the first 120 seconds, doesn’t mean there’s any special quality in speed. The pacing has to be right, regardless of the speed of the narrative. I found the pacing in the first half of Fight Club, Usual Suspects, Garden State and others brilliant! The… Read more »

agreed… if a song, a movie, a story has a dismal first half, it’s not redeemed by a good second half. There is such a thing as respecting the audience.

Li-ion is right. 22 hours is more than time enough to suss out the fullness of a game’s mechanics for a review. If I missed out on anything by not completing the game, it was only additional cutscenes for a story that didn’t really spark my interest in the first place.

@Anonymous: he played for 22 hours. I think that’s long enough to say if it’s a good game or not. If it’s not good after 22(!) hours(!) it’s unlikely to get any better later on.

Huh, how can you review a game that you haven’t gone even halfway through, let alone the entire thing.