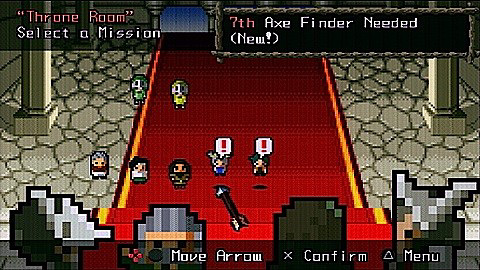 HIGH The final quest is a perfect realization of what Half-Minute Hero is all about.

LOW Any mode not titled Hero 30 seems dialed in.

WTF Did they have to reuse the catfish overlord so many times?

I knew I would buy Half-Minute Hero the moment I completed the demo. I wondered how anyone could pull off a 30 second rendition of such a famously indulgent genre, and in 30 seconds I had gotten my answer. I saw the JRPG perfectly executed in its most fundamental state. The grinding, the questing, and the sense of growth and achievement associated with the genre were all still present, minus the 40-hour time investment. The humor and retro presentation endeared me to the already refreshing game concept, so I, thoroughly charmed, set aside a Half-Minute Hero budget for when the game was released. I ceased to wonder whether I would like the game and instead eagerly looked forward to how much I would love it. Expectations do have a habit of getting away from me though, and if I took anything from my experience with Half-Minute Hero, it was that a JRPG is a JRPG, no matter how thinly sliced.

In his review, Brad outlines the problems that plague the JRPGs, and praises Half-Minute Hero for successfully avoiding the same pitfalls while at the same time lampooning them. I can echo the praise for the game's wittiness, but after turning the PSP off for the last time I was convinced that this bite-sized interpretation of the genre only minimized the flaws, rather than dispensed with them.

Perhaps the truest criticism that can be leveled at JRPGs is that they are repetitive. Random battles are the bane of many a player, and Half-Minute Hero attempts to solve this problem by shrinking the fights down to the point where the hero literally runs through disposable enemies in less than a second. Repetition still rears its ugly head here, though in a form that's less immediately recognizable. The quests of Hero 30 mostly consist of getting an important something—an item, weapon, or ally—leveling up a bit, and then taking on the boss. The names, locations, and reasons change, but the formula is set very early on and rarely deviates. The game is clearly made to be appreciated in small doses, but it turns out I could only appreciate it in small doses. Extended play sessions had me wishing for some more variety.

This isn't the only JRPG "tradition" that Half-Minute Hero holds to. The game is just too long for its own good. The aforementioned recurrent quest structure lost my interest about ten quests before the end of Hero 30, and then the game still required me to complete three other modes of the game before seeing the story's conclusion. I understand that Opus was being cute by having each mode be 30 quests long, but Hero 30 in particular has multiple questlines that put the total closer to 50. While I liked having the ability to branch out at first, I began to dread each new crossroads, knowing that my gamer's instinct would compel me to fully explore each of them for fear of missing out on some nifty new loot.

Of course, the holy trinity of JRPG tropes wouldn't be complete without filler, and while this is probably the least egregious of Half-Minute Hero's offenses, it is still present and accounted for. Each of the three modes that aren't Hero 30 could be accurately classified as filler. They're all quite short, enough that each one can be completed in a single session, but they feel like cheap Flash games. There is some entertainment to be had, but that bit of fun barely supports their duration.

I'm not trying to say that Half-Minute Hero is a bad game. I enjoyed it greatly for most of the time I spent with it, and even after the love had faded I was more restless than offended. The basic quest formula was more than adequate to support the bulk of the game, and there were a few occasions where the developers did play with it in some cool ways. One particular questline had the hero overcome by an unique condition that completely changed the way the quests played out. Another quest later in the game carried emotional weight that surprised me, given the constraints of Half-Minute Hero's design.

Half-Minute Hero is a fresh take on the genre, but it also suggests that even attempting to parody JRPGs enslaves one to their tropes. Like many other JRPGs, this is a good game that is weighed down by flaws that seem to be inherent to the genre. A reduction in scale isn't enough to solve these elemental problems; even the smallest details show clearly under a critical microscope. Rating: 7.0 out of 10.

Disclosures: This game was obtained via retail store and reviewed on the PSP. Approximately 12 hours of play was devoted to single-player modes (completed 1 times) and no time in multiplayer modes.

There are (i think) five modes, and each has 30 missions. You can beat each individual mission in 30 seconds, but if you have trouble you can ‘buy’ more time to extend the missions longer if you need. some missions took me a minute or 90 seconds, for example.

basically, it’s a little more than 150 brief missions, so including restarts, do-overs, exploring for items, etc… it can stretch out to a pretty good length for a portable.