Who Cares? Sega Should 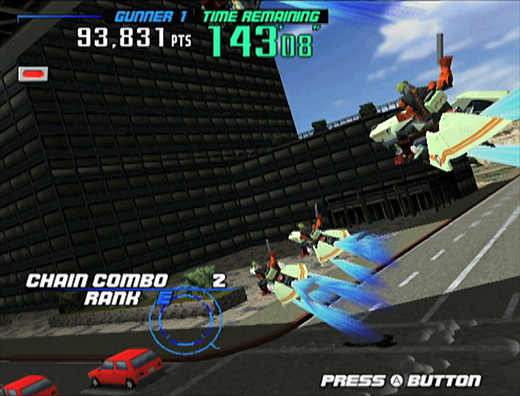 HIGH Transporting myself to a simpler, more poorly-rendered time and coming to the realization that Gunblade NY is actually pretty solid.

LOW Dozing off repeatedly during a run of L.A. Machineguns. For reference, the game is 30 minutes long.

WTF Wondering how to defeat all these robo-terrorists? Advise you slam 'em continuously!

The current console generation has demonstrated a healthy amount of reverence for its gaming forerunners. Every system has at least some legacy games ready for download on their respective online services, and there's an ever-growing number of classic compilations popping up on brick-and-mortar shelves. Without playing it, Gunblade NY & L.A. Machineguns seems like it might be another entry in this new trend. This is a serious misperception that can easily be corrected by popping the disc into the nearest Wii system.

If there's one thing notably absent from this re-release package, it's that reverence i mentioned. The low-rent menus and lack of…well, anything besides the two namesake shooters are anything but respectful. In fact, the presentation of this pack feels more appropriate for an unlabeled disc of dubious origin than an official, licensed product. It's pretty easy to imagine that someone at Sega noticed the code for these games on a drive gathering dust and decided to flip them onto a disc for some easy profit. Given its status as the de facto home of light-gun shooters, the Wii was a natural home for these forgotten "hits."

Even before it was released, the Wii was anticipated as a great platform for light-gun shooters, which is something I never fully understood. I get the underlying thought process: the Wiimote can be used as a pointer, and light-gun shooters require pointing as a necessity. What was problematic for me is that the light-gun shooter experience is uniquely reliant on the interface—holding a plastic gun instead of a joystick can make a big difference in enjoyment. While the Wiimote might be somewhat better than a d-pad for shooting onscreen baddies, it's still no plastic gun.

This is of particular concern for Gunblade NY and its sequel, L.A. Machineguns. Back when they were initially released to arcades, the plastic guns that accompanied these games were nothing less than huge, shoulder-steadied machines that shuddered with each virtual bullet that left the chamber. The only reason I ever touched L.A. Machineguns in an arcade was the irresistible siren song of those gargantuan guns; the actual quality of the game was secondary to the fact that I was practically hugging a fully-automatic, force-feedback cannon. The pathetic buzzing of a handheld Wiimote utterly fails at emulating that tactile thrill, and without it both games are left to stand solely on the wobbly virtues of their gameplay. 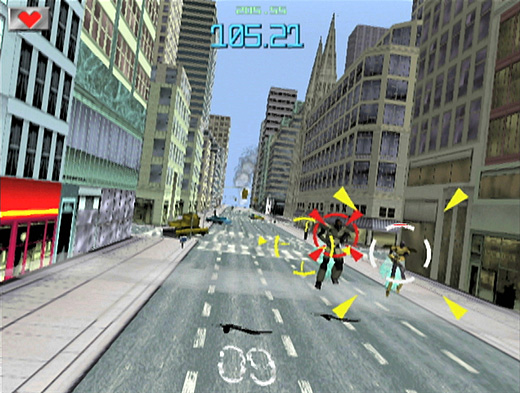 For Gunblade NY, this isn't the worst thing in the world. Once I got over the incredibly dated graphics and the absence of my beloved machineguns, I was pleasantly surprised to see the game still does something to set itself apart from the legions of also-rans that pollute the genre. While the player is ostensibly flying around in a machinegun-equipped helicopter, the majority of enemies are running around on foot. What's impressive is that rather than settling for the "shooting gallery" format so common to the genre, Gunblade NY forces players to actually engage with foes. The helicopter settles on each new threat and whirls around them until all of them have been neutralized. Meanwhile, enemies will roll away from incoming fire, dive for dropped weaponry, and stumble to the ground after taking too many hits. It's a small touch that adds a lot of dynamism to a stagnant genre. Considering its age, it's easy to say that Gunblade NY was ahead of its time.

L.A. Machineguns doesn't fare so well. While the gameplay is basically identical, Machineguns seems to lean more heavily on its now shrug-worthy graphical achievements. More time is devoted to blowing up giant robots and taking on airborne threats than to the lively ground battles that made its predecessor stand out. The "enhanced" graphics are also a lot muddier than the simple, barely-textured polygons of Gunblade NY. I frequently lost track of threats amidst all the visual noise and the entire affair—in its blocky, standard definition glory—gave me eyestrain, despite its brevity.

Speaking of which, this brevity is a problem for both titles. While an obvious virtue in the arcade, being able to blow through the two titles in the time it takes to make dinner leaves this pack—already budget priced—light on value. Only the hardest-bitten of score junkies would be able to keep this disc spinning longer than a couple evenings, and they've undoubtedly moved on to greener pastures in the decade plus since these games debuted.

What Gunblade NY & L.A. Machineguns desperately needs is context. Why are these two obscure shooters relevant to the HD generation? What influenced their creation, and where can their influence be seen today? Hell, a couple pictures of the cabinet artwork would be better than nothing. The fact of the matter is that neither Gunblade NY nor L.A. Machineguns—along with many other long-forgotten games—can hope to offer a compelling experience in the modern video game landscape. What they can do, with a little stewardship, is offer perspective on history, on development, on where games came from and where they might be headed.

In rudely flipping Gunblade NY & L.A. Machineguns onto store shelves for some quick cash, Sega has shown that they can't be bothered. If that's true, then why should anyone else? Rating: 4.0 out of 10.

Disclosures: This game was obtained via publisher and reviewed on the Wii. Approximately 2 hours of play was devoted to single-player modes (completed 5 times) and 3 hours of play in multiplayer modes.

Deaf & Hard of Hearing: There are no significant audio cues during gameplay. Between missions in L.A. Machineguns, new objectives are narrated to the player. This dialogue is also displayed onscreen, but it is tiny, green, and difficult to read. It's mostly fluff, but still worth a mention for those who enjoy that kind of thing.