It's Been a Long Time Coming 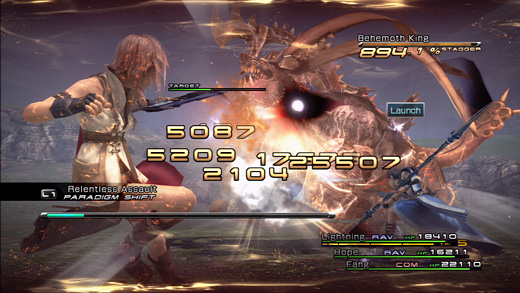 The writing's long been on the wall for Japanese role-playing games (JRPGs). What was once considered the hottest genre out there (thanks in no small part to the seventh game of this very series) is now regarded as stale and niche, with few worthy ideas to inform gaming as a whole. Square-Enix has finally acknowledged the pungent aroma of mustiness emanating from their raison d'être, and with Final Fantasy XIII demonstrates that they aren't above killing a genre in order to save it.

The traditional traversable overworld is gone, without even a static map in its place. The only shops are of the online variety, accessed from the world's plentiful save points. Towns have been reduced from destinations to superficial backdrops, and rather than interacting with the party, non-player characters simply ramble off a line or two as they pass within earshot. Most blasphemously, players are no longer simply directed to the next destination, but actively led along strict paths for the majority of the game's 50 hour length.

Those who define JRPGs by the empty space between the opening castle and the beginner's cave will consider Final Fantasy XIII a poor JRPG indeed, but declining mindshare suggests that this characterization is on its way to irrelevance. Here, Square-Enix redefines their genre, bringing an uncharacteristic sense of urgency and focus to a type of game which famously allows (and even encourages) players to save the world at their own leisure.

Regardless of genre, the holy grail for modern gaming has been to find the sweet spot between the advancement of player skills and the presentation of new challenges. Players should always feel as though they're learning and improving, but also know there are still greater challenges to be conquered. This push and pull frequently breaks down in JRPGs, where players are allowed to grind their way around difficult situations, and effortlessly bulldoze their way over fifty percent of the content. By drastically cutting the filler and introducing a tightly guided learning curve, Final Fantasy XIII has finally brought the series current with other modern genres. 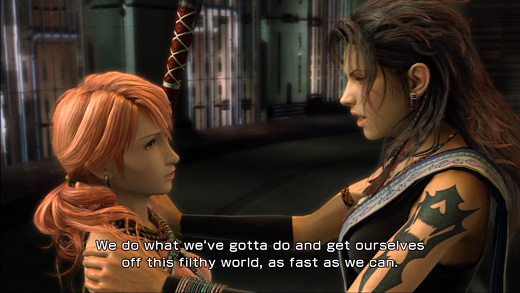 Rather than wandering environments polluted with random battles of same five enemies in four different formations, encounters have been tightly engineered to guide players along this curve. The party encounters two soldiers, then three, then two plus a healer, and so on. The only penalty for failure is a quick trip to the retry screen, driving home that learning—not grinding—is goal number one. In this way the game subtly pushes players toward understanding and mastery of a fairly complex battle system, without feeling bogged down or boring with redundant battles. Square-Enix keeps this curve steadily and reasonably rising through most of the quest's fifty hours, and that they have done so with scarcely a duplicate encounter is an incredible achievement.

Such attention to its learning curve would mean nothing if the game being learned wasn't worthwhile, so it's only appropriate that Final Fantasy XIII has the most entertaining battle system of any game in the series to date—elements from nearly every entry in the series are present here, but these familiar mechanics are made almost entirely unrecognizable by the way they come together.

Typically, the ATB gauge—a series trademark since the fourth installment—would have to fill before a character could act; now, particular actions require a certain number of segments of the gauge. A single attack can be initiated with only a partially full bar, while a series can be launched when the bar is full. Roles, too, are radically different than the jobs that have been with the series since its beginning. While they still govern what skills are available, their purview is more narrowly focused. Commandos do the heavy lifting of dealing damage, but each of the other five available roles have specific utility that is equally important. Medics handle healing duty, Sentinels hold enemy aggression and keep them away from weaker allies, Synergists bestow enhancements to the party, Saboteurs deliver debilitating statuses to foes, and Ravagers compliment Commandos by pushing enemies quickly to the stagger point, which greatly lowers their defense.

The limited foci of the various roles prevents any of them from being sufficient to conquer Final Fantasy XIII on their own. This is where the Paradigm Shift comes into play. Any time outside of battle, the player can set a deck of paradigms: preset configurations of roles for the active party. The player only has direct control of the leader, while the other characters will automatically act with surprising facility in whatever role is currently assigned to them. During battle, switching between paradigms is critical to victory. As the game progresses the challenges rise well beyond anything seen in a previous Final Fantasy; straight aggression quickly ceases to be a viable strategy, and the game literally dooms players who attempt turtling up behind Sentinels. Players are forced to set up a series of nuanced paradigms, and then switch decisively and quickly between them during battle if they have any hope of seeing the credits roll. 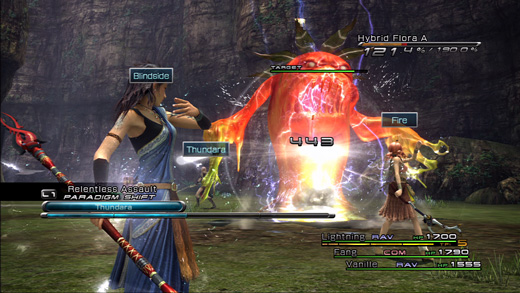 Final Fantasy XIII could have relied entirely on these newfound strengths, but it often doubts its own radicalism and withdraws to the safety of JRPG tropes, hitting snags in the process. By the time the final chapter is reached, the story has been told and mastery of the game's battle system is well in hand. Still, in grand JRPG tradition, Square sees fit to run the party through an endgame dungeon that  is high on tedium and low on fun. This superfluous final trial was filled with enemies that posed zero threat to my now-seasoned party, yet each encounter still took up to five minutes due to the enemies' absurd HP totals. This was the only point at which the gameplay tried my patience, and it felt like an archaic inclusion for fear of straying too far from the beaten path.

While the last dungeon is a particularly egregious example of this attitude, it's also the only time it manifests in a way that affects gameplay. The narrative, on the other hand, repeatedly falls victim to these kind of self-doubting retreats into tradition. In a story that is essentially a modified tale of man vs. nature, a cackling, evil pope-emperor is needlessly inserted to deliver rote exposition whenever the developers are unsure of how to motivate the party. During emotional scenes, the characters emote in melodramatic, overwrought ways, sabotaging perfectly empathetic situations. On top of that, many of these scenes are capped by mood-killing boss fights, with the game providing itself an in-world explanation for epic battles where none should logically exist. Each of these evidence storytelling anxiety on the part of Square. JRPGs typically tell players how to feel rather than allowing them to simply absorb the narrative, and it's clear that Square-Enix still has little confidence in the average person's ability to grasp a story without having it forced on them.

Final Fantasy XIII can—through the bifocal lenses of its triumphs and failures—be viewed as a denunciation of JRPGs as they have existed until now. The game's intermittent reliance on well-worn tropes highlights the necessity of the more forward thinking aspects of its design. By refocusing the scope of what a JRPG can be, Square-Enix has successfully granted the moribund genre a much needed infusion of relevance.  While it's not quite the final word on JRPGs, Final Fantasy XIII represents the felicitous first steps on the path to a destination well worth reaching. Rating: 8.0 out of 10.

Disclosures: This game was obtained via retail store and reviewed on the PS3. Approximately 55 hours of play was devoted to the single-player mode (completed 1 time).

Parents: According to the ESRB, this game contains mild language, suggestive themes, violence and is rated T for Teen. The occasional use of coarse language (never worse than "damn" or "hell") and the complexity of the battle systems are the main issues to keep in mind regarding young children, but also be aware that one character, Vanille, seems to have an orgasm during the animation for her Eidolon's final attack.

Deaf & Hard of Hearing: Final Fantasy XIII does a great job of always displaying relevant info on screen, as well as prioritizing the most important information in a visual way. There were zero occasions where I found myself relying on audio cues.

I am puzzled that this game gets high points for it’s battle system. It seems very boring to me, given that 99% of battle UI actions is trivial paradigm switching between 3-4 main paradigms, like if you low on health switch to war&peace. Where is fun in that? No, really, can somebody explain please?

Rant got the best of me…. I forgot to add something positive to my previous post, what I would lie to see in a a FF game is a mix of FF12 and Dragon age , as far as combat goes(maybe add in FFX customization from the start so no matter how badly equipment sucks you can tweak it some). Then tweak the RT combat to run based more off stats/situation than solely off the ATB bar. Now handle travel via 3 ways a magic transporter locations so you can get around easily, a spell and or spell scroll that… Read more »

FF13 is a travesty to the RPG gene its bad enough a more competent RPG Dragon age feels like half a game but good god FF13 is gimped down and simplified more than FFX was and with even more luke warm story and cast…. FF12 got it half right with the environments the rest was pretty much a loss, FF13 feels like a side project that was slapped together and had the FF brand placed on it just to up sales….I hope verses is the real FF game but I got this feeling both are side projects the clueless and… Read more »

No, I don’t think so, though I was never a big fan of Kingdom Hearts.

I will say that given that a lot of attacks (both from the player and the enemies) were AoE, I wouldn’t have minded some more control over positioning. I still suspect that I actually can influence where characters stand based on what commands are used, but that seems pretty subtle for a game that straight up tells you everything important.

Also, just for clarification, the Leona Lewis song is at the end of the game, not the beginning. Surprisingly appropriate too.

Strange I know, but Leona Lewis did the theme song to the English version of the game. 🙂

Also, I’d really like to know why a Leona Lewis CD is in the Amazon related links thing 😛

Question-do you think the game would have been better served by a more action oriented combat system a la Kingdom Hearts? I’m only about 6 hours in, but the overwhelming feeling I’m getting is that I should just be able to…do…more outside the confines of the battle system. The only thing I really don’t like so far is the feeling of not being in control of what’s happening.

I’m happy that this got a good review, considering this site doesn’t give many positive ones. This seems like a pretty cool game, too. :]

Wasn’t expecting such a positive response to this game; didn’t even know if you guys were going to review it! FFXIII certainly seems to have cut a line through Final Fantasy fans (similar to FFXII). I’m not actually leaning towards love or hate with this one; I enjoyed it sometimes, other times it bored me to no end. The story starts strong, but ends weak, while the end-game content pretty much revolves around killing an oversized turtle for 5+ hours (I can handle grinding, but that was brutal). FFX is still my best of the series. I’d probably rate FFXIII… Read more »