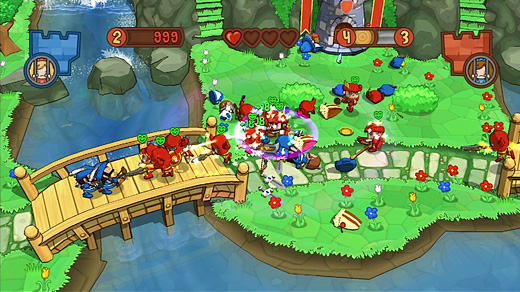 HIGH Holding both princesses for the last few seconds while the entire enemy team is running wild in the castle.

LOW The sudden realization that almost every match plays out the same way.

WTF The sudden realization that almost every match plays out the same way.

Around the time I heard the news of Fat Princess through the grapevine, I was really starving for a hearty downloadable PSN title. Sure there had been a few tasty morsels here and there, but none of them really satisfied my appetite. A mash-up of two popular multiplayer staples and a helping of pick up and play accessibility, with a dash of quirkiness for taste, Fat Princess seemed like it had just what it would take to satiate me. Since the initial announcement, I've been drooling over every screenshot and crumb of information that came out for the title.

While essentially a familiar multiplayer dish—team capture-the-flag—Titan Studios has attempted to impart their own unique flavor to the recipe via some noteworthy twists. Princesses are substituted for flags, and while they start out quite thin at first, there is plenty of delicious cake lying all over the battlefield with which to rectify that problem. The plumper a princess, the harder she is to kidnap. Aside from this gameplay quirk, players can also don different hats to switch between five classes—worker, warrior, priest, mage, and ranger—each with their own playstyle. There is a real-time strategy element present as well. The worker can collect resources to build and repair doors, bridges, and catapults to help aid in princess-pilfering, and can even upgrade each of the classes with new abilities.

The complementary flavors of class-based multiplayer mayhem and real-time strategy seemed like a match made in heaven, but it turns out that these are two great tastes that do not taste great together. While the basic red-on-blue carnage is acceptable, if unremarkable, the RTS aspects seem like a good idea that was never fully explored. After only a few games it became obvious that both teams would have their tech trees—more like tech stumps—maxed out not too long after the first few skirmishes. At that point, each match reverted back to vanilla team capture-the-flag, which really doesn't do enough by itself to set it apart from they typical CTF modes in countless other games.

The upsetting part is that it doesn't have to be this way. The basic ingredients for something delectable are here, but some significant developer oversights prevent the game from being something truly special. In a game where I am required to play on a team, I'd expect that an easy way to communicate and strategize would have been included from the word go, but outside of having a headset (purchased separately, of course) there was no other way for me to interact with my allies. A simple assortment of preset messages—think macros—could've went a long way to keeping the matches from devolving so quickly into chaos.

This isn't the only sour point though. The game automatically substitutes bots for any spot on a team not occupied by a human player, and every human player has the option to switch teams whenever the mood strikes them. The result of this combination is that in games that aren't completely filled, all players inevitably gravitate to one team, which results in boring bot beatdowns. Worse still was when the red team was filled and I was left as one or two humans on the ill-fated blue team.

There are a host of smaller issues, like how the oft-mentioned mechanic of fattening up your princess rarely plays any role in actual matches, or how quickly the same few maps wear out their welcome, but those are minor dings on a game that still has some bigger problems to contend with. There is potential here, and with an expansion or some downloadable content, Fat Princess can easily become something worthwhile, but right now it ends up feeling more like a proof-of-concept than a fully-featured release. Until Titan Studios addresses some of the game's fundamental problems, you can stick a fork in me, I'm done. Rating: 5.0 out of 10.

Disclosures: This game was obtained via retail store (PSN) and reviewed on the PS3. Approximately 2 hours of play was devoted to single-player modes (completed 1 time) and 10 hours of play in multiplayer modes.

Parents: According to the ESRB, this game contains blood and gore, cartoon violence, lyrics. Parents shouldn't be overly concerned. Any blood is quite cartoonish and inoffensive, and can be turned off in the options. The Lyrics refer to a song that only plays when you check out the game credits, but it's a song nearly everyone is familiar with (I won't ruin it, it's a pretty inspired choice) so I can't imagine it upsetting very many players..

Deaf & Hard of Hearing: You should tread lightly with this one. While the basic hacking and slashing doesn't rely too much on audio cues, if you're at all concerned with laying out some strategy, you're going to likely need a headset. In addition, the announcer that informs the player of changes in the battle is not subtitled, so hard of hearing gamers would have to be especially attentive to the HUD.

but I’ll say it again. I don’t hate Fat Princess. It was actually one of my most highly anticipated titles for quite some time, beating out a lot of full price games for my attention.

It’s because I wanted to like it so much that these flaws stood out so starkly. I still want to like the game, but Titan will have to do some work to convince me to give it another shot.

while i wholeheartedly disagree with your assessment. Not only do you raise valid points. You manage to do something most reviewers don’t you back them up. I can’t tell you how many times I’ve heard complaints about a game and no one suggests anything better. For instance while I personally disagree that communication is a /major/ problem (to be fair I have and often use a headset) I think the idea of macro phrases might be useful. I don’t know how long you’ve had the game but it’s my understanding that for instance the cake eating princess was rebalanced. There… Read more »