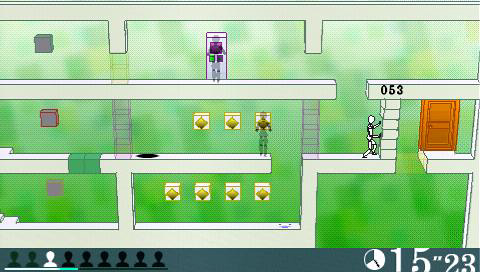 HIGH The same high for all puzzle games: the "a-ha!" moment.

LOW Having to redo the first four casts the same way just so I can reattempt the fifth one again and again is tiresome.

WTF Echochrome had a delicious fast-forward button. Where'd it go?

I wasn't the biggest fan of Echochrome. I was taken in by its striking minimalist look and the premise of Escher-inspired perspective puzzles, wherein what was true about the environment changed depending on the angle of the camera. Unfortunately the final product didn't really live up to the potential; pinpoint precision was required for even moderately difficult puzzles, and all the puzzle solving fun was quickly supplanted by frustration.

Rather than throw the baby out with the bathwater, someone (a smart someone!) realized that even if the core mechanics weren't worth repeating, the aesthetic was, and thus Echoshift was born.

Aside from sharing a genre and visual style with its predecessor, Echoshift is a completely different game. Artoon has dumped the fussy three-dimensional perspective gameplay of the first game and replaced with a much more enjoyable Time Bounce system. In a Time Bounce, players repeat the same thirty-to-sixty second time period for up to ten attempts (referred to as "casts") in an effort to reach the goal. The twist is that the shadows of previous casts repeat their actions in every subsequent attempt. As an example, I might spend my entire first cast standing on a button that creates a bridge. On the second round, I can cross the gap thanks to persistent actions of my initial attempt.

Holding switches to build bridges on every stage would make for a pretty pathetic puzzler, and Echoshift thankfully gets much more complex than that. Springs, holes, timed doors, moving platforms and heat-seeking mines all get thrown into the mix, and that's only a partial list. Echoshift does a great job of varying the theme for each of its 56 stages, and an even greater job of presenting its challenge in an approachable way.

One of the biggest weaknesses of the puzzle genre is the potential for players to hit an honest-to-goodness brick wall. The idea of progressing normally through a game only to be hopelessly roadblocked holds zero appeal to me, which is why I typically steer clear of the puzzle genre. Echoshift deftly avoids this problem with a some thoughtful design choices. 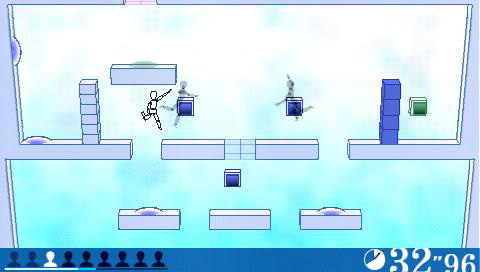 Stages are organized into eight tiers of seven. Each tier deals with a theme, such as vertical structure or darkened stages, and the stages ascend in difficulty along their respective tiers. What's nice about this setup is that it never feels like Echoshift is building to some unspeakably horrific puzzle at the end. Each tier is a complete difficulty curve on its own with none being remarkably more difficult than any other. After completing the first stage of a tier players are allowed to jump across to another, making a user-friendly structure even friendlier.

When it comes down to individual stages, Echoshift is just as accommodating. As I mentioned, each stage must be completed within ten casts. The beauty here is that no stage requires more than five. While the game grades performance—three stars for a target amount of casts, two for exceeding that target by one, and one for going beyond that—simply completing a stage within ten casts will always unlock further stages. There is no reason to aim for three-star ratings other than personal satisfaction. This accommodation extends in both directions; three-starring each stage is no mean feat and there are also key (where a key must be found before the goal is opened) and time trial versions of every stage.

At this point Echoshift is probably sounding like the perfect puzzler, but it falls a little bit short. The aesthetic of Echochrome has lost something in transition. Visually interesting level designs were an integral part of 'chrome, and that trait is sorely missed in Echoshift. Aside from palette swaps between tiers, the stages of do little to distinguish themselves visually, and I found myself putting the game down a few times just because it all started to blur together and lose my interest. Aurally, some sound effects are grating and overly loud, with the grinding of moving platforms being a particular annoyance.

The most obnoxious aspect of Echoshift is how interface-y it is. The menus are mostly spartan, but the game stumbles where it counts most. Moving from the current cast to the next requires the player to pause the game, select next cast (unwisely located directly above "retry") and then select yes or no to confirm. A visual representation of moving to the next cast follows, with a prompt to press X again to get started. Doing this once is simple, but repeating this dance hundreds of times over the course of play—accidentally retrying stages more than once in the process—is a problem. There's no reason such a central game function couldn't fit on one of the system's many unused buttons.

These flaws are easy to forgive in light of the game's unique strengths. Puzzle games are the sadists of the digital world, and all too often the only reward for victory is greater pain. Alone among its kind, this game accepts players as they are. Always challenging but never impossible, Echoshift goes out of its way to cater to the player in ways that very few titles do, making it an easy game to love. Rating: 8.0 out of 10.


Disclosures: This game was obtained via paid download and reviewed on the PSP. Approximately 8 hours of play was devoted to single-player modes (completed 1 time).

Parents: According to the ESRB, this game is rated E for Everyone and contains no descriptors. That's right, watching a mannequin push buttons and walk through doors is completely unobjectionable. who knew?

Deaf & Hard of Hearing: An un-subtitled voice acknowledges various changes in the game state (changing casts, finishing a stage etc.) but the changes are obvious and audio in general is completely unnecessary to play the game.