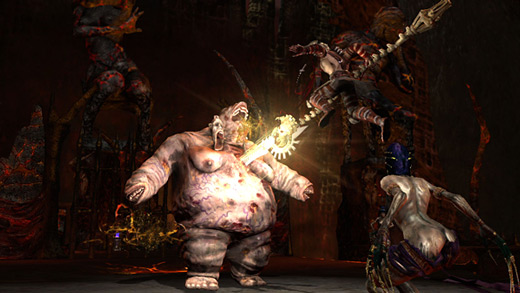 LOW It's still not even worth the HD space it's written on.

WTF So Dante fought his fiercest foes before he even stepped foot into Hell?

After meh-ing through Dante's Inferno, I briefly entertained the idea of trading it in towards a game I might feel less embarrassed about having on my shelf. Keeping me from this was a little slip of paper that came in the case: a code promising free prologue DLC in the beginning of March. There was a pretty big gap between when Dante killed Death and arrived back home, and I imagine something must've gone down besides him taking up an interest in cross-stitching. Well it's March now, but this DLC doesn't do anything to fill that gap in.

This DLC covers Dante's journey home through a forest and…well there is no and. That's it. He's kind of half-heartedly pursuing the guy who will eventually murder his wife, but nothing really happens on that front either. After catching up to him, he lets him go because we have to have some kinda catalyst to get this plot rolling, right? Oops, spoilers.

The only thing this DLC accomplishes is ruining the decent gameplay that was the Inferno's only saving grace. While the main game became more fun as Dante escalated in power, The Dark Forest craps all over this by making all of the enemies way more durable than anything he encountered in Hell itself. All of the moves learned previously are immediately available, so it was a just a matter of spamming my most powerful attacks over and over (and over) until all creatures were dead and all things were broken.

There's nothing new to see, no new techniques to learn, no new enemies to fight, and no reason to download this, especially if your copy didn't come with the free code (360 owners, beware).

Normally I'd question the wisdom of releasing a bit of DLC (and it is a bit, only about 20 minutes long) that firmly establishes your game as inferior to pretty much anything else coming out this season, but I already spent a whole review questioning Visceral's wisdom. Now is the time for acceptance. If anything good came out of this DLC, it was that I can now pitch this game across the counter of my nearest game store while it's still worth something. Rating: 2.0 out of 10.

Disclosures: This game was obtained via free download and reviewed on the PS3. Approximately 0.25 hours of play was devoted to single-player modes (completed 1 time).

Parents: According to the ESRB, this game contains blood and gore, intense violence, nudity, and sexual content, and received a rating of M for Mature. The ESRB ain't kiddin' here folks. Keep your kids far away from this one.

Deaf & Hard of Hearing: There are no significant auditory cues. All important information is clearly displayed onscreen. Hard of hearing gamers should have no problems.