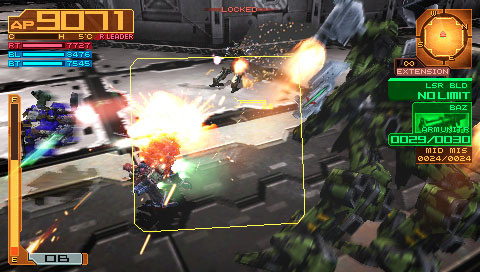 LOW Being sliced apart by beam swords for relying too heavily on my trusty flamethrower.

WTF The game has more functions than the system has buttons!

I've long known that From Software, developer of the deliciously grim King's Field series, was behind the mech-sim series Armored Core, but it wasn't until they released the amazing Demon's Souls that I formed an interest in venturing outside of their swords-and-sorcery catalog. It seems like the release of Armored Core 3 Portable to the PlayStation Network store—all pretty and budget-priced and everything—was specifically chosen to take advantage of my newfound curiosity, and it worked.

Given that Armored Core 3 was originally released on the PlayStation 2 and designed entirely to be a console experience, I was surprised at how, well, portable the game turned out. I'm not exaggerating when I say that Armored Core 3 Portable has been the most fulfilling experience I've had on my PlayStation Portable to date. The concept of the game is quite simple. The player takes the role of Raven—defined in the dictionary as a dude with a big ol' robot—who does freelance missions for three competing mega-corporations and uses the cash from successful operations to further customize his or her Armored Core (AC)—said big ol' robot. Depending on the assignments taken, the influence of the various corporations fluctuates, affecting prices in the store and availability of various parts. Missions are seldom offered more than once, meaning if the player accepts mission A, then they forever give up the opportunity to try missions B and C. There is also an arena that exists alongside the regular mission mode where the player can pit his or her AC in one-on-one battles against AI controlled ACs for even more cash money millions.

The single most impressive aspect of the game is how well all of this works on the PSP. I completed the entire game in a series of 30-minute bursts of play (Armored Core 3 for lunch AGAIN?) and never felt like I hadn't accomplished something. Missions rarely last longer than 5 minutes and the majority of my time was spent obsessively tinkering with my AC. The pick-up-and-play nature of the game in no way takes away from the fact that the game still has some serious meat on its bones. After 12 hours of gameplay, my clear file helpfully informed me that I had only witnessed 45% of the content.

I will admit that there a few times I "forgot what time I clocked out" and found myself slinking back into work a little late, but that had little to do with mission length and a lot to do with mission variety. I'd start the next mission, just to see what it would be like, and then finding myself unable to turn the system off and get back to work. Despite the fact that I had spent a dozen hours on so many bite-sized assignments, I could probably count on one hand the amount of times that my objective was to destroy all enemies. More often I was protecting targets, retrieving data or attacking corporate headquarters. In one mission my job was simply to let some guys shoot at me until they got the data they needed. At least they said data. To me it felt more like I was being paid to star in a robot snuff film. Which I guess is Armored Core in a nutshell, come to think of it.

Aside from a reputation for being one the only robot porn games in town, Armored Core has earned another, less flattering flattering distinction: complex controls. The series frequently receives criticism for its awkward controls, and the situation is not alleviated when it's crammed down onto a platform that has two less buttons and one less analog stick. From Software had the presence of mind to include fully customizable controls, right down to assigning independent functions to the different directions of the analog nub, but even with some fiddling they never felt right. As a matter of fact, I completely gave up on trying to find a practical arrangement for the look up/look down functions and instead relied on equipping my AC with the largest lock-on range possible. While this served me through the entire game, it was definitely a duct-tape solution, and there were several occasions where I found myself really wishing for about sixteen more buttons on my PSP.

Despite the fact that the controls were a pretty major hurdle to my enjoyment of the game, it is a solitary shortcoming on what is otherwise a perfect example of a PSP game done right, and one that I willingly accept in the face of all of the accompanying strengths. A port of a six-year-old PS2 title might not fit the profile of a platform defining title, and it might be more than a little ironic, but the fact that the game manages to accomplish this so far out from its initial release is a testament to its quality. Rating: 8.5 out of 10.


Disclosures: This game was obtained via retail download and reviewed on the PSP. Approximately 12 hours of play was devoted to single-player modes (completed 1 time).

Parents: According to the ESRB, this game contains violence and is rated T for Teen. The violence is all sanitized robot-on-robot 'splosions, but the game does take place in a depressing future where guns-for-hire work for soulless corporations often with civilian casualties involved.

Deaf & Hard of Hearing: Any significant auditory cues are accompanied by visual ones, and I found the visual cues to be frequently more reliable than the auditory ones. Also all in-game text is subtitled.

The controls of Mechwarrior 2 worked best as combination of joystick (with throttle) and mouse (IIRC). Where the joystick would be for movement of the feet and the mouse for moving the torso. Something that could be done with 2 analogue sticks. Since the mechs couldn’t sidestep (unless you had jumpjets) it was vital to be able to walk in one direction while looking the other without getting confused. Most buttons on the joystick were for the targeting system, while the mousebuttons were for weapon controls (button 1 fire single weapon or fire weapon group, button 2 cycle through weapons).… Read more »

I can’t comment on the complexity of mechwarrior, having never played any of those titles, but I can say that the gameplay here is pretty accessible. Regarding weapons: you have a right hand weapon, usually close range, assigned to one button. Then all of your other weapons, which are long range, share the same button, and you have to switch between them. Maneuvering is handled in typical third-person fashion, with the analog nub doing all the hard work. There’s also a boost ability, for quick dodging and things like that. Outside of combat there are a ton of stats to… Read more »

How complex is the gameplay of the Armored Core series compared to the old Mechwarrior (especially Mechwarrior 2) games on the PC?