Zebra has Acquired a Nuclear Missile 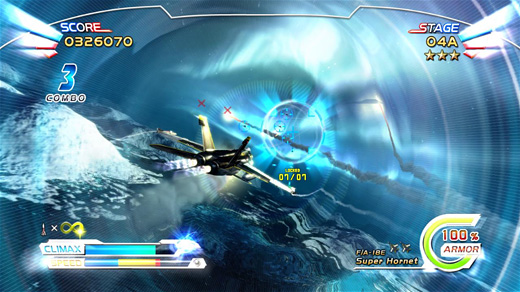 LOW Being unable to pick apart the visual chaos for my first X attempts at the game.

As a huge fan of Sega's ancient, bizarre arcade shooter, Space Harrier, I've always had an interest in the After Burner series. The gameplay is fairly similar between the titles, with the main difference being that After Burner replaces the one-eyed elephants and flying mushrooms of Space Harrier with sensible real life objects, like planes and…more planes.

Unfortunately, I was never able to really enjoy the original After Burner titles. Despite my enthusiasm for the underlying gameplay, I found myself stymied by a kind of visual incoherence in the titles. All of the planes and missiles and explosions blurred together for me, to the point where I felt as though I was staring at the game over screen as often as any actual stage. These failures, miserable though they were, made me wish for a modern take on the series, hoping that a graphical facelift would allow me to make sense of the onscreen chaos. Well, it's taken until 2010 but Sega has delivered exactly that.

After Burner Climax can be accurately described as the least realistic flight simulator ever made. The authentic look of the jets featured in the game is probably the closest flirtation the game ever makes with reality; these planes can also magically replenish their own ammunition, slow down time, and destroy entire armies unassisted. Players man the yoke of one of these magical jets and screech non-stop through twelve stages of airborne combat. Missiles are the primary means of player-enemy interaction, but there's also a nose-mounted machine gun for nearby threats. Special directives spice things up a bit by introducing optional missions during some stages, but aside from that it's not much more than a headfirst charge into the heart of enemy territory.

My first impressions of Climax were worryingly reminiscent of the time I had spent with its predecessors. The jet felt too fast, the targeting reticle too small, and enemy missiles too accurate for me to do much of anything before being blown out of the sky. As it turns out, After Burner Climax is just hard—appropriate for what was originally an arcade title—and thanks to the introduction of fancy new graphics technology (like 3D!) I was finally able to tell heads from tails, and felt my skills inching slowly upwards. At this point, I was relieved to discover that After Burner is as fun as I had suspected all along, and taking out twenty bogeys with a single use of the Climax meter (the game's bullet-time mechanic) never failed to satisfy.

As fun as it is, a straight port of After Burner Climax would have limited appeal in the console scene. Arcade titles are generally designed around devouring every quarter in a twenty mile radius, and After Burner Climax is no exception. It's an unforgiving game that possesses a small-and-shrinking margin of error, and any deviations from that range are met with extreme prejudice. Should any player be audacious enough to actually conquer the beast, they are treated to a microscopic epilogue, a prompt to enter their initials, and then shuffled off to the game over screen anyway, a sign to get up already and let the next hapless victim feed the machine. The console environment is a slower paced world, where all the costs of gaming are paid up front, and players are allowed to enjoy the game on their own terms.

Sega wisely recognized this fact, and the addition of the EX mode goes a long way to bridging that divide. Essentially a menu of unlockable options, the EX mode allows players to fine tune their After Burner experience with surprising granularity. If a player chose to turn off enemy fire and blaze through the game with infinite missiles and automatic lock-on, they can do that (I know I did), but more significantly, players can adjust individual parameters to compensate for their own shortcomings.  To the relief of arcade junkies everywhere, any scores attained using EX mode remain safely on the system on which they were achieved. The only way to upload scores to online leaderboards is through the appropriately named Score Attack mode, where EX mode options hold no power.

Publishers interested in bringing arcade titles to the console market should be taking notes here. After Burner Climax is as close as it gets to getting the full experience short of stepping into a specialized arcade cabinet, and the EX mode gives legs to what would otherwise be a incredibly short play time. At ten dollars, fans of high-pitched arcade thrills will probably feel like thieves. Rating: 9.0 out of 10.

Disclosures: This game was obtained via paid download and reviewed on the PS3. Approximately 5 hours of play was devoted to single-player modes (completed 10+ times).

Parents: According to the ESRB, this game contains violence. The violence referred to here is nothing more then lots and lots of bloodless explosions. The Sega blue skies are safe for the young ones.

Deaf & Hard of Hearing: The only significant audio cue is a sound that plays for each successful lock-on. While the locks are displayed on screen, the indicators are small and the action is hectic, so I found myself relying almost exclusively on that sound to prevent myself from wasting too many missiles (they constantly replenish, but the default rate is slow). Hard of hearing gamers would probably have to be particularly vigilant about this.

Absolutely LOVE this game. So much fun. A for the stealth bomber special order enter climax mode for as little time as possible by tapping RB then hold down the speed up button and when you exit climax mode you hit 100% speed (so long as you’re holding the speed button when exiting) allowing you to get up close if you fall behind by dying or slowing down to dodge missiles and destroy enemies.