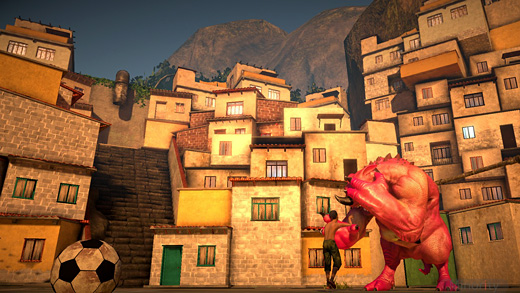 Now that E3 is a few weeks cold, I'd like to write a little about my personal game of the show, and the man behind it, Vander Caballero, who is inextricable from his pet project. I didn't go into the convention thinking about winners and losers, but Minority Inc.'s Papo & Yo was a definite winner for me, one that has stayed on my mind continuously since the show's end.

Papo & Yo is a PlayStation Network exclusive set for an early 2012 release. Early trailers suggest that the title has all the right ingredients to become gaming's next downloadable darling: a spindly young boy hero, a fantastical landscape, and heartwarming interactions between the protagonist and his over-sized pet/companion. Papo & Yo's charms are deceiving, and those expecting a playable version of Disney's Pete's Dragon are in for a rude awakening.

In my first moments with Papo & Yo I was struck by its visuals. Quico, the boy hero, looks like a real boy, and the area covered by the demo evoked the imagery of real favelas, the terraced shanty towns stacked high and deep next to Brazil's largest cities. However it wasn't long before Quico began issuing orders to his autonomous toy robot attendant, Lula, creating matter from chalk scribbles, and moving entire houses by picking up cardboard boxes. The world of Papo & Yo is one that is highly subject to the whims of imagination. In game with a more abstract style such events evoke a sense of levity and playfulness. When placed into the context of realism, these flights of fancy take on a different character. Believable landscapes imbue Papo & Yo's implausible events with a sense of importance; their presence in a real—at least seemingly—world implies real relevance.

This was doubtlessly a calculated decision on the part of Vander Caballero, Creative Director of Minority Inc., who aims to tell a serious tale through the thematically light-hearted medium of video games. By the end of the demo, Quico had met up with Monster, a massive pink rhino beast, and it is the dynamic of these two that make up the central conflict of the game. Monster is as friendly as a giant pink rhino can be until he eats one of his beloved poison frogs. He then becomes a raging force of nature from which Quico himself is not safe. Quico's goal is to find a way to cure his monstrous friend.

Any analog to the real life relationships between substance abusers and their loved ones are intentional. With Papo & Yo, Caballero wanted to share the story of his own childhood, growing up with a father who wrestled with drugs and alcohol. My own father is a recovering alcoholic, and this story resonated with me instantly.

The father-son dynamic of Papo & Yo has been well emphasized; the title, when translated, flatly declares that the game is about "dad & me". The roles of the two main characters, Quico and Monster, have been well established, but the third leg of the the star trio—the flying robot Lula—had been scarcely acknowledged throughout the demo or any of the promotional materials. Considering how close the director was to this project, I couldn't accept that this electronic companion was a cynical concession to playability. Thankfully, Vander Caballero himself was able to shed some light on her role in the game.

Lula represents toys and technology, a familiar protector to anyone who has grown up with substance abusers in the household. As Vander put it, toys and video games provided his young self with an escape from "Dad World" to a place where he was in full control. In this way, technology was a very real protector, and this can be seen in Lula's own abilities. She is Quico's unquestioning assistant, with abilities that exceed his own. Her flight grants allows her to help Quico accomplish tasks that would be impossible for the boy alone. She obeys him, and in doing so empowers him. Indeed, Papo & Yo invites players to take the metaphor even further. Monster actually fears Lula, as if to illustrate the way an abusive father fears losing a son to the toys and games he increasingly hides behind.

When I spoke with Caballero, I took the opportunity to talk to him about more than just the role of the toy robot in his upcoming video game, and I used Papo & Yo's graphics as a starting point. It's not quite AAA, but it is far better than what I've come to expect from the average PSN exclusive. If the presenter had told me this was a full retail game, I would have been convinced based on the visuals alone. I was curious how, as a downloadable title, Papo & Yo achieved such a high level of graphical polish. 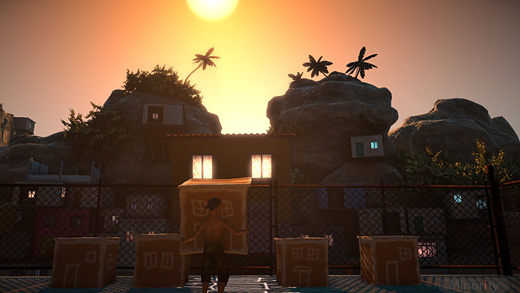 The answer was simple enough. Vander and the team at Minority are comprised of ex-AAA employees who have worked on projects like Army of Two (for which Caballero himself was Design Director), Tom Clancy's Splinter Cell, and Assassin's Creed. They brought their familiarity with the hardware with them when they left, and Papo & Yo benefits from that expertise.

Vander followed this with an intriguing prediction: downloadable games will continue to look better when—not if—more individuals with AAA experience move into the independent sphere. As independent game development becomes more mainstream and accessible, big studio employees are feeling dissatisfied with their bit roles in giant productions that they feel creatively detached from.

Vander's answer to my second question—why weren't more personal stories being told through the medium of video games?—was surprisingly intertwined with the prediction that was prompted by my first. In order to tell new stories in games, one must invent new ways to play games, which isn't easy. Having said that, Vander suggested that those same dissatisfied employees at the big developers are coming up with these ideas right now, and their eventual exodus will bring not only new technical standards to the independent arena, but new kinds of stories too.

When asked about his influences, Caballero immediately cited Fumito Ueda's ICO, lamenting that it has been ten years since and there hasn't yet been a title to achieve the same level of emotional resonance. It's interesting, then, to note the parallels between Caballero's Papo & Yo and Ueda's upcoming The Last Guardian, which also stars a boy and his beast. From the perspective of new kinds of stories, it is Caballero's project that seems to be the more ambitious of the two. Gamers have already had plenty of chances to attach to in-game animals, from Fallout's Dogmeat to Shadow of the Colossus's loyal steed, Agro. We have rarely been challenged to look into the faces—both good and evil—of our own family.

The demo of Papo & Yo was admittedly quite limited. The game was in a early stage, and I didn't even get to witness much interaction between Quico and Monster, nevermind Monster's allegedly frightening transformation. Even so, Vander Caballero's passion for the subject matter was infectious, and his intimacy with it, reassuring. Optimism pervades Minority's maiden project: Quico's hope that he can heal his beloved Monster and Caballero's desire to realize the unfulfilled promise of one of gaming's most revered titles. It seems only appropriate that such idealism should be repaid in kind, and in that spirit my fingers are crossed for Papo & Yo's eventual success.