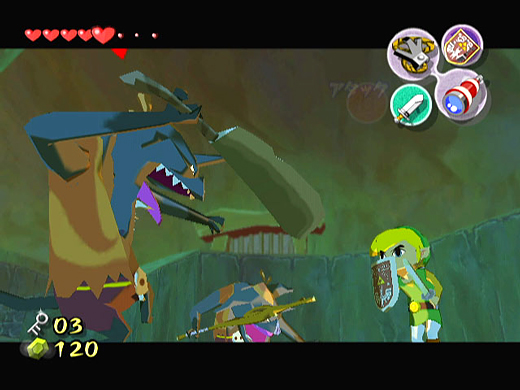 Meet the new Zelda, same as the old Zelda.

Well, it sure doesn't look that way at first, does it? To be blunt, the aesthetics of The Legend of Zelda: The Wind Waker are awe-inspiring. The decision to go with a cel-shaded style was widely and roundly derided by a videogame community increasingly enamored of 'realistic' graphics, but it winds up making this title truly special. The cel-shading is not only visually pleasing, but legitimately useful in terms of connecting players to the game. By using an overly-exaggerated, almost expressionist cartoon style, Wind Waker creates a world of characters who display an incredible range of emotions in real-time. The iconic nature of the characters not only makes it easier to display various emotions, but enables the player to place themselves within the game. The other notable aspect of the graphics and other aesthetics is how well they work together to create a compelling world. The art style manages not only to be unique, but references the previous games in the series at the same time. Music in Wind Waker does the same, working in older themes and original work with incredible dexterity, creating a sound that is both fresh and familiar. Dialogue in the game is also surprisingly humorous and deft, a welcome surprise compared to most of the plodding, wooden writing usually seen in videogames. All of these aesthetic aspects combine together to complement each other, creating a distinctly unique world that is still recognizable as a Zelda game, a remarkable feat to be certain.

In terms of design, Wind Waker continues the Zelda tradition of relying on the curiosity of the player to drive forward progress in the game. In a way, the oceanic overworld acts both as a gameplay mechanic and as a convenient metaphor for the dominant design trait in the Zelda series. This trait is to set up the gameworld as an open expanse for the player to explore, rather than forcing the player to go through a prescribed path or cutting up the game into discrete levels. By doing so, the designers allow the player to explore the world at their leisure, relying on the innate curiosity of the player rather than leading them by the nose.

When we examine just the narrative of Wind Waker, we can see that there are many parallels between this game and the others in the series, especially the two games that introduced the series to the SNES and the Nintendo 64, A Link to the Past and Ocarina of Time. However, there is at least one significant difference here. That difference is that Wind Waker provides some backstory to the Zelda mythology. It is the first time that a Zelda game has given us a fairly in-depth look into the mythology of the games, and it goes a long way towards providing us with a deeper experience, as the mythology not only provides additional framework for the plot, but for some of the main characters, allowing the player a deeper relationship with the figures on the screen.

The beauty of Wind Waker is that we have essentially played it before. Like most games in the Zelda series, Wind Waker makes great use of a shared plot and mythology, to the point where it could be legitimately claimed that most Zelda games are a series of interpretations of a single game. Why would a game that we are already intimately familiar be so exceptional? Part of the reason that Wind Waker and the series in general have been so successful is the very familiarity that gamers have with the Zelda games. 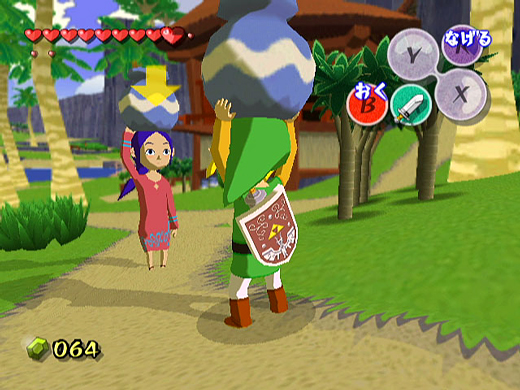 It's no accident that the two Zelda games that have received the least praise, Zelda 2: The Adventure of Link and Majora's Mask, are the two games that deviate most from the Zelda tradition. The Adventure of Link deviated in terms of gameplay, adding side-scrolling elements and bifurcating the overworld into two modes. Majora's Mask was a unique entry in terms of narrative, eschewing the standard setting and plot of the Zelda series. It is interesting to note that even though the two changes of direction were different in nature; both games were castigated on a fairly equal basis. What this means is that the Zelda series is defined by a combination of elements, not any single one element, and that deviation from this expected combination is 'bad', regardless of the quality of said changes. People have said 'Well, I don't want to play the new Zelda game if it doesn't have X in it' without having played the game, feeling ready to give a value judgment based entirely on the lack of a certain character(s). Why is there such devotion to the game, and more specifically, the game's mythology?

Various factors make Zelda games so powerful and compelling. Firstly, the series of games maintains a common theme that speaks to our instincts in terms of stories. The Zelda myths, and other Campbellian narratives, appeal to us because they deal with known quantities, that being the triumph of Good over Evil, through the form of the plucky hero who overcomes great obstacles to gain godlike power. The games, like stories told around the campfire, tell a single basic story changing over time, evolving stylistically to remain entertaining while still giving the audience the expected thrills of the familiar tale. As a game, the Zelda series is much larger than a narrative, and it works precisely because it manages to apply the same sort of stylistic incremental change to all of its aspects, not just its narrative. Gameplay, visual aspects, game design, all of these have maintained a certain similarity throughout the series, even as they have changed as well.

Like the hero myth evolving over time, the Zelda games have evolved not only their visual styles, but the dimensions that they are presented in, the nature of the gameplay and how the worlds are designed. Aside from the change itself, the other important point about Wind Waker and the other Zelda games is that they have always received the highest level of craftsmanship available during their respective eras. The combination of an incrementally evolving basic theme with exceptional workmanship means that the Zelda games have remained standard-bearers for quality in videogames, and Wind Waker is no exception.

The only real down note played by Wind Waker is the disappointing relegation of a major female character to the role of a victim for a substantial period of the game. Although there are many female characters in the game, it is disappointing to see the most promising and vibrant of these characters robbed of her role and put on the proverbial back-burner. Although this is disturbing and should have been avoided, it is not enough to spoil the experience of the game. The Legend of Zelda: The Wind Waker marks the ultimate refinement of the themes that make up the Zelda series of games. The only significant flaw in the game, aside from the aforementioned treatment of a main character, is that like all great works, it feels like the game ends just a little too soon. This is the finest game in the series to date, and with that comes a certain amount of sadness when the experience is over. This game is rated 10 out of 10.