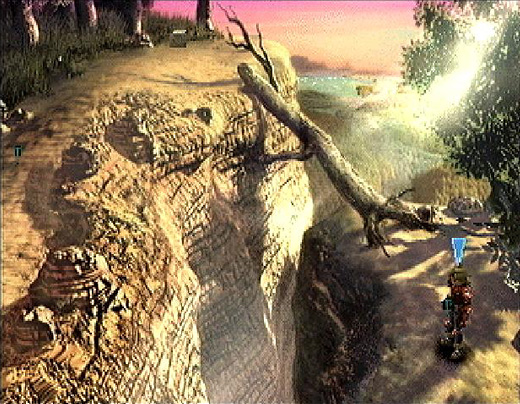 After reading through Ben's review I have to say that I couldn't have said it better myself. I believe Ben made all the points I would have wanted to make about the similarities between Sony's and Squaresoft's respective milestones, as well as the flaws inherent to Sony's creation. I am in total agreement as far as the annoying random battles made even more annoying since that gaming convention is being phased out by modern RPG developers. Like Ben, I was irked by such time wasters as the screen bleeding that announced an ensuing battle as well as the camera that took its time panning around the battlefield before and after every single battle. And I also grew weary of the voices used in the full-motion video sequences. If ever there were a time to copy Squaresoft—who shy away from using voice dubbing—that was it.

Unlike Ben, I happened to like the "Additions" system. It seems pretty apparent to me that RPGs could use a few touches of interactivity during battles. Case in point, is one of my all-time favorite RPGs, Final Fantasy III, which went so far as to incorporate Street Fighter II-esque moves into the action. In my opinion, Additions were just the ticket to break up the inevitable wait time and monotony associated with attack animations in modern RPGs. What I did not like was the same principle being applied to spell casting. Having to press a button that ferociously and often during every battle throughout the game should have sent up red flags from the get go. Then again, after learning of Ben's unfortunate Dual Shock controller situation, perhaps Legend of Dragoon was an ingenious way to make tons of cash through sales of a landmark RPG and Dual Shock controllers.

Usually when I come across a game that copies an originator as blatantly as Sony's Legend of Dragoon does Squaresoft's Final Fantasy VII I go after the game and lambaste the developer and publisher alike for lacking integrity, creativity and respect for gamers. However, in the case of Legend of Dragoon, with its extraordinarily high-quality full-motion video sequences and computer-generated art, solid gameplay elements and (barely) above average story, I can't help but feel bad. I genuinely liked the game and believe it could have earned a higher rating had Sony created a more original set of characters, stronger storyline and lost many of the clearly Final Fantasy VII inspired themes. As is, hindsight is 20/20, and the fact of the matter is that this was just a wasted opportunity on Sony's part. Rating: 6.0 out of 10.

Dale, I agree with two (sort of three) of your assessments. So, I think you managed a little more diversity than Ben and his review. FMV VA – It is cheesy and there is no denying the fact that it is cheesy. Additions – They were a great idea that really breathed some life into the turn-based setup. Personally, I do not understand how Ben gleaned Final Fantasy 7’s Limit Breaks from this system. I’ve finished both games myself. Magic – I cannot say I was *that* bothered by the leveling mechanic, but yes, I can see how it can… Read more »

I don’t think either critique does the game any justice and it hasn’t been given a fair judgement at all. I’ve played countless RPGs over the years, and I fail to see the similarities you place between LoD and FFVII. Most games, books and films follow the age old good versus evil plotline where the main villain is hell bent on either destroying the world or usurping control over it. I honestly think LoD is a lot more original that you give it credit for. So, the main character has a shock of spikey-looking hair, mm…whatever. It’s a hairsyle. I… Read more »

Finally… Thankyou. For giving Legend of Dragoon a fair judging.