Dice and Air Hockey, Together at Last 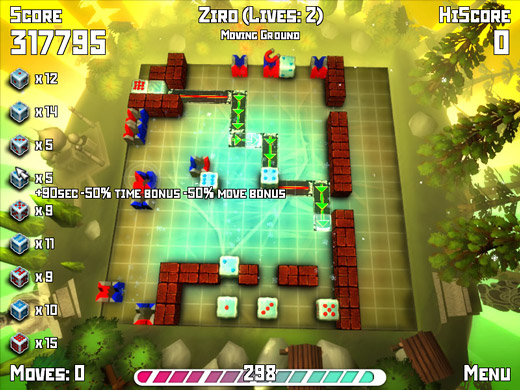 High: The complex, yet easy-to-understand gameplay.

Low: The graphics aren't very pretty, although they're only dice on a table.

It's hard for me to explain how Ziro, a casual game from Eipix Entertainment and Kokakiki, works. The objective is simple enough: match dice in pairs by the number of red or blue dots on their faces to make them equal zero (get it?) and disappear. But there are so many variables which affect this goal that, every time I try to explain it, the game ends up sounding much more complicated (and less fun) than it is.

The player has a god's-eye view of the dice; she moves them by sliding them like air-hockey pucks around the table. they only move in four directions and don't stop until they hit an obstacle or reach the edge of the table. Thus, the tables are veritable mazes, and the path through them depends not only on their layout, but also on the positions of the dice themselves. In order to get a pair of dice near enough to each other to touch and thereby match, the player may have to slide one of them into a third die to line them up properly.

But Ziro isn't only about matching. Players can add and subtract dice from each other. It seems like such a simple thing, the ability to make six into four or two into five. Still, this extra dimension adds richness to the strategy involved—and there's an amazing amount of strategy in this game. Clearing a table requires patience and the ability to think through moves in advance, similar to what one would do in a chess game.

This need to play in one's head before making a move is complicated by different kinds of blocks called “elements” that do different things: some can only be moved once, some can be moved again and again, and the player can remove some of them entirely by clicking them with the mouse. How to use blocks without wasting them? Will this click get rid of too many blocks? Sometimes the only way to find out is to try. Level resets are common—and necessary—because there are so many things that can go irrevocably wrong. Thankfully, resetting a level is as easy as hitting F2.

Unfortunately, these deceptively simple but well-organized aspects of play are not reflected in Ziro's graphics. Although they're only representing dice on a table, the visuals are blocky (in a distracting, not-just-because-they're-dice-and-tables way) and drab. The world is saturated with ugly greens and browns. Perhaps the colors are meant to reflect a gritty underworld where seedy gamblers play dice for against each other in back rooms; perhaps the polygon-deficient graphics are meant to support older computers. But I just didn't like the developers' aesthetic choices.

Nevertheless, I enjoyed Ziro. While it's not as simple as lining up things in groups of three—and not as addicting—it made me think in ways I'm not used to thinking. I kept wanting to play through it faster than I should have, lured by the siren-song of empty table space into thinking that the level layout was much simpler than it was. Was it a time-suck for me? No. But for a few hours, it forced me to solve problems in a new and challenging way. Rating: 7.0 out of 10.

Disclosures: This game was obtained via publisher and played on the PC Approximately six hours were spent in single-player mode and the game was not completed. There are no multiplayer modes.

Parents: Although this game has not been rated by the ESRB, there should be nothing offensive here. Ziro involves problem-solving with dice; there's no violence, no bad language, so sexual innuendo—not even any gambling-style betting. It's safe for kids of all ages.

Deaf and Hard of Hearing: You should have no problems. All mission information is presented in text, there's no dialogue, and all significant auditory cues are reinforced by visual cues. Ziro is totally accessible.