It Will be One Huge, EPIC Battle 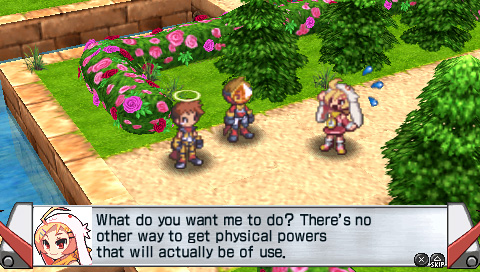 HIGH The soundtrack (with vocals!) in the New Hero Mastery Dungeon.

LOW Saving before the boss of the aforementioned dungeon, dying, resetting, getting the heck out of Dodge, finding out I still lost all my stuff anyway (including $100,000), and having no one to blame but myself.

WTF Whatever comes out of Pirohiko's mouth that isn't a platitude or a pep talk. And even some of those.

Every time you get up/And get back in the race/One more small piece of you/Starts to fall into place. —Rascal Flatts, "Stand"

One of my favorite things about Nippon Ichi titles is how they handle failure. Their strategy RPGs are deep and difficult, yet seem to welcome players with open arms. Yes, their plots and characters are lighthearted and silly—who doesn't love exploding penguins?—but there's also a love for losers that goes deeper than populating games with incompetent demon overlords whom everyone else is trying to assassinate. Nippon Ichi games actually reward players for sucking. Spectacular feats of losing earn us everything from superpowers to DVD-style commentaries. But while most games I've encountered this "suck bonus" in treat screwing up like an Easter Egg, in Zettai Hero Project: Unlosing Ranger vs. Darkdeath Evilman

(ZHP hereafter), player badness is essential to the narrative.

“There is only one battle in this game,” ZHP informs us when we start the game. This is not exactly true, but there is only one battle of consequence. The Unlosing Ranger must defeat Darkdeath Evilman, a huge monster with attacks that do 200 HP worth of damage. By contrast, the Unlosing Ranger is a wuss who just put on his supersuit this morning. (The last Unlosing Ranger, Pirohiko, got hit by a car. He acts as the new hero's mentor, and it doesn't take long to see why the car hit him). How can he best such a formidable foe? By doing what countless RPG heroes before him have done—fight enough weaker creatures to get buff and take him down.

The hero—who, unusually for a Nippon Ichi game, bangs away at things in real time—earns experience for killing things, of course. The twist is that he gets to keep all his stats even if he dies. Stats are really what's important here: levels are gained in the dungeons, but leave the dungeon, whether by clearing it or dying, and one's level is reset back to zero. (The game does keep track of how many levels the player has gained so far, which is one's "base level.") As the Unlosing Ranger fights—and fails—he becomes tougher, stronger, better equipped to take on Darkdeath Evilman. 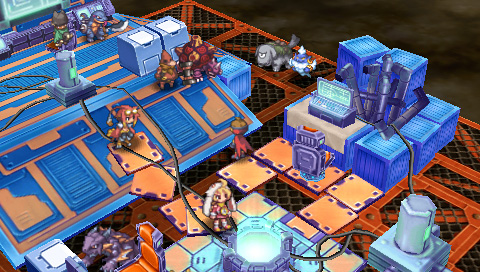 Fortunately, leveling isn't the only way for the Unlosing Ranger to get stronger. Not only does his equipment affect his stats, but players can also modify a "Shadowgram" to permanently increase his abilities. When pieces of equipment are placed on this person-shaped grid, the hero's various stats (short attack defense, hit, speed and so on) are boosted. Different equipment boosts different stats to different degrees, and a well-organized Shadowgram can be the difference between life and death.

However, since I'm not the best organizer of Shadowgrams, I did die…repeatedly. Thanks to the quirks of the statistics and leveling systems, players can go for floors and floors evading attacks and taking no damage while dealing out 1,000+, and then suddenly get smashed by the last boss an enemy out of nowhere. (In the case of the last boss, the player can do a specific thing that helps a lot, which took me a while to figure out). I wouldn't call this a flaw, but it does punish complacency and cockiness. Despite the real-time combat, anyone who thinks they can button-mash their way through ZHP is in for an unpleasant surprise or two…especially in the deep Mastery Dungeons. Think just because you're kicking butt on floor 59 that you can survive two turns with the boss on floor 60? Think again.

Speaking of unpleasant surprises, it's also possible to die without getting smashed to death. That's because the player must also manage their energy which dwindles as the hero wanders around and is replenished by eating. If he runs out of energy, his remaining hit points—usually regenerated by walking—drain away. I have a special dislike of this mechanic: I get lost easily in games, and take advantage of that by aimlessly wandering, killing things and leveling up. Needing to eat in the dungeons to live means that I need to get out of them as quickly as possible. In ZHP, it also means depending on the kindness of the game's random generation system. Meat can't be bought at the shop in the player's hub; it can only be found as a drop from enemies or bought in the dungeons. I spent a lot of time running through early dungeons just to get meat, and I still ran out of it.

But there are surprises of the happier variety, too. Nippon Ichi fans will find some old friends here; they put a smile on my face even as they kicked my ass. Like the multiple-senses-of-the-word experience the hero gains even as he dies, ZHP rewards players who've spent time in Nippon Ichi's universe(s). It's a small thing, but it's nice.

Winning even as one loses is nothing new in gaming—at least, not in how I play—and the way Zettai Hero Project: Unlosing Ranger vs. Darkdeath Evilman

implements it means that nothing the player does, no matter how foolish, is a waste. That implemention isn't exactly groundbreaking (while the game makes grinding for levels easier, it doesn't make it more palatable) but it does force players to think about failure in a slightly new way. Rating: 7.0 out of 10.


Disclosures: This game was obtained via publisher and reviewed on the PSP. 50 hours were spent in the single-player mode, and the game was completed. There are no multiplayer modes.

Parents: According to the ESRB, this game contains: alcohol reference, mild fantasy violence, mild language, and suggestive themes. Like other Nippon Ichi games, ZHP has lots of innuendo and some swearing. But some of the more ridiculous sexism is called out by other characters, and there's no graphic violence. "Teen" seems an appropriate rating to me.

Deaf and Hard of Hearing: This title is fully accessible. All dialogue and mission information is presented in text, and there are no significant auditory cues. I played quite a bit of ZHP with the sound off and had no problems.