You may as well ask, Poor Overlord 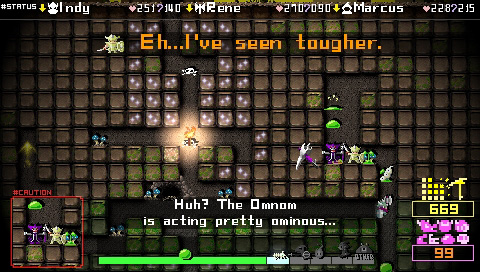 High: Ha! You walked right into my den of Lizardmen! In your mauled face, hero!

WTF?: I'm not sure if the cannibalism is a good thing or a bad thing.

I play a lot of Japanese role-playing games because I'm incompetent. Their random enemy encounters, experience points, and DEF +12 Fairy Princess Armor mean that I never have to think my way out of a tough situation. If I'm getting my ass handed to me, all I have to do is kill more monsters or buy better gear. But I do like to challenge myself sometimes, which is why I like Nippon Ichi's strategy games. Yes, there's plenty of grinding if I want it (I love you, Item World), but their games also force me to take stock of my surroundings and to make my environment work for me. Nippon Ichi knows how to motivate me well: my reward for using actual strategy is usually something like a 50-level character jump, which I can take advantage of repeatedly. Although Nippon Ichi didn't develop What Did I Do to Deserve This, My Lord!? 2,—NIS America just published it—the game is still a natural, if steep, Nippon Ichi-themed progression in teaching me to think for myself.

In My Lord!? 2, sequel to the game formerly known as Holy Invasion of Privacy, Badman!, the player is a God of Destruction tasked with helping an evil overlord protect his dungeon from RPG heroes. Armed with only a pickaxe, she must dig through the soil to build tunnels for the heroes to get lost in and create monsters to fight them off. These monsters develop from "nutrients" found in the soil, and grow and change by eating other monsters. They all have different jobs as well. Some can inflict status effects, some can hit heroes hard with their sharp claws or burn them to a crisp, and some are the worker bees that carry nutrients from one block to the other.

The most obvious "strategy" is to create as many face-mauling Lizardmen or fire-breathing Dragons as possible. But that isn't easy, nor particularly smart. Just like in the real world, the creatures in Badman's dungeon are all part of an ecosystem with its own set of complex rules. Army-building boils down to respecting this ecosystem and making it work for you. I cannot have Lizardmen without the scorpion-like Omnoms they feed off of, and I can't have Omnoms without the Slimemosses they eat. (Frankly, I can't have anything without Slimemosses, since they "pollinate" the soil with the nutrients that make stronger monsters). If I want Dragons—which are very awesome, indeed—I'm going to need heroes. The nutrients that create Dragons only come from the mana discarded in the soil when heroes use their magic spells, and the more powerful magic the heroes use, the more mana nutrients there are.

My Lord!? 2's ecosystem is a dynamic thing, shifting as monsters go about their lives. "Survival of the fittest" is very much at play here. Omnoms who keep getting eaten by Lizardmen can mutate into poisonous creatures to protect themselves, which comes in handy against heroes as well. Beasts at the top of the food chain will grow fat and cannibalistic. It's also possible to control mutation in fairly direct ways. If the player doesn't want something to mutate she can cause an earthquake and cancel the process. She can also trigger evolution by spending her leftover power at the end of a stage to "upgrade" certain creatures.

One very annoying aspect of the game is that areas that the player conquers are divided into stages (1-1, 1-2, 1-3, and so on); getting a Game Over causes the player to go all the way back to the first area. Nevertheless, this rule has a purpose: Badman's lair, however one designs it, doesn't revert back between the stages. The player's power carries over between stages, too. She must not only make sure her power to dig doesn't run out, but must also save and spend it to upgrade her army. As in chess or the stock market, a person's choices influence events long after they're made and can come back to haunt her. Complete "world" do-overs are actually the kindest concession the developers can make to us here, yet it's still frustrating to have to redo two or three stages of work, even if my original work was terrible.

I am nowhere near mastering What Did I Do to Deserve This, My Lord!? 2, but as with most other games touched by Nippon Ichi's magic wand, I'm enjoying my utter failure. More sweet, sweet pain, please. Rating: 8.0 out of 10.

Disclaimers: This game was obtained via publisher and reviewed on the PSP-Go. Approximately 10 hours were devoted to the game; it was not completed. There are no multiplayer modes.

Parents: According to the ESRB, this game contains: animated blood, language, mild fantasy violence and mild suggestive themes. While What Did I Do to Deserve This, My Lord!? 2 involves helping a villain protect his lair from heroes, it's not as offensive as the ESRB makes it sound. There's blood, but it belongs to teeny-tiny sprites that would've looked outdated in 1989. Similarly, their pixelated figures are too small and blocky to look good in skimpy outfits. The game's difficulty level will probably cause more problems for kids than any "themes" or "content" would be.

Deaf and Hard of Hearing: This game is totally accessible. All dialogue and mission information is presented in text, and there are no significant auditory cues.