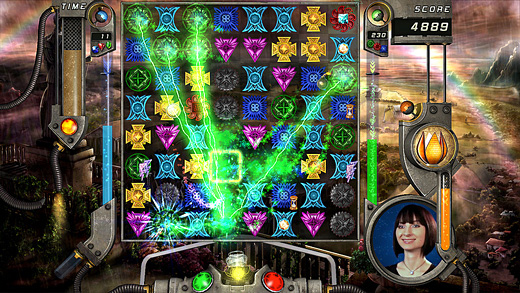 HIGH Clearing a level with eight seconds to spare.

LOW Being stuck in one stage for more than 45 minutes.

WTF Going through time and "cleaning up" after the villain by lining up shapes…makes sense, actually.

Time Machine: Rogue Pilot from Lesta, Co., Ltd. is unlike any three-match game I've ever played. For one thing, it has characters and a story.

A villain (you can tell he's a villain because he's wearing cool shades) has stolen a time machine in order to destroy the world. Our hero, Ilona, must go after him and clean up the mess he's making in the past by… lining up rows of matching shapes? Armed with her trusty cannon, the player must shoot shapes to swap their colors, creating rows of three or more identical objects.

There's a strange logic in this literal interpretation of setting things right.

Naturally, Ilona has help (and hindrances) along the way. Special items like bombs or dynamite clear a lot of objects, but they can't be swapped. Shapes containing gems can't be changed either, and stones can only be destroyed via special items. Bonuses and stipulations like these aren't at all unusual for the genre. Still, there's a particularly urgent quality to this game which makes them more noticeable.

There's usually something relaxing about match-threes for me; something in the way scanning for patterns resets my brain. There's nothing leisurely about Rogue Pilot, though. Whether it's the save-the-world plot, the shooting-gems-with-a-cannon or the sheer brutality of the unforgiving clock, I was always aware of time slipping away from me like so many sands in an hourglass. As the game (and difficulty) progressed, stages felt like they went on forever and yet were still not long enough.

The pace is broken up now and then in the form of 'hidden object" levels which require the player to find objects which don't belong in the time period Ilona is in. Although I've played hidden object games before with no problems, these particular sections and my visual processing didn't get along. The objects aren't very colorful, and color is useful to me in ways that shape isn't. I usually ended up shooting systematically and hoping I'd hit something, which worked fairly well except that the hit detection seemed off. Many times I had to shoot something twice before it disappeared. Luckily these sections aren't timed and players can skip them.

Time Machine: Rogue Pilot is interesting for its plot and its sense of danger and momentum. These things aren't exactly groundbreaking, but for seven dollars, it's decent (and different) enough. Rating: 5.5 out of 10.


Disclosures: This game was obtained via publisher and reviewed on the PS3. Approximately six hours were spent in single-player modes, and the game was not completed. No time was spent in multiplayer modes.

Parents: According to the ESRB this game contains mild suggestive themes. This is a game where players match shapes and find hidden objects, and the main characters are shown in a head-and-shoulder portrait in the corner of the screen. Nothing objectionable here.

Deaf & Hard of Hearing: All dialogue and mission information is in text, and there are no significant auditory cues. I played quite a bit of it with the sound off and had no problems.