For Better or for Worse 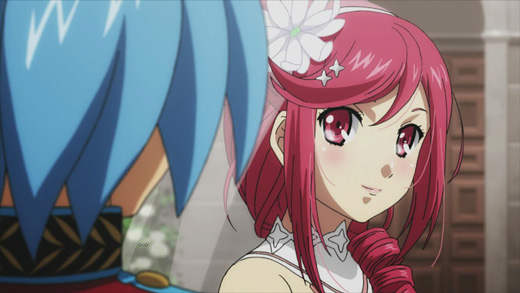 HIGH The hand-drawn character designs seem straight out of an anime.

LOW The Fiance Who Wouldn't Die .

WTF The Fiance Who Wouldn't Die is actually the protagonist.

After playing Namco-Bandai's Time and Eternity

, I feel dazzled by its beauty, but mostly empty… except for my disgust at the alleged protagonist. Still feeling full of that.

To set the scene for this Japanese role-playing game (JRPG), a group of assassins bust in and kill Princess Toki and her fiancé on their wedding day. But have no fear, because Toki is special—she can travel through time and also shares her body with another soul named Towa, who won't put up with anyone's BS. While solving the mystery of who wants them dead, their dead fiance Zach gets to come, too.

Equal parts action RPG and visual novel, Time and Eternity is a pretty game. All the characters look straight out of an anime, even outside of cut-scenes. However, the actual gameplay is nothing impressive: players point a cursor at a map, chat with people, and fight monsters. With a flick of the analog stick, Toki and Towa can run up to enemies to attack with their blades or hang back and shoot at them with rifles. This system has no weight at all and bored me to tears.

However, there's one part of the combat I did like—how Toki and Towa's "condition" (called "dual souls") affects the gameplay.

How they ended up together is a mystery revealed as the plot goes on, but basically they look very different from each other (Towa has red hair while Towa is blonde), have different default elements (Toki's is fire, Towai's is ice), and only one of them can be in control of the body at a time.  Importantly, they can only switch upon leveling up or when the player uses a special item. This means that I couldn't change my party whenever I wanted. Because of this, the game didn't allow me to get complacent, which added an extra (and not unwelcome) level of challenge.

Of course, it helped that I liked Toki and Towa as characters. Toki's sweet but can certainly handle herself against monsters. Towa has a quick temper and is nervous or aloof around Zach because she feels like he's Toki's boyfriend and not hers. Even with Towa's insecurities, though, they still like each other. The twist here is that I'm used to fictional multiple personalities either not knowing about the others or not getting along; personalities sharing a body while being very good friends was a pleasant surprise. 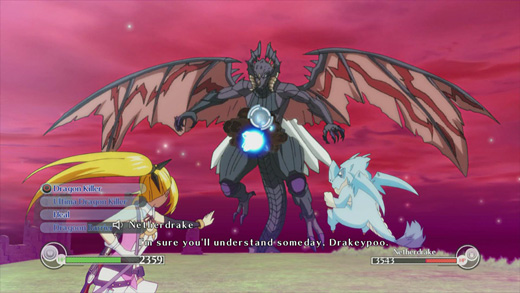 When not killing things, the girls and their fiance talk to people to find out more about the assassins or to help the townsfolk by fetching them things or listening to their problems. These story-oriented portions are ultimately as empty as the combat: read a lot of dialogue, go out and find items, return them to person. To add insult to injury, once players actually solve the mystery of who planned the assassination, they'll go back to the day of the wedding where a whole other group of people will attack them and the process begins anew.

While fighting more and more powerful bosses is nothing unusual in video games, it's usually a function that gives players some idea of how close they are to accomplishing the game's goal. Time and Eternity's version of "Your princess is in another castle" tore this sense out from under me, repeatedly, and just felt cheap. I mean, even Super Mario Bros. assured me that there actually was a princess.

The worst thing about the visual novel part, though, is Zach the fiance.

During battle, I would've said that Toki and Towa are the protagonists—they're the ones directly under my control, and the ones fighting all the monsters to begin with. But when standing around talking (either to townsfolk or to Toki and Towa themselves) Zach is the one whose dialogue I choose. This is a problem, as Zach is really gross and unlikeable.

Upon meeting Towa for the first time, he's thrilled because he gets to marry two girls at once. He also wishes he were Toki's pet dragon, so he can take a bath with her and peek at his dual fiancees in the shower (and there are sidequests to help him get his wish!) I mean, why not just ask her to take a bath with you, guy? Unless part of the thrill is that she doesn't know it's you, in which case you're a creep and why am I supposed to identify with you, again?

Zach reminded me a lot of other kind-of-creepy game and anime dudes: Yosuke from Persona 4 who thinks all girls exist for his personal gratification, or Ryoga from Ranma 1/2 who lets the girl of his dreams think he's her pet pig so he can bathe with her and sleep in the same bed with her. The difference here is that Yosuke and Ryoga are sidekicks and rivals to the main character and get called on their nonsense. Time and Eternity, on the other hand, wants me to think of Zach as the protagonist.

When I was asked to name "the main character" after starting a new game, he's the one I was naming. During the visual novel portions, he has to choose which lady he wants to marry  At some points players run into "memory sites," which unlock cut-scenes between Zach and either Toki or Towa. Still, in the battle sequences he just follows the girls around like a good little AI partner. So why are Toki and Towa's skills unlocked by Zach giving them "Gift Points" when they killed the monsters themselves?

's veneer is gorgeous, but style doesn't trump substance—and the substance here leaves a bad taste in my mouth. Toki and Towa may love Zach the Alleged Protagonist, but I sure don't. Rating: 3.0 out of 10.


Disclosures: This game was obtained via publisher and reviewed on the PS3. Approximately 45 hours were spent in single-player mode and the game was completed. There are no multiplayer modes.

Parents: According to the ESRB this game contains: blood, fantasy violence, mild language, partial nudity and suggestive themes. In particular, there's a group of sidequests where the protagonist needs to fetch items so he can peek at his fiancee in the shower; his (and the player's) rewards are gallery images of her naked. No nipples or public hair, but still. There's also some salty language, but the violence isn't very gory—although the protagonist does get killed off for real (multiple times.)

Deaf and Hard of Hearing: There are subtitles for all dialogue (although they're in very small print), all important mission information is presented in text, and there are no significant auditory cues.