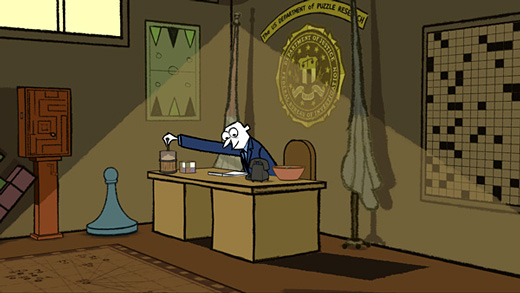 Unlike many gamers with disabilities, there aren't many barriers in games that make them completely inaccessible to me. Sure, there are games I don't like and usually avoid (first-person shooters: I navigate much better in the third-person than the first), and games that mesh with my pattern of skills (the grind-heavy role-playing game [RPG]), but I can count on one hand games that are unplayable because they force me to do something I'm incapable of. Telltale Games's Puzzle Agent is one of them. This is a shame, because it's also one of those things I never knew I wanted: an animated, video game version of Fargo.

Based on the Grickle books written and illustrated by Graham Annable, Puzzle Agent follows poor FBI grunt Nelson Tethers as he investigates an accident at the eraser factory in Scoggins. (Why are the feds involved? Because this eraser factory supplies the White House with all of its erasers. "The President could be fixing a mistake with a Scoggins eraser right now," boasts the proprietress of Valda's Inn).

The snow, the intrigue and the Midwestern accents are equally thick, but there are ways the game sets itself apart from the Cohen brothers' film. One of them is the art style. While Fargo's snow was always unnaturally pristine, its world distant and magical (but as dead as that highway patrolman) the universe of Puzzle Agent seems helplessly, tremulously alive. Its chalk drawing style makes everything look as if it could blow away into dust at any moment. This sense of tenuousness is appropriate for a mystery that gets more and more bizarre the more Nelson learns.

I hate math, and hate word problems in particular ("Figure out how much weight each carrier pigeon can hold"), but I trudge on in Puzzle Agent because I like the ridiculous story, the characters and the art. I even like some of the puzzles—especially the two jigsaw-type ones where pieces automatically fit together when I put them in the right place. A lot of computerized jigsaw puzzles do that—some with satisfying clicky noise—and I always appreciate it. A problem I always had with real-life jigsaw puzzles is that I can't always tell if the pieces are actually fitting.

Things were going fine, but then Nelson finds the corpse of someone who froze to death while trying to get to a certain house. Looking at the guy's map, he can flip tiles to form paths, which not only have to lead to the house but have to sidestep the shadowy figures that are lurking. It is, in other words, a maze. 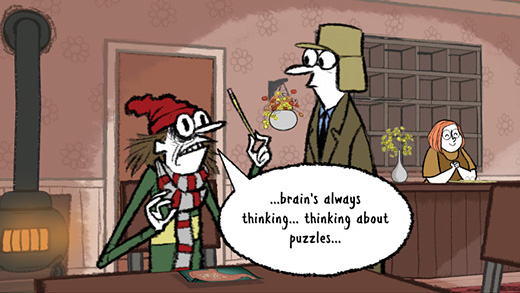 A lot of people enjoy mazes; that's why children's activity books are full of them, and why the little girl I tutored in college always saved them for our sessions together. However, I am not someone who likes a maze. Getting a paper person from point A to point B via a nest of lines always takes me back to sterile rooms where some doctor is writing things in his notebook—things like "three standard deviations below the mean"; "severe visual-spatial impairment;" and possibly "no evidence of psychosis."

The lab-rat feeling makes mazes even less enjoyable for me than they would otherwise be, but while I'm usually able to avoid such things or fake my way through them ("Should I go left, Tera?" "Yes"), Puzzle Agent doesn't offer me an out. While some of the puzzles are skippable—or at least allow players to come back to them later—this "create a path in the woods" maze is crucial to the story: I can't move forward until I get it right, nor can I go back to town and do other puzzles that make more sense. Nelson complains that he must examine the frozen body every time I try to backtrack.

So, I dutifully submit my answers—five, ten, fifteen times. I submit so many wrong answers that the game resets to 10, as if to spare me from the mounting evidence of my own incompetence. It even shows me the answer, but, once again, I can't make my path look like the picture. I have no idea why; they look identical to me. Had there been sounds to tell me if I were flipping the tiles correctly—a "ding!," let's say—or not, the maze would probably have been doable. (Although that's just me: some people with spatial impairments like mine also have various hearing or auditory processing impairments, and may find such sounds equally confusing).

As much as I'd like to, I can't complete the review for Puzzle Agent and it's probably my fault. One of my favorite things about writing for GameCritics is that I get to check out games I wouldn't otherwise play. I like diving into games that I know very little about. Now I see the perils of this head-first approach. In the future I should probably research games I'd like to play, if only to make sure I can actually play them. Rating: Not taking the maze into account, 7.0 out of 10. With the maze, 3.0 out of 10.

“A problem I always had with real-life jigsaw puzzles is that I can’t always tell if the pieces are actually fitting.” Your not the only one. Its been years, but I distinctly remember thinking “do these pieces go together?” (my mother was a huge jigsaw puzzle fan). “I think it almost fits, is it a poorly cut piece, or is this wrong… I cant tell”. I dont like how this has carried over into video games. I think I have figured something out. But my solution doesn’t work. Is my solution wrong, or am I not fiddling with the controls… Read more »

Would it be possible to have a friend complete the puzzle for you so you can continue with the game?

I should’ve asked my mom to look at it. (She offered to, actually, but I never took her up on it–I kept putting it off.) Not a very good excuse, I know. But at least I know better if something like this ever happens again.

Would it be possible to have a friend complete the puzzle for you so you can continue with the game?