It Does One Thing Well 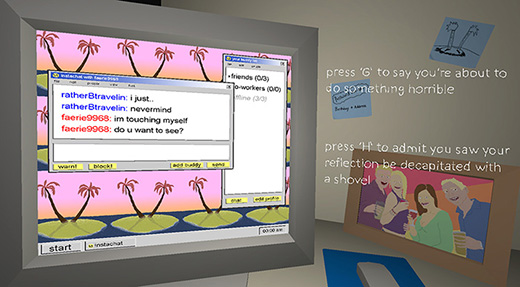 HIGH I have never seen the difficulty of doing basic things while depressed dramatized so well.

LOW The ten-minute play time doesn't leave room for much else.

WTF Wait—there was a story? Like, a real story?

Jesse Barkdsale's The Static Speaks My Name is the story of a young man's obsession with a painting—which I wouldn't have known if I hadn't read it on the game's website. As Mike Suskie points out in his review, the experience doesn't make a whole lot of sense. Its story is told in music, ambient sounds, and objects in the environment—things like handwritten notes, drawings, chatlogs, and dirty dishes. And because it can be completed in mere minutes, there's just enough here to raise questions.

The meat of the game is in the feelings it evokes, and, similarly to Mike, I was impressed with how well Static captures how hard it can be to do simple things like leave the house to buy food when one is depressed. However, my favorite way that this feeling is captured might not be something Barksdale intended.

I'm not used to first-person games or controlling characters with a keyboard. While struggling through the mundane missions—using the toilet, making breakfast-the huge amount of effort everything took really did feel like Trying to Do Things While Depressed. When feeling this way, did you know that making a bowl of oatmeal has an overwhelming amount of steps?

This kind of difficulty carrying out everyday tasks that you need or even want to do is one of the hardest things to understand about depression—even for me, who's experienced it. Video games are especially well-suited to show people what it's like, and Static captures this hard-to-explain aspect very well.

I liked Jesse Barksdale's work more than Mike did, but I agree it leaves a lot to be desired. Yes, I'm impressed that the game is able to convey depression's avolition in only ten minutes, but the actual story is weak and could go much further in illustrating the character who's suffering to players. That said, it's short and it's free, and ultimately, I'm glad I experienced it. Rating: 6 out of 10


Disclosures: This game was obtained via publisher and reviewed on a Mac running Mavericks. Approximately 52 minutes were spent in the single-player mode and the game was completed twice. There are no multiplayer modes.

Remappable Controls: Controls are not remappable. The only options are the W, A, S and D keys to move around while the mouse is used to look.