Gluttony: It's not just a deadly sin anymore 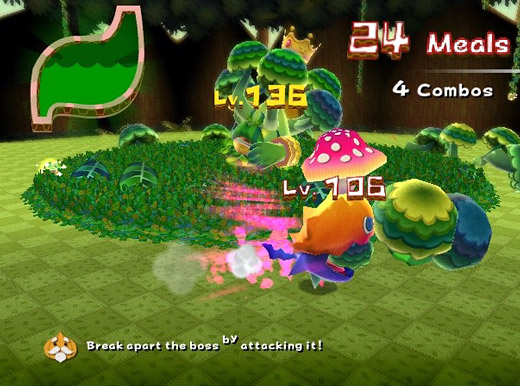 HIGH: Whittling a sinister bunch of grapes down to edible size.

LOW: It's over way too soon.

WTF: All the enemies are food. Where do I start?

The evil Don Onion and his Tabemon monsters have invaded the planet of Star Ving. These space pirates have stolen the planet's legendary orbs, with which they intend to take over the universe. Unfortunately for the villains, they're made of food—fruits, vegetables, mushrooms, chocolate—and the natives are hungry.

In Bandai-Namco's The Munchables, players control one of Star Ving's two most gluttonous residents: an orange-and-blue fish creature named Chomper, and a pink puppy called Munchy. Their mission is to eat as many space pirates as possible. The more they eat, the bigger they grow, and the larger food-shaped enemies they can digest. Thus, Namco Bandai revisits the territory they pioneered in Katamari Damacy and its sequel. The developers don't try to fix what wasn't broken, but tweak the gameplay here and there to improve it and make it feel a little different than its predecessors.

Wiimote controls help in this department, but there are other differences as well. As Chomper and Munchy eat and grow, they gain RPG-ish levels. Players cannot eat Tabemon monsters with levels higher than themselves, but they can roll into them, splitting them into several smaller monsters to gobble up—which may, actually, be better strategy in the long run. How well players do in the game depends a lot on how many "meals" they have eaten. Eating several space pirates at once adds bonus meals—as many as 60 or more—to the total, which is then used to calculate the player's ranking when the stage is over. As far as Game Overs are concerned, the game is very forgiving. If the player gets hit by an enemy, their character shrinks and a warning siren goes off. Getting attacked again in this state is instant death; but shaking the Wiimote or jiggling thumbsticks (depending on the controller setup one is using) makes the creature grow back to its original size. No levels are subtracted, but players lose some of their meals.

Scattered throughout the game worlds are lots of tools to help Chomper and Munchy eat as many meals as they can. Vacuums make them suck up tons of space pirates at once; rocket ships allow them to speed around with their mouths open like whales after plankton, eating everything in sight. Entering "Quake Mode" makes the ground shake so that all enemies in the vicinity fall over and are dizzy, while "Spin Mode" makes it easier for our heroes to knock bigger pirates into smaller, more manageable pieces—the better to eat them, of course.

There are other, non-edible treasures as well. Each stage is populated with glowing acorns, and if Chomper or Munchy hunt down all that exist in a level, they get a prize; something to wear on their adventure, whether a pair of sunglasses or a roll of pink toilet paper. There's even a secret character and an extra challenge for all the stages.

The Munchables is cute, patently ridiculous and able to fine-tune the snowballing gameplay that made Katamari Damacy so much fun: all these, combined with its budget price, certainly made it an enjoyable if not exactly groundbreaking title. But its boss battles are what really made the game stand out for me. In the third stage of every world, the player faces off against a Boss Pirate, huge and unusually silly-looking. Dealing with a Boss Pirate is not much different than handling its smaller counterparts. Yet slowly whittling down a three-times-bigger-than me Broco-Lee or Rice Baller to digestible size is particularly satisfying.

The Munchables doesn't push any envelopes. However, it handles those envelopes' contents so well and so quirkily (giant sentient chocolate bars, for goodness' sake!) that I couldn't stop playing it, even after I'd finished. For those who like the "get as big as possible" mechanic or are simply intrigued by having to eat their way to glory, this game is definitely worth a look—especially since it's only $30 brand new. Rating: 7.5 out of 10.

Disclosures: This game was obtained via retail store and reviewed on the Wii. Approximately 15 hours were devoted to single-player mode. The game was completed 1 time. No time was spent in multiplayer modes.

Parents: According to the ESRB, this game contains: comic mischief, mild cartoon violence. Kids should be perfectly okay with The Munchables. Everything is cute, cuddly and ridiculous.

Deaf and hard of hearing: All dialogue and mission information is conveyed in text, and there are no significant auditory cues. Fully accessible.

This game looks like it came straight from Japan. Anything with this absurd gameplay has to be from Japan 🙂 haha. Good review though, the game does look like it’s a bit fun.