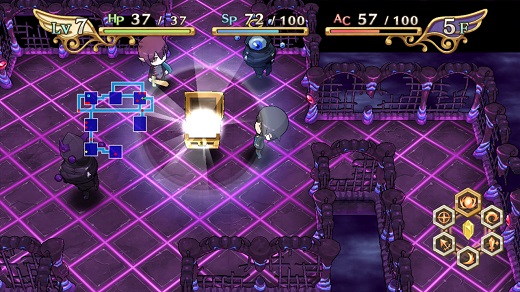 High: The complexity of the moral choices is interesting.

Low: Gameplay is simple. And not in a good way.

WTF: A red-haired, black-wearing antiheroine who sounds like Michelle Ruff? Where have we seen that before?

While walking home from school with his fellow loner-slash-acquaintance-slash-possible friend, Shin Kamazake is attacked out of nowhere by mysterious beings. The next thing he knows, angels are telling him that they've resurrected him from death with the help of a "Fate Awakening Crystal" and made him into God. If this sounds confusing, don't worry. The game is a lot simpler than it first appears.

As a dungeon-crawler that's a sequel to The Guided Fate Paradox, The Awakened Fate Ultimatum has a lot in common with 2010's Zettai Hero Project: Unlosing Ranger vs. Darkdeath Evilman. Shin explores dungeons, fights monsters, collects items and finds food so that he doesn't starve to death.

As God, he has access to both angelic and demonic powers. Using the L2 and R2 buttons, players can make Shin "Deitize" into his angel and devil forms, which are particularly effective against enemies of the opposite type (e.g. his angel form is more powerful when faced with devil-type enemies.) I'm all for simple-yet-engrossing mechanics, but switching between two forms over and over again gets boring quickly.

In addition, there are only a few basic enemy types that all have the same color schemes—white for the angels, red and black for the devils. While the limited color palette makes it easy to tell which powers an enemy will respond to, the downside is that the enemies all look the same, which adds to the game's general monotony.

This sameness and repetition came to a head for me around the tenth dungeon, when it became impossible to progress without tons of grinding through earlier stages. Boosting the levels of my weapons and equipment was ultimately more helpful than leveling my character up, but I still had to traverse the same areas dozens of times to find things to sell for much-needed upgrades.

So the gameplay isn't very meaty, but how's the story? When he's not clearing out dungeons, Shin builds relationships with his "exclusively assigned" angel Jupiel and the mysterious scientist Ariael. Plot choices give him points to spend tricking out his angel or devil forms, but putting the practical applications aside, the player's choices address questions all too familiar to those who've played any of the Disgaea games: Are angels always good? Are demons always evil? Are they really that different from each other, and can they work together?

I always try to do morally good things in games when given the choice, and it's interesting how The Obviously Right Thing isn't always the best thing in The Awakened Fate Ultimatum. Trying to save everyone can cause unforseen problems down the road, and it just may be that the world needs a vengeful god now and again. However, as interesting as the moral choices might be, The Awakened Fate Ultimatum is too many dungeons, too few combat options, and too many of the same themes Nippon Ichi has dealt with before. Rating: 5 out of 10.


Disclosures: This game was obtained via publisher and reviewed on the PS3. Approximately 30 hours were spent in single-player mode, and the game was completed twice. There are no multiplayer modes.

Parents: According to the ESRB, this game contains: fantasy violence, language, mild blood, and mild suggestive themes. The violence is just cartoony creatures getting whacked with cartoony swords, and everything else is what any teenager would hear or experience when interacting with each other. The Awakened Fate Ultimatum is just fine for young teens.

Deaf and Hard of Hearing: All mission information and dialogue is presented in text, and there are no necessary auditory cues. I played this for many hours with the sound off and had no problems.