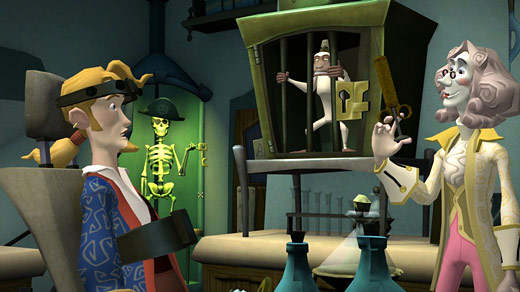 HIGH The main characters are as strong as before—perhaps moreso.

LOW The secondary characters? Not so much.

When we last left Guybrush Threepwood, he was sailing his ship, the Screaming Narwhal, away from an evil French doctor. But, the Marquee DeSinge will pay any price for Threepwood and his voodoo-cursed hand; in The Siege of Spinner Cay, we find our hero facing off against hired mercenary Morgan LeFlay. She gets his hand, but he gets her grappling hook to use as a suitably pirate-y replacement. Free from the inconvenience of a defiant cursed hand (and now sporting a very stylish hook), Guybrush docks in a town called Spinner Cay, which is full of merfolk. This place may be the key to finding La Esponja Grande, the cure for the voodoo pox.

Although I've heard of LucasArts' venerable Monkey Island series, these Tales… spinoffs from Telltale are the first Monkey Island games I've ever played. (My last experience with a point-and-click adventure game was Riven, many years ago). While I'm still getting the hang of the whole not-really-killing-enemies thing, I also still enjoy the games' humor and their characters, who are often not what they seem to be at first glance.

"Do I LOOK like a man who knows what's good for me?" Guybrush tells a pirate infected with the voodoo pox that he released Pandora-like upon the world via his own incompetence. His wife, Elaine, is not so much a damsel-in-distress as an assistant, a Jeeves to her husband's Bertie Wooster. By the time Threepwood "rescues" her, she's got everything under control: the monkeynapped primates are being rounded up, and the pirate who abducted her isn't such a bad guy after all. In fact, he's hunting magical artifacts in the jungle right now! Why don't you go help him, honey?

If The Siege of Spinner Cay has a weakness, it's that the game's secondary characters aren't as rich or as interesting as they were in the first installment. The merfolk who inhabit the Cay are all carbon-copies of one another. Guybrush can't tell the men from the women, and this same non-descriptness is reflected in their personalities as well. There are exceptions—pirate hunter LeFlay and the pair of poxy pirates who are supposed to bury a golden artifact for their captain come to mind—but on the whole, the people (and fish) Guybrush meets aren't as fun this time around.

Nonetheless, the Threepwoods and LeChuck are still as amusing as ever. I definitely want to know what happens next. Especially after the ending: "I wasn't expecting that at all" doesn't even approach my feelings about it. Rating: 7.5 out of 10.

Disclosures This game was obtained via publisher and was reviewed on the PC. Approximately 6 hours were spent in single-player mode; it was completed one time. There are no multiplayer modes.

Parents: According to the ESRB, this game contains alcohol reference, cartoon violence, mild language, suggestive themes. If children can watch a PG-rated movie, they should be fine with The Siege of Spinner Cay. Guybrush Threepwood is a bit morally ambiguous for a hero (he is a pirate, after all), but all the violence is Loony Toon-ridiculous and the suggestive themes are not even strong enough to be double entendres.

Deaf and Hard of Hearing: Unlike the previous installment, Spinner Cay is totally accessible. There are subtitle options for the dialogue, and there are no significant auditory cues. Even the one puzzle that depends on sound is captioned.