"This should be interesting. Or fraught with peril." 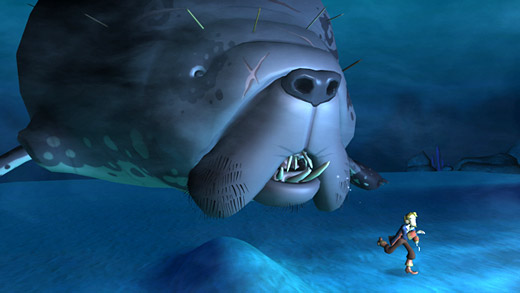 LOW These games are always over too soon.

WTF Much of the game takes place inside a giant manatee.

Things aren't going well for Guybrush Threepwood. His ship is stuck inside a giant manatee (don't ask), and Threepwood fangirl-turned pirate hunter Morgan LeFlay is stuck with him. To top it off, the manatee's lost his sense of direction, and explorer Coronado De Cava has asked Guybrush to replace his old crew, who all died. But if De Cava's crew are dead, who are those guys partying like frat boys in the belly of the beast? Can Guybrush steer the lost manatee back on course? And for the love of God, why don't manatees have blowholes?

Lair of the Leviathan is the strangest chapter of Tales of Monkey Island yet—and I mean that as a compliment. Guybrush Threepwood spends much of the adventure inside a giant manatee, water-sliding from mouth to belly and sidestepping pools of bile, which apparently have a high alcohol content. (Beware that yellow stuff, though, bra). In order to get free and find the voodoo-magic-sucking Esponja Grande and thereby rid the world of the voodoo pox that is ultimately his fault, Guybrush must befriend a brotherhood of bile-drunk partiers. Joining the Brotherhood will take all of his wits…and most of his liver.

An adventure game is nothing without puzzles, and those in Lair of the Leviathan are challenging but sensical—the kind that might make me check an FAQ, but then I'd feel silly afterwards. ("Oh, of course!") While in training for a pirate face-making contest, Guybrush must "collect" funny faces from the other pirates to use in his arsenal. De Cava refuses to make a face if "asked" directly ("ARR!"); he also refuses to drink the yellow bile, because it causes his eyes to do funny things. It was easy enough to put two and two together—trick De Cava into drinking yellow bile, get his coveted pirate face—but I couldn't figure how how to do that on my own. After finding the answer in an FAQ I thought: "Hey! That's really clever!"

While I thought characterization was lacking in the previous installment, it makes a triumphant return here. The Brotherhood are stereotypical in a fun, cartoonish way: there's the nerd, the bad-boy leader, and the frat boy who owes a debt to Sean Penn's character in Fast Times at Ridgemont High. Their personalities, so familiar to us, are ripe for Guybrush to play off of. Shy Noogie wants a date with Morgan LaFlay, and Threepwood promises him one—but tells Morgan he's sending her on a three-pronged "recon mission."

Morgan herself is not as simple (or as evil) as she first appears. She highlights Guybrush's dismissive attitude towards women, mostly because she doesn't put up with it. While his wife Elaine either ignores his arrogance or thinks it's cute, Morgan's responses are those of a fan who realizes that the object of her admiration isn't so great after all. She shakes her head, rolls her eyes, tosses his (autographed) picture away. But she is never crushed; Morgan confronts her idol's imperfection and doesn't let him treat her like crap. When Guybrush needs her help in a fight, she makes him apologize to her—properly—before she jumps in.

Lair of the Leviathan is, I think, the best chapter of Tales of Monkey Island so far. Here's hoping the quality writing and characterization continues in the remaining chapters. Rating: 8.0 out of 10.

Disclosures: This game was obtained via publisher and reviewed on the PC. Approximately six hours of play were devoted to the single-player mode (completed 1 time). There are no multiplayer modes.

Parents: According to the ESRB, this game contains alcohol reference, comic mischief, mild language, mild suggestive themes. Like its Tales of Monkey Island predecessors, Lair of the Leviathan should be appropriate for older kids. There's some sexual innuendo (dating is a heavy theme in this game), as well as some alcohol- (well, bile- ) drinking.

Deaf and Hard of Hearing: All dialogue is subtitled (captions can be turned on in the Options), and there are no significant auditory cues—though you will miss out on Murray the Skull's snarky interpretation of the end credits.