Won't anyone think of the monkeys? 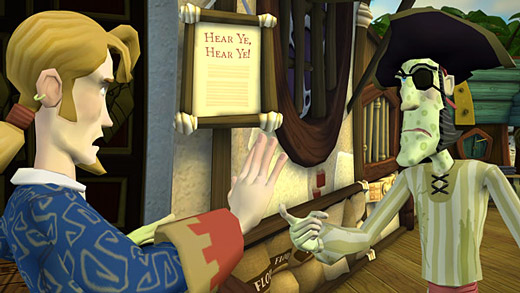 LOW Wandering the jungle in circles, trying to figure out the map when you're not good with maps.

Guybrush Threepwood, Mighty Pirate™ has a bit of a problem. While fighting the evil (and undead) LeChuck, he screwed up a voodoo recipe and, instead of destroying his nemesis, turned him human. And then he left LeChuck alone on a ship—with his wife. To make matters worse, Guybrush's hand is all green and poxy and has totally gone Dr. Strangelove: punching him in the face, making rude gestures at people and generally not cooperating with him. Our hero finds himself stranded on an island where the winds always blow inward; thus, it's impossible to sail away from it. Will Guybrush ever make it off of Flotsam Island? Will he see his wife Elaine again? Will he be able to save all those monkeys from whatever horrible thing LeChuck is trying to do to them?

Part of LucasArts's long-standing Monkey Island point-and-click adventure game series, Launch of the Screaming Narwhal is the first of five chapters in Tales of Monkey Island. Although he's a swashbuckling pirate, the only rapier Guybrush uses is his wit. He gets what he wants by talking to people, and by finding, combining and using items. (Throwing a plant root into a barrel of grog is a cheap way to get root beer).

Just because there's no enemy-slashing doesn't mean that Launch of the Screaming Narwhal is boring. The game sparkles with likeable characters and humor. There are plenty of Monkey Island veterans on the development team—including design director Dave Grossman, who worked on the original Monkey Island and its sequel—as well as people who've worked on Strong Bad's Cool Game for Attractive People and Sam & Max Hit the Road. Thus, there's plenty of good comedy writing on display here. In fact, the game's writing is so good that I don't know how to review it without giving everything away. The game itself was surprisingly difficult; seeing every single thing in the environment as potentially useful took a lot of getting used to, and I had to consult an FAQ more times than I care to admit.

I'm not very good with maps, so I wasn't fond of the jungle where Threepwood spends quite a bit of time. In this jungle he follows maps which have pictures of animals on them (a bee, a monkey, a boar, and a bird). At diverging paths, players must listen for the sound of the animal next on the map and follow it. Unfortunately, there are no visual cues for these sounds at all, so gamers with hearing impairments will have unnecessary difficulty.

These puzzles are just a vehicle to move the story along: lab-rat tasks that reward us with Guybrush Threepwood's wit and wisdom ("It's amazing how many of life's problems are solved by indiscriminate cannon fire"), as well as his uncanny ability to run into interesting (read: strange) people. There's Davey Nipperkin, a reporter who's amid a drought of treasure-huntin,' ship-stealin,' bar-fightin' pirate news; a Spanish explorer searching for the ultra-rare Dark Ninja Dave doll Power Pirate action figure, and a creepy French doctor who wants Threepwood to donate his hand to science—while he's still using it.

Yes, these characters are stereotypes, or 180-degree reversals of same (the scurvy pirate who makes and sells glassblown unicorns, for instance). Still, what are pirate stories but fairy-tales with a grain of historical truth? Indeed, as I played I kept thinking of The Princess Bride, and I don't think the game's skinny blond pirate protagonist is the only reason why. The satire on display here is neither subtle nor particularly insightful, but it is funny. And Guybrush is so likeable—in that pestering, caddish sort of way—that I want to know what happens to him. That, really, is what a serial game should accomplish; to leave players hungry for more. Rating:7.5 out of 10 Dark Ninja Daves

Disclosures: This game was obtained via publisher and reviewed on the PC. Approximately 6 hours of play was devoted to single-player modes (completed 1 time). There are no multiplayer modes.

Parents: According to the ESRB, this game contains alcohol reference, comic mischief, mild language, mild suggestive themes. Launch of the Screaming Narwhal has a couple of jokes about underwear and bodily functions, as well as many references to grog. There's a scene where The Voodoo Lady tells a long and apparently graphic story about her lover, but the player never hears it. The most potentially offensive line is when someone tells Guybrush that he has "pirate spunk" and Guybrush says, "Ew." E10+ seems like a pretty accurate rating to me.

Deaf & Hard of Hearing: You're going to have some problems. While you can turn subtitles on in the Settings menu, there's a jungle that Guybrush can only find his way around by following the sounds of different animals. Online walkthoughs give good directions, but Guybrush spends a good-sized chunk of the game in this jungle. the developers could definitely have put some visual indicators in.