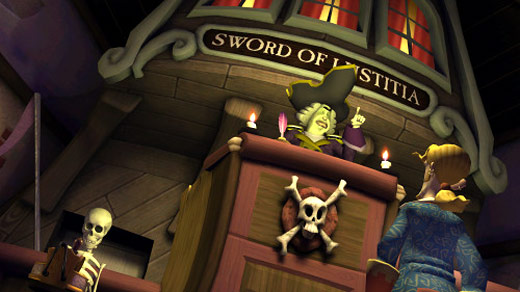 HIGH The Harry Potter-esque way that the plotline connects back to Chapter 1.

LOW The gameplay connects back to Chapter 1 (i.e. the jungle) as well.

After an adventure inside a manatee he'd just as soon forget, Captain Threepwood is back on Flotsam Island—and all his dastardly deeds have caught up with him. The people of Flotsam are charging him with everything from scalding the finest leg on the island with nacho sauce to consonant defacement. And Guybrush, never one to pass up anything self-serving or foolhardy, offers to defend himself at trial. How will he get out of this mess in one piece? (Hint: with lots of lying, bribery and mischief-making).

In Chapter 4 of Tales of Monkey Island (The Trial and Execution of Guybrush Threepwood), our hero faces his greatest challenge yet: the pirate legal system. Channeling Phoenix Wright, he must threaten buy off cross-examine witnesses and tamper with collect evidence. Ensign Hemlock's cat was paralyzed with fear by Guybrush's bar fight? Nothing some iron shavings and an electromagnetic monkey can't fix!

Once again, there are all kinds of interesting characters for Guybrush to meet up with. In court is the perpetually hand-waving prosecutor Stan (remember him?) who tries to sell cheap trial souvenirs after hours. The Right Honorable Judge Wallace P. Grindstump mixes drinks in Club 41 at night. Perhaps Guybrush's interactions with them don't have the depth of his relationship with Morgan LeFlay in the previous installment, but they're still funny.

As for the puzzles, they run the gamut from clever to downright confusing. In between fetching Joachin de Oro a glass eye the color of Pirate Pox Rage ("like all the cool pirates have") and winning a Fugu Jolokia pepper by holding it to his tongue for 11 seconds (which is harder than it looks), Guybrush has to once again brave the jungle with a map. This time, the map in question is a menu of specific meals which must be fed in a certain order for the voodoo-sucking La Esponja Grande, in order to mature the artifact enough to cure everyone of the Pox of LeChuck. The way(s) Guybrush folds the map effect the physical layout of the jungle—which is actually pretty clever, once I figured it out. I've never liked the jungle—for personality and spatial processing reasons—but it doesn't come close to ruining the game for me.

While Lair of the Leviathan is still my favorite chapter so far, The Trial and Execution of Guybrush Threepwood still has plenty of everything about the Tales of Monkey Island series that I like: quality writing, loveable characters, and challenging puzzles. I'm sorry there's only one more installment left. Rating: 7.5 out of 10.

Disclosures This game was obtained via publisher and played on a PC. Approximately six hours were spent in the single-player mode. (Completed one time). There are no multiplayer modes.

Parents: According to the ESRB, this game contains: comic mischief, language, mild suggestive themes. Captain Threepwood isn't the most heroic of video game protagonists (he is a pirate, after all). Yes, ordering drinks in a bar is essential to solving a couple of puzzles. And yes, Morgan LeFlay and his wife duke it out while calling each other all sorts of creative names. But everything is more innuendo than explicit; this game should be fine for older children.

Deaf and Hard of Hearing: You should have no problems. Subtitles can be turned on in the Options menu and there are no significant auditory cues, unlike the last time Guybrush visited the jungle.