"Oh, Heck no. I am not Getting Stuck in this Afterlife." 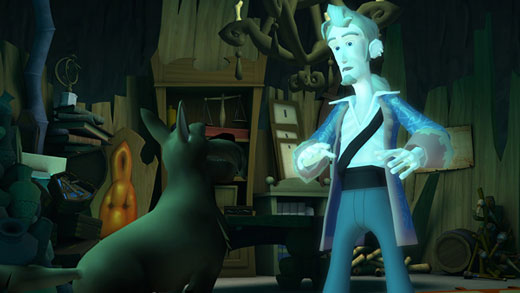 HIGH: Needing to combine puzzle-solving with speed in the final sequence.

LOW: Needing to combine puzzle-solving with speed in the final sequence.

My time with Telltale's Tales of Monkey Island series has been amusing, strange, fun—and a little scary. Most of the games I play are paeans to patience rather than skill; if I'm stuck, I just need to kill more enemies, upgrade my weapons or brush up on my roshambo. ("Ah…fire beats ice!") Although every game I've ever played has puzzles in it, I'm not used to sustaining that kind of thinking without some mindless mob-smashing to break it up. Guybrush Threepwood, Mighty Pirate ™ may not fight enemies aside from "insult swordfighting" and the occasional face-making contest, but his adventures have allowed me to flex my puzzle-solving muscle in ways that make sense, aren't too overwhelming, and are hilarious.

All these things are still true about Tales of Monkey Island Chapter Five: Rise of the Pirate God. The last chapter of the series opens in a graveyard, where Guybrush Threepwood is buried. Yes, he's really dead. Killed by the LeChuck, he's now in the pirate afterlife. There's Galeb, a "strange old man who kind of smells like olives" and takes pictures of newly-dead souls wandering into the Crossroads for the first time; there's a grog machine (Diet Grog and Grog XD are sold out, natch), and a whole room full of buried treasure. A pirate could stay here forever—unless a formerly-human zombie has kidnapped his wife, of course.

The writing and character development are strengths here, as always, but this is the story's climax; such things take a back seat to action, and the puzzles really shine in this installment. The final showdown between Captain Threepwood and LeChuck is almost as frustrating as it is clever. Guybrush is aboard LeChuck's ship, and his archnemesis will not leave him alone. Like some zombie cuckoo-clock figurine, LeChuck shows up every so often to throw Guybrush to a different part of the ship. The trick is to find context-sensitive items and interact with them as quickly as possible. For instance, under the ship's keel is a key, which Guybrush can snatch when LeChuck throws him that way for a keelhauling.

This last series of puzzles is highly complex—it is the climax of the last chapter in the Tales of Monkey Island series, after all—but Telltale doesn't make it any more frustrating than necessary. Once the player does what she needs to do in a certain area of the ship (gets the key under the ship's keel, let's say), that area gets taken out of rotation and LeChuck stops throwing Guybrush there.

While earlier installments had more interesting interaction between the characters, Rise of the Pirate God ends the series on a high note, gameplay-wise. It also leaves me sad that there aren't any more. I'll miss the perfectly balanced anachronisms, the love-struck manatees, and the truly bizarre puzzles that somehow make total sense. (Of course giving monkeys electric shock makes them collect keys for you). But most of all, I will miss that not-so mighty pirate Guybrush Threepwood. His mixture of amorality and naïveté—the sort of thing so many Japanese RPGs try to accomplish but don't—makes him a joy to play. I've had so much fun with Guybrush, I'm ready to play the original Monkey Island games. Rating: 7.5 out of 10.

Disclaimer: This game was obtained via publisher and reviewed on the PC. Approximately six hours of play were spent in single-player mode (completed 1 time). There are no multiplayer modes.

Parents: According to the ESRB, this game contains alcohol reference, cartoon violence, mild language and mild suggestive themes. Parents of older children don't have much to worry about. As always, the "alcohol reference" is to grog, the "language" consists of the occasional "hell" and "damn," and the sexual innuendo is much milder than in Tales of Monkey Island Chapter Three: Lair of the Leviathan. The player character is a (bumbling, incompetent) pirate, so some emphasis is put on stealing treasure and lying. It's all in good fun, though.

Deaf and Hard of Hearing: You should have no problems. All dialogue is subtitled (you can turn on the subtitles in the Options menu) and there are no significant auditory cues.