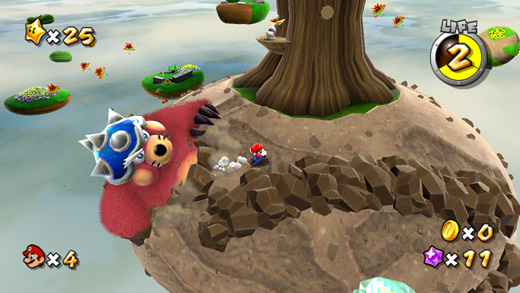 It's easy to dismiss Nintendo's Wii as a $250 gimmick. The console's "revolutionary" library is full of muti-platform movie tie-ins and remakes—not to mention the last minute control-swapping in The Legend of Zelda: Twilight Princess. Sure, the Wiimote can make first-person shooters more natural to play; it's also probably no small factor in Manhunt 2's infamy. (When you strangle a guy, it really feels like you're strangling a guy!) But the real test of the Wiimote is a game that showcases its unique features while integrating them so deeply into the gameplay that its uniqueness doesn't distract us. There haven't been any games that fit the bill. Until now.

Instead of traversing a castle and its grounds (Super Mario 64) or a polluted island (Super Mario Sunshine), Mario spends Super Mario Galaxy traveling through the cosmos. His adventures in outer space require him to grapple with the fickle quirks of gravity, which makes for some really fun and unique level design. The plumber in the red suit has always moved in a wide variety of directions—down into pipes, up vines, through blocks, over the heads of giant turtle monsters—but now he can walk upside-down. Sometimes gravity will pull him to the underside of a planet as he bounces or flies to it, making him stick like a fly walking on a ceiling. At other times, the only way forward is under: dead ends often turn into secret pipes and passageways when players take Mario to the other side of a planet. Although it's impossible to make anything on a flat 2D screen truly 3-dimensional, Super Mario Galaxy forces me to think of the gameworld as fully sided, like the real world I live in. Such geography was hard to get used to at first, but it stretched my problem-solving abilities and, frankly, broke platforming puzzles free from the box they've been stuffed in for 20 years.

While planet-hopping, players discover celestial features that not only flesh out the setting, but take advantage of the Wii's unusual control system in ways that feel more real than pushing some buttons and a thumbstick. Take the "pull star", for example. This shiny blue body hangs in the sky, and players can make it drag Mario toward itself by aiming the Wiimote and pressing the A button. By holding out my hand toward the screen, it really feels like I'm pulling Mario toward his destination. He can also spin—into enemies, wooden crates and big yellow Launch Stars that propel him to other planets in the galaxy. The player makes him spin by twisting the Wiimote from side to side as if opening a jar of pickles. This unscrewing motion manages to feel different and natural at the same time. It's not the kind of movement any videogame has asked me to do before, yet it fits so comfortably here. It's also very apropos: sometimes Mario finds metal screws in his environment that he can loosen or tighten by spinning like a human screwdriver on top of them.

Super Mario Galaxy updates Mario's universe for the Wii's new and unique technology, but while much has changed, there's a lot that's stayed the same. Our hero still has a wide variety of tools and weapons at his disposal. He can fly for a limited time as a bee, dipping down from time to time to build up lost strength, hopping from flower to flower and climbing giant honeycomb walls. Rainbow-colored stars make him invincible and silver mushrooms turn him into a tightly wound spring. In this form he bounces always, difficult to control, but a wave of accomplishment breaks over me when I finally—finally!—shoot him to the top of a pillar of stones and butt-stomp the column into oblivion to reach the secret underneath. Even my beloved Fire Flower makes its 3D debut, and brought a twin: the Ice Flower, which lets Mario walk on water.

If there's anything wrong with the game at all, it lies in the things that haven't changed. Some of its stages have been staples since the earliest incarnations of the series. There are fire levels and ice levels and desert levels and swimming levels, and how much a player enjoys them will depend on how much she's liked them in the past or how tired she is of seeing them. However, even in such familiar territory the developers change things up a bit. Mario has finally learned to ice-skate, so he's a formidable opponent in races against penguins and doesn't slip-slide on ice anymore. Also, he can jump into tornadoes of sand, propel himself high in the air ("Whee!"), and float down like samara from a tree. Levels I was sure would be boring did a lot of unexpected, enjoyable things. It was as if I were experiencing levels I'd seen a million variations of for the first time.

That, I think, is the strength of Super Mario Galaxy. It makes a veteran Mario fan like me feel like I'm playing a Mario game for the first time. It's like the seminal Super Mario 64 in that way. I'm glad that after 20 years, Nintendo can still make something old feel new again. Rating: 9.0 out of 10.

According to ESRB, this game contains: Mild Cartoon Violence.

Parents have nothing to worry about. There's no graphic violence, no sexual content, and no bad language whatsoever. There's some stereotyping of Italian immigrants (mostly in the voices of Mario and his brother Luigi), but that's the only objectionable content there is.

Mario fans will find plenty to love. Basic staples of the series are still here—the puzzles, the pipes, the quirky items, the acrobatic jumping—and enough has been added to make even those familiar things feel fresh and new. In particular, playing around in outer space with wonky gravity is a lot of fun.

Gamers who don't like Mario at all won't find anything in Super Mario Galaxy to convert them. Everything you dislike about the Super Mario series is probably still here, too.

Deaf and Hard of Hearing gamers should have no problems. All speech and relevant information is in text, and there are no auditory cues that don't have visual cues paired with them.

[quote=Anonymous]HEY LOOK AT ME! I’M GIVING THIS GAME A LOW-SCORING REVIEW JUST TO DRIVE TRAFFIC/HITS TO MY WEBSITE! * Low-scoring relative to other critics. Among 50+ reviews on Gamerankings and Metacritic, this 9/10 is the lowest score by far.[/quote] Hey, it obviously drove you here so we are all grateful for your wonderful contribution. But I don’t know why I’m thanking you since you likely never will turn up again unless one of the three games you buy in a year gets a score here that is on the lower end of some arbitrary rating scale. Nevermind the fact that… Read more »

@above anon: Of course we look at the content. We’re complaining because the review is brief, poorly-written, and the score is poorly justified. Too similar to previous games? I’d like to see you do better, Ms. Kirk. What more could you ask for? SMG has arguably reinvented the platformer with its special gravity effects, spherical worlds, and other innovative game mechanics like the sling pods, bubble blowing, and more. I’ve noticed that some of the lowest-scoring reviews for this game were written by female critics, e.g. this and Tracy Erickson of Gameshark, who took a slight issue (camera glitches) and… Read more »

[quote=Anonymous]So, Mass Effect got a 10 (higher than average), Crysis a 9.5 (higher than average) and Super Mario Galaxy a 9 (lower than average). I suppose unless Mario gets a gun machine this game stands no chance by these reviewers. Anyways, it is a good way to get more hits to this site, isn’t it?[/quote] You’re right. It’s really important that critics never score a game either higher or lower than the established average. I for one am not a fan of this whole trend of critics expressing their opinion or this nonsense about how the content of the review… Read more »

I think it’s wonderful that people focus so much on numbers at the end of reviews. It’s a fantastic thing for gaming journalism and why it’s of such high quality lately.

[quote=Anonymous]So, Mass Effect got a 10 (higher than average), Crysis a 9.5 (higher than average) and Super Mario Galaxy a 9 (lower than average). I suppose unless Mario gets a gun machine this game stands no chance by these reviewers. Anyways, it is a good way to get more hits to this site, isn’t it?[/quote] There isn’t really a conspiracy here… I mean, sure, Mass Effect and Crysis were pretty flawed in some parts, but the fact is that platformers have kind of lost their popularity and position next to RPGs and Shooters, even though Mario Galaxy defies what you’d… Read more »

Anyways, it is a good way to get more hits to this site, isn’t it?

What is the 9 about?
You liked the game.
And ye sit plays like a Mario game.Just like
Zelda plays like a Zelda games.
But if you had the feeling you were playing some
extra mario 64 levels. Give me a call.
+31646291841

You’re right. It’s really important that critics never score a game either higher or lower than the established average. I for one am not a fan of this whole trend of critics expressing their opinion or this nonsense about how the content of the review is more important than the score. After all, a game’s average is a quantitative measurement of the quality of the game, and no one could possibly like it either more or less than that without being influenced by ulterior motives. Clearly the score is the most important part of the review, and unless the critic… Read more »

Numbers are just numbers. For the most part they just provide the objective score in contrast to the more personal review. Take this for example: I don’t like Stanley Kubrick’s films for the most part, but I am acutely aware of his importance, impact on cinema, influence, etc. So if I write a review for a film of his, I’m going to spend a good portion of the review arguing for why I think such and such was problematic, why I didn’t like this, etc. But I’m still going to give it a high score acknowledging its importance. So what… Read more »