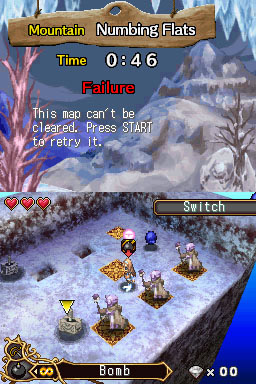 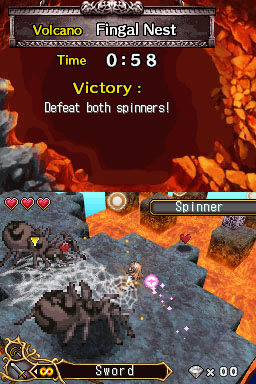 HIGH Riding on a single bullet when I've lined up enemies perfectly in its line of fire.

LOW Riding on a single bullet when I haven't lined up enemies perfectly in its line of fire.

WTF The rule stating that after every three levels comes a puzzle of soul-crushing hardness.

All Anise wants to do is steal precious gems and annoy the dwellers of the kingdom. But now an annoying fairy called Kukri won't leave her alone, and everyone keeps mistaking her for a hero. (They even want her to rescue a kidnapped Prince). Even worse, they all expect her to pay back all the debts that "the thief who looks like you, Hero" has incurred. What's a girl to do?

Why, steal things, of course. And maybe save that silly Prince.

In Steal Princess, thief turned reluctant hero Anise travels from room to room, armed with only her bullwhip (to start with, at any rate) and avoiding traps with two goals in mind: to get the key that opens the door to the next room, and to pocket as many gems as she can find. Anyone who's played The Adventures of Lolo or its sequels will recognize this setup, but Steal Princess manages to breathe new life into it while still retaining its warm and fuzzy sense of nostalgia.

While the game brings the "puzzle rooms" genre into the third dimension, there's more to its charm than a mere graphical update. Anise can do an awful lot of things with very few weapons. Her bullwhip is practically a Swiss Army knife: she can stun enemies with it, hit picnic basket-shaped Switches, grab onto things—including enemies—and swing from them. She also has an array of swords, bombs and shields. The latter are useful for not only blocking enemy projectiles, but pushing against stone and wooden blocks as well. Even the offensive weapons like swords and bombs take some ingenuity to use. Some can kill any kind of enemy; some have certain elements attached to them (flame, water, bolt, etc.) and can only kill enemies that share their elemental affinity. Thus, enemies might have to be killed in a certain order (killing all the red enemies gives the player a blue sword; killing all the blue enemies gives a yellow sword, and so on). Players might also find their weapons limited. A stage might give them only one blue lance even though there are three blue enemies: the trick is to line those blue enemies up so that one can run them through all at once.

Even the rooms' layouts are fraught with dangers; Anise must avoid spikes, or judiciously injure herself and run across them. There are pits to jump over and tiny platforms to ride. In one level, Anise finds two blocks near ledges opposite each other. When she pushes them off the ledges, the blocks fill the gaps between them so that she can run straight across—to the key-holding creatures floating up and down the middle in hot-air balloons, and to the bombs that will be their undoing. 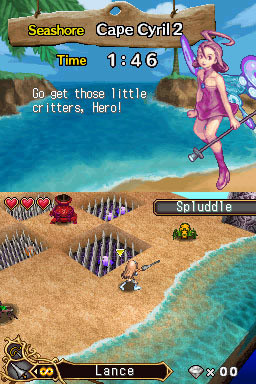 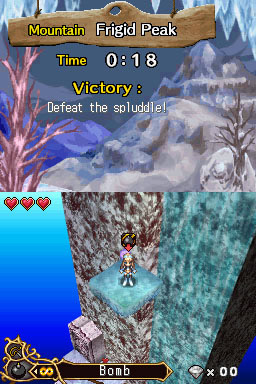 This kind of strategic planning carries over to boss fights, which are especially fun. On the 25th level in a world, Anise faces off against a minor demon named Lucretia. This demon turns into a giant bat that flies through the air on a circular platform, throwing bombs and shooting focused lasers. To hit the beast, Anise must use use her whip to grab onto the platform and swing up on top of it. The conditions for doing so change as the game progresses. On level 25, she just has to wait for the platform to stop spinning; on level 50, she needs to destroy the thunder clouds that float around it as well.

While Steal Princess's gameplay is enjoyable on its own, it's also got plenty of interesting characters. The game wreaks havoc with the "damsel-in-distress" trope. Like Becky Sharp in William Makepeace Thackeray's novel Vanity Fair, Anise isn't happy with the limited options for femininity (or, for that matter, for proper video game protagonist behavior) that are open to her. She's a reluctant hero, to put it midly: like the titular squirrel in Conker's Bad Fur Day, any good deeds she does are mere detours on the pursuit of her own interests, which have nothing to do with nurturing or supporting anyone. "Okay," she thinks to herself, "I'll rescue that Prince, but I'll steal whatever gems I find!" The always-optimistic Kukri tells Anise, "[Y]ou really don't make a good first impression for a hero." Anise responds, "Wanna see what kind of impressions I can leave…?"

Besides being female and not altruistic at all, Anise is also unique among video game heroes for being disabled. She has only one eye; over the other is an eyepatch. She and Kukri make passing references to it, but mostly this missing eye is just part of Anise. While her profession and less-than-chivalrous personality would in other circumstances make her a perfect disabled villain, in Steal Princess she is rescuing someone (no matter how much she wishes she wasn't), and she's the player character. Anise is the character we relate the most to, since we make all actions and decisions through her. Any power her disability might have to mark her as an "other" is negated by the fact that she is us.

If there's anything negative about Steal Princess, it's that the game's difficulty curve is like a sickly lawnmower. I breezed through the first 25 levels, then crashed, then found the next two very easy, then got stuck again, then charged through the next five levels—lather, rinse, repeat. This fit-and-start pace, while frustrating at times, did not sour my enjoyment of the game too much, though I did need a lot of breaks from it. All in all, Steal Princess is a game the likes of which I haven't seen for years, and it manages to feel fresh and familiar at the same time.Rating: 7.5 out of 10.

Disclosures: This game was obtained via publisher and reviewed on the DS. Approximately 14 hours of play were devoted to single-player mode and the game was not completed. No time was spent in multiplayer modes.

Parents: According to the ESRB this game contains: language, mild fantasy violence and suggestive themes. Older children should be fine with Steal Princess. While the title character is morally ambiguous, bitterly sarcastic and uses the occasional swear-word, she spends most of her time solving cartoonishly-violent puzzles. These puzzles can be very challenging, however.

Deaf and hard of hearing: All dialogue and mission information is in text, and there are no significant auditory cues. I played most of Steal Princess without sound and had no problems.