The Universe is Yours…And Everyone Else's 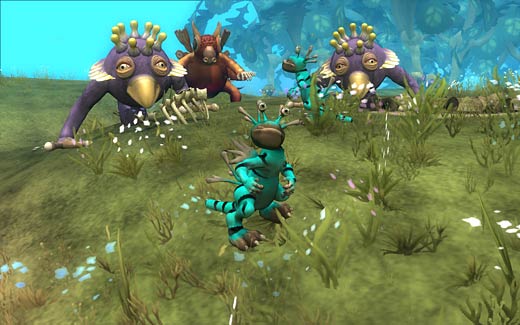 HIGH You can make any creature you want, do anything you want, and affect the environment in any way you want.

LOW The first four stages combined are much shorter and simpler than the last one, which is a little strange.

When I first heard whisperings about Maxis's plans for Spore, I was skeptical. Gameplay that focuses on evolving odd creatures? I could buy that: I've played Cubivore, after all. But promises that one's actions would affect everything in the game's virtual universe sounded like Peter Molyneux's outlandish press releases for Fable. And yet, if anyone could make good on such ambition, creator Will Wright was the man to pull it off. So I hoped. Cautiously.

My faith was handsomely rewarded.

Spore is a life simulation in the strictest, yet most open-ended sense. The player starts out as a single-celled organism; by fighting, mating, and eating the green (plant) or red (animal) matter in the primordial soup, the creature unlocks new body parts and weapons. Future stages involve more eating, fighting and mating, as well as increasing one's tribe members and building alliances with other groups. My Blooblops gave gifts, impressed other species with their quick-time event dance skills, played instruments for new friends (making sure to take requests, of course) and when a rival group challenged them, they could hop in their boats and airplanes and subdue them. Sometimes we had to destroy whole cities, but all's fair in love and war, right?

All this biological and cultural evolution, while fun, is really just a tutorial for the game's final "Space" stage—and that's not a bad thing at all. Once a civilization launches a space program, we test our micromanagement skills on the entire universe. We might trade spice with other races, run missions for our friends (and their money), and save planets from ecological disaster by killing sick animals. The most fun thing for me was "terraforming" planets. By fiddling with a planet's temperature and atmosphere (e.g. by using a heat ray to warm it up or a "cloud vacuum" to make it less dense) one can increase its "T-score" and thus, its ability to support life. The player must furnish the planet with plants to stabilize the raised T-score, and then fill out the ecosystem with herbivorous and meat-eating animals. Planets with high T-scores help players make more money and more friends. 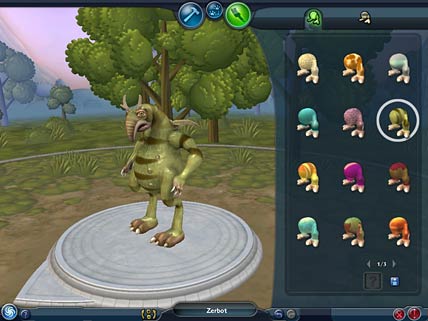 Spore plays like a combination of The Sims and Sim City on a scale I didn't think possible. Accomplishing this feat alone would've been enough to make it good; what makes Spore stand out is its innovative approach to multiplayer play. In this "massively single-player game," our actions don't just affect the worlds we make; they affect other players' as well. Things we make—houses, airplanes, living things—find their way into other players' star systems all the time. We can even control what creations visit whom by making buddy lists and Sporecasts: a way to let other players subscribe to your creations, after which they'll start start seeing your stuff in their game.

Equal parts game, social network and computer virus, Spore's story is one that only a video game can tell. It's collaborative fiction where all its readers are authors. Other people make your characters richer with their own ideas. While I always thought the Blooblops were a friendly, peaceful race, I checked my "My Spore" page and saw that someone else had declared war on them…and I wasn't even playing! I doubt Maxis would have to spend the time making new items or events as Blizzard does with World of Warcraft; players affect Spore's gameworld simply by existing. Such freedom is what gaming was made for.

Will Wright made a lot of promises with Spore, and he's delivered on all of them. He's taken the simulation-style gameplay he's known for to the next level, and redefined "multiplayer" in the process. Spore is not pie in the sky. Its ambitiousness will make history—in a good way. 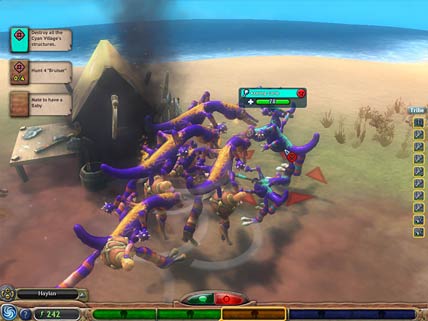 Disclosures: This game was obtained via the publisher and reviewed on a MacBook Pro running Mac OS X 5.3. Approximately 50 hours of play were devoted to the game. (The game was completed 1 time).

Parents: According to the ESRB, this game contains animated blood, comic mischief, and fantasy violence. This list makes the game's content sound a lot worse than it is. There's no bad language or graphic nudity to speak of, and while players can mate their creatures with other creatures, there's nothing explicit about it. (Just lots of cooing and cartoon hearts floating in the air). The game does involve waging wars against other tribes and species, but there's no gore involved: only explosions. Spore does download other people's creations into the player's game, but such downloads can be limited to a buddy list.

Deaf and Hard of Hearing: There should be no problems. All dialog is in text, and all auditory cues—the buzz when new transmissions come in from other empires, the "ding!" when a mission is completed—have visual cues as well.

it destroys a planet

Nice review. Good to see that it was playable on a MacBook Pro. 😀

I noticed your reference to Cubivore. I never finished that game. It’s one of those games I liked more in theory than practice, I guess.

But I didn’t learn what I most wanted to know: what’s a Planet Buster?